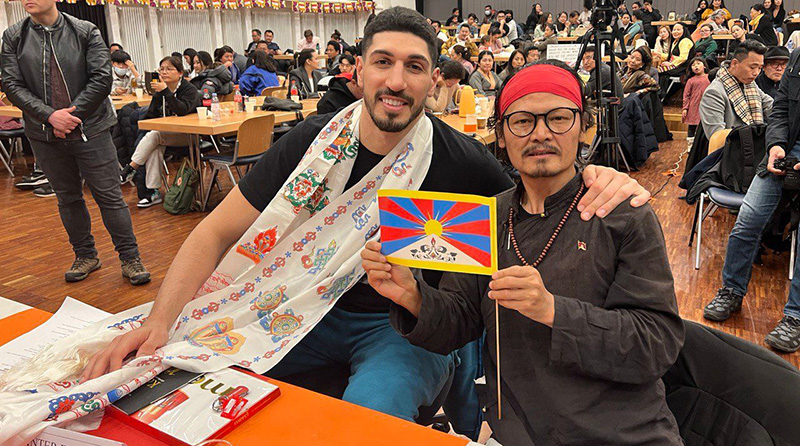 Zürich — Enes Kanter Freedom and Tenzin Tsundue were honoured by the Tibetan Community in Switzerland and Liechtenstein (TCSL) for their incredible work in the advocation of human rights. “Do not lose hope, fight for your country and your freedom, the Chinese Communist Party will come to an end one day and whatever we are having here right now, we are going to have that in Tibet,” said Kanter Freedom at the event.

Kanter, who was nominated for the Nobel Prize, had criticised China for its human rights violations, which led to his games being banned in China. Tsundue has criticised China's aggressive policies in his books and his activism has led to him being jailed 16 times in India. Their courage to continue their dynamic activism unhindered despite mounting pressure was applauded.

Kanter who received the Geneva Summit’s Courage Award 2022, was offered Khatak and Souvenir by the President of TCSL, Karma Choekyi. Kanter shared that he was honoured and felt special to be at the event as it was his first time meeting a community outside the USA. He emphasized that, “Today is not about me. it is about you. It is about hope, freedom and most importantly, it is about His Holiness the Dalai Lama”. He recounted how he grew up in Turkey after being born in Switzerland and how he became an activist by raising concerns about corruption and human rights violations in Turkey. He attributed the NBA's platform to the attention given to these issues in the United States and the rest of the world and expressed his determination to use this platform to further the cause of human rights.

On receiving backlashes for his activism, Kanter said, “Unfortunately, when you talk about the dictatorship (like that in Turkey), they are not going to like it. And as many Tibetans are going through right now, they put my dad in chains; he became a political prisoner. They revoked my passport and put my name on Interpol list. The last time I saw my family was in 2015.”

He then talked about his life in America and recalled a parent who had drawn his attention to China during a basketball camp. The parent questioned him on not talking about the persecution in China and Kanter promised to get back to him about it. He said that it was this incident that drew his attention to issues in China, Tibet, Taiwan, Hong Kong. He added that he felt ashamed for being so selective in his activism and promised himself to bring them to light.

He recollected that he wanted to be unique in his approach and hence came to the creation of a shoe – inspired from his childhood as a kid fascinated with the NBA players’ shoes; thus, reaching out to the younger generation. He added that the first topic of his shoes was Tibet and how that game was an opportunity to spread awareness about Tibet issues and their condition. He remembered getting to know during halftime that the game was being banned in China because the dictatorship was scared.

Kanter, who followed His Holiness on social media early on, was inspired by his teachings and wanted to talk to him. They later met on the zoom and Kanter recalls being nervous before speaking. Kanter was wearing a T-shirt that said "freedom", which set the tone for their conversation, during which Kanter clarified many of his doubts.

He knew that if every person in the world followed His Holiness' message, there would be no war in the world. He concluded by telling the Tibetan community that "the most important thing is not to lose hope. Because if you lose hope, you lose everything. You have to fight for your people, you have to fight for your country and you have to fight for freedom, because if you look at history, all dictatorships come to an end and I know that the Chinese Communist Party will come to an end one day and whatever we have here now, we will have in Tibet. He jokingly concluded that momo was the best food in the world and that he should take some with him. He thanked the community and urged them to let the world know that Tibet belongs to the Tibetans. Kanter then added that this was the beginning of a beautiful friendship and promised to come back with a basketball camp for the children.

Kanter's speech was followed by cultural performances. After the performance, Ven Thupten Wangchen la, Member of the Tibetan Parliament in Exile, Dharamsala, addressed the gathering on behalf of the Tibetan Parliament in Exile. He began by thanking Kanter for taking time out of his busy schedule to speak with them. He praised Kanter's efforts to defend human rights and speak out on behalf of Tibetans and other communities oppressed by the Chinese government.

He mentioned that Kanter's words are a comfort to the peace-loving Tibetan people who follow the message of His Holiness the Dalai Lama, Mahatma Gandhi, and non-violence. Ven Wangchen also praised Kanter's courage and determination and conveyed the gratitude of the Tibetan community. He assured Kanter that Tibetans will not lose hope and asked for the support of the international community. He urged Kanter to remain strong despite the pressure he is under. He concluded by presenting Kanter with a token of appreciation on behalf of the Parliament of Tibet in Exile. Afterward, the President of the Tibetan Youth Association in Europe and the Tibetan Women's Association in Switzerland thanked Kanter by offering tokens of appreciation.

The next prominent person to be honoured was Tenzin Tsundue, a renowned Tibetan author. His activism was appreciated by the Tibetan community for his relentless struggles for the freedom of Tibet. Tsundue addressed the gathering, inspiring and delighting the audience. The gathering concluded with cultural performances.