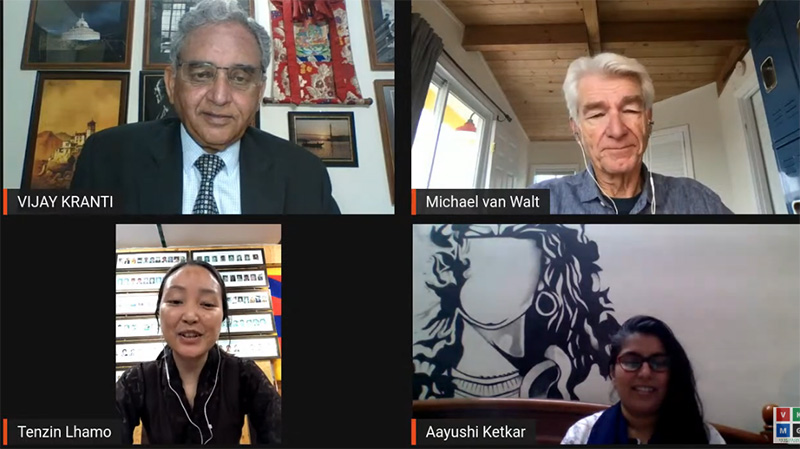 New Delhi — “We should hope the world will soon stand firmly against other aggressions and behind occupied countries like Tibet, which—like East Turkestan and Southern Mongolia—have been under Chinese colonial rule over the past many decades.”: says Prof Michael Van Walt

“An interesting outcome of the events in Ukraine today is that it has produced an almost unanimous condemnation of aggression by a big country against its smaller neighbor. I hope it will help the world community to revive its memory about how a big nation like China used force to occupy the weaker neighboring nations Tibet and imposed its own interpretation of history and law. The arguments being forwarded by President Putin of Russia today and the manner in which Russian Army has invaded Ukraine have too many similarities to ignore how China occupied Tibet in 1950-1951”, says Prof Michael Van Walt Van Praag, a renowned international law jurist who specializes in international conflict resolution.

Michael is currently a Senior Fellow at the Sompong Sucharitkul Center for Advanced International Legal Studies in San Francisco, has played important role in quite a few conflict situations like Chechnya and Abkhazia-Georgia dispute and has been a legal adviser to the Tibetan government-in-exile and the Dalai Lama. He was speaking last night from California at an international live webinar, based on his discussion with Vijay Kranti, a renowned Indian Tibetologist. The webinar organized jointly by the Centre for Himalayan Asia Studies and Engagement (CHASE) and the Tibetan Youth Congress (TYC) was focused on famous book “Tibet Brief 20/20”, jointly authored by Prof. Michael and Dr Miek Botjes.

Answering to a question from Vijay Kranti, the host of the show and Chairman of CHASE, Michael said, “The aggressive conduct of China in many areas including the South China Sea, the Taiwan Strait, Indian Himalayas and the Central Asia has shaken the world community, especially the Western countries, out of their slumber. The invasion of Ukraine by Russia has now made the world sit up and realize that it has been appeasing China and accepting, at least implicitly, false claims and narratives of present day People’s Republic of China (PRC) about the Asian history, including Tibet, East Turkestan and Southern Mongolia” he said. “We should hope the world will soon stand firmly against other aggressions and behind occupied countries like Tibet, which—like East Turkestan and Southern Mongolia—have been under Chinese colonial rule over the past many decades. Crushing of human rights in these regions by the Chinese communist regime and exploitation of their natural resources violates international law and triggers obligations for the international community,” he added.

Pointing out a major mistake of the international community, Michael said that the diplomats, historians, academicians and the media have largely relied on the Chinese sources on the Asian history to make their opinions and decisions about many Asian countries. The worst example is buying the Chinese idea of ‘seamless inheritance’ of Tibet and Mongolia first by the ‘Republic of China’ in 1912 and then by the PRC in 1949. “The reality is that the real China was the Chinese provinces and some contiguous areas which were ruled by the Chinese ‘Song’ and ‘Ming’ dynasties. Not the empires of the Mongols and the Manchus that conquered them.” It is absurd that today the Chinese communist rulers want the world to accept their narrative of ‘seamless inheritance’ to claim that since the Mongols occupied China and subjugated Tibet therefore Tibet is a part of China,” he said. “But it is heartening to see now that the world has started looking at Asia also from non-Chinese perspectives like that of Russian, Mongolian, Manchu and Tibetan historians to understand the real history of Asia,” he added.

Michael cautioned the world governments, diplomats, the academics and especially the international media to stop using certain terminology which the Chinese rulers have been trying to spread through a very systematic and refined propaganda. Giving examples he said that referring to the Tibetans, the Uyghurs and the Mongols as ‘ethnic minorities’ of China is an acceptance of Chinese claims that they are an integral part of a wider Chinese population. But the reality is that all of them are distinct ‘peoples’ and belong to three different nations, namely Tibet, East Turkistan and Mongolia which were ‘occupied’ in recent history. In international law an ‘ethnic minority’ in a country may have some rights but they cannot claim full self-determination rights.

Similarly, another great blunder being committed by the world governments and diplomatic community is referring to the Sino-Tibetan conflict as an ‘internal matter’ of China. By doing so the world community is failing not only in its legally bound duty of opposing the illegal occupation by China but it is rather providing a semblance of legitimacy and acceptance of China’s forcible colonization of Tibet and other regions by China. “This is nothing short of playing as an accomplice of China in its act of aggression, invasion and occupation,” he added.