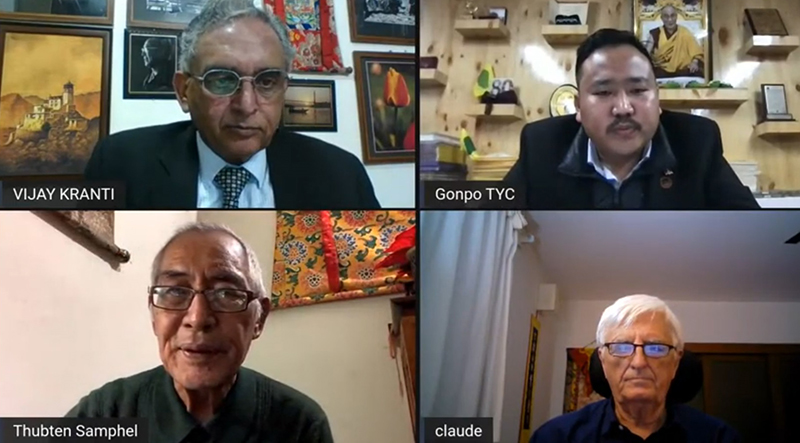 New Delhi — "President Xi Jinping’s over enthusiasm in insisting that “Tibet has been always a part of China” and his aggressive expectation from the world community to accept China’s similar claims over Xinjiang, South Mongolia and other occupied countries has exposed the guilt conscience of China over its colonial rule over these countries," said Vijay Kranti, a renowned Tibetologist and Chairman of CHASE, .

Unchallenged control over the vast geographic areas and huge natural resources of these colonies has only emboldened and encouraged present day China to behave like a bully with the world community. Hence it is in the interest of the world peace and world order that the international community join hands to support these colonised nations to regain their independence from China’s illegal rule. These common points emerged from an international webinar “Tibet Was Never a Part of China”, organised to mark the 109th anniversary of the ‘Proclamation of Independence of Tibet’ by the 13th Dalai Lama of Tibet on 13th Feb 1913.

On February 12, 2022, on the eve of the 109th anniversary of Tibetan Independence Day, the Centre for Himalayan Asia Studies and Engagement (CHASE) and the Tibetan Youth Congress (TYC) organised an international webinar on the theme "Tibet was never a part of China" to mark the 109th anniversary of the ‘Proclamation of Independence of Tibet’. The speakers were Thubten Samphel, Claude Arpi, Aayushi Ketkar, Vijay Kranti and Gonpo Dhondup.

Referring to China’s aggressive claims over Tibet, Thubten Samphel, a prominent Tibetan scholar and founder Executive Director of Tibet Policy Institute said, “Today when President Xi Jinping’s China makes claims that Tibet has been a part of China on the basis of the Mongol and Manchu influence over Tibet then he and his Communist Party of China should not forget two basic historic facts. One is that China itself was occupied and ruled by the Mongols and the Manchus as foreign occupiers of China. Therefore, as an occupied country itself, China cannot make claims on other areas of influence of its own occupiers. The other fact is that at some stages in history Tibet too was a powerful empire who had ruled over China and had pushed out the Chinese Emperors and occupied their capital which is currently called Xian, the host of ongoing Winter Olympic Games today.”

Samphel pointed out that the Communist rulers of today’s China are trying to rewrite the history in order to justify their forced and colonial occupation of Tibet, East Turkistan (Xinjiang), South Mongolia and Manchuria. Talking about the Mongol-China-Tibet relations in history, Samphel said that while the Mongols conquered Tibet, China and many other countries, they acted as the occupiers and rulers of China whereas their relations with Tibet and its rulers was of priest-patron type. Giving examples of Kublai Khan’s devotion towards the 3rd Dalai Lama of Tibet, Samphel said, “President Xi should not forget that during the rule of Kublai Khan over China, he ran a massive genocide of the Hans in China. Then it was the Chinese King who begged the Dalai Lama of Tibet to use his influence over his disciple Mongol Emperor to show mercy on the Hans. It was only after Dalai Lama’s intervention that Kublai Khan agreed to stop the massacre of Hans.

Commenting on the British idea of China’s ‘suzerainty’ over Tibet, Samphel referred to Lord Curzon’s own admission about this being a ‘constitutional fiction’ which was manufactured by Britain to protect its own and China’s interests in Asia by keeping the Zarist Russia out of Tibet.

Claude Arpi, a prominent French Tibetologist who has settled in India since many decades, presented a detailed analysis of the Tibetan issue in the light of India-China relations to assert that the colonial occupation of Tibet has hurt India’s national interest more than that of Tibet. “It is therefore in the interest of India to support Tibet to regain its independence from the Chinese colonial rule,” he said.

Referring to the proclamation of independence of Tibet on 13th February in 1913 by the 13th Dalai Lama, Arpi said that Tibet possessed every element like its own flag, currency, postal system, foreign relations and international treaties with countries which included British India, Nepal and Mongolia which prove its status as an independent nation. It maintained this independent status till the day the Chinese army marched into Lhasa in 1951.

He branded the ‘Panchsheel-Agreement of 1954 between India and China as the last nail in the coffin of India’s national interests vis-à-vis China. He said that by consistently shying away from taking a morally and politically correct stand on Tibet, India has willfully surrendered all the advantages it had inherited in Tibet from the British Raj. “Indian government has been doing this with the hope of buying peace with China. But giving in too much in the hope of peace is a sure recipe of inviting war. And this is exactly what India has achieved by adopting this approach towards China on issues related to Tibet,” he said.

Arpi referred to the common phrase “Don’t rock the boat,” used frequently by the Indian foreign policymakers about their policy towards China on Tibet. “Now that China’s presence in Tibet has become a serious threat to India’s own sovereignty and national security, India will have to finally gather the courage to rock the boat on the issue of Tibet,” he said.

Calling the Chinese claims over Tibet as ‘part of China’ during history as a ‘laughable fiction’ of President Xi Jinping and his CCP, Vijay Kranti, a renowned Tibetologist and Chairman of CHASE, said that China should not forget that the Chinese emperors took 2300 years to build the 21,196 km long ‘Great Wall of China’ around their country to protect themselves from foreign attacks. These attackers were none other than the Mongols, Manchus, Tibetans and Uyghurs, etc whom they are today claiming as ‘inseparable parts of China'.

Presenting well established and internationally known historic facts about China, Kranti said that before the present day China asserted its personality as the ‘Republic of China’ in 1912 no independent China existed for 296 years (1616-1912). It was ruled by the Manchus during this period who came from Manchuria. The Asian history shows that the Mongols and Manchus had occupied and ruled over the Song and Ming Chinese Empires for 784 years along with many other countries. China was just one of many countries like Mongolia, Tibet, Korea, East Turkistan, Russia, Afghanistan and most of Central Asian countries which were conquered by the Mongol Dynasty.

In her remarks, Prof. Aayushi Ketkar of Jawahar Lal Nehru University, an expert in international strategic affairs said, “It sounds hilarious when present rulers of China claim the Mongol Emperor Genghis Khan as the ‘Great Son of China’ and stake claims over Tibet, East Turkistan (Xinjiang) and South Mongolia on the ground that they were part of the Mongol Empire in history. Going by President Xi Jin ping’s logic today India can also claim Australia and an ‘inseparable part of India’ or New Zealand can lay its sovereignty over India on the basis that all three were occupied and ruled by Great Britain at some stages of history.”

In his vote of thanks as the co-host of the webinar Gonpo Dhondup, the President of Tibetan Youth Congress (TYC) said that China is in illegal occupation of Tibet for over seven decades now. “China’s illegal presence in Tibet has not only taken away the freedoms and independence of the people of Tibet but it has also created many security problems and threat to peace for most of the other countries bordering Tibet. To justify this illegal presence of China in Tibet, the Chinese government and its propaganda machinery are engaged in creating a false narrative through a deliberately manufactured history to claim that Tibet has been always a part of China,” he said.

Expressing the resolve of the Tibetan people to regain Tibet’s independence Gonpo said that TYC will continue its non-violent struggle to achieve this goal of an independent and free Tibet. “It is in the interest of all Asian countries, especially India, to support Tibet’s independence struggle. An independent Tibet, free from the Chinese presence in this part of Asia is a sure guarantee of peace and prosperity not only for entire South Asia and Asia but also for the world community,” he concluded.