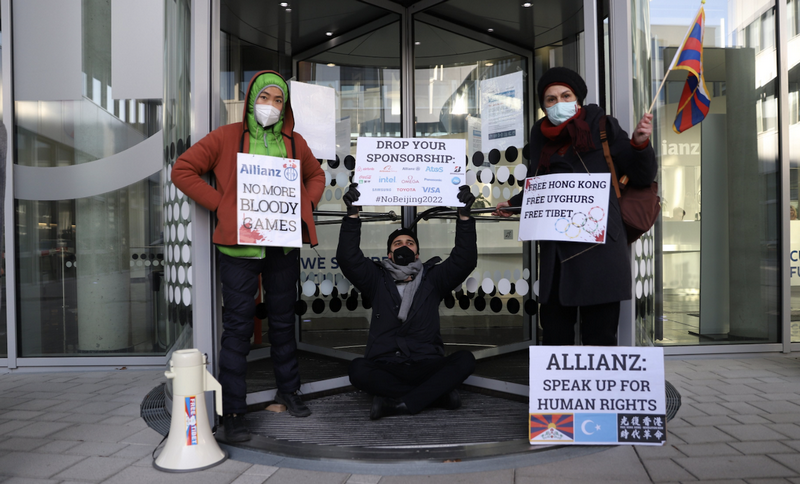 Activists chain themselves to the doors of Allianz headquarters in Berlin on 21 January 2022 to protest against the company's sponsorship of the Beijing Olympics. Photo: TPI

Berlin—Tibetan, German and Jewish activists chained themselves to the doors of Allianz's headquarters in the German capital Berlin to demand that the company withdraw its sponsorship of the Beijing 2022 Winter Olympics, which they describe as the "Genocide Games".

The organisers told the TPI that "the activists are currently chained to the doors of the Allianz headquarters in Berlin while holding a large banner which reads “Allianz: Drop the Genocide Games!”

"Two weeks before the start of the Beijing 2022 Winter Olympics, they are taking this action to demand that Allianz immediately and unequivocally end its sponsorship for Beijing 2022, dubbed the “Genocide Games.” they added.

"As of 11:00am CET, activists are still locked to the doors of the building and there are four police officers at the scene," they stated in a statement released on the same day.

Two activists (one Tibetan and one Jewish) peacefully walked to the entrance of Allianz, sat down, at 10:00am CET and proceeded to lock themselves to the doors of the building. They then began chanting slogans such as: “We fight for Tibet’s liberation. Don’t support Chinese occupation!”

This action comes more than two weeks after activists from Tibet Initiative Deutschland (TID) dropped off a petition to Allianz with more than 46,000 signatures calling on the company to cancel its deal with Beijing 2022. TID gave the insurance giant two weeks to respond, but received no reply.

“I was born in Tibet and had to flee my homeland when I was 6-years-old. I never thought that the struggle for basic human rights would take so long. Allianz is supporting an Olympic Games in a country that oppresses Tibetans, Uyghurs, and Hong Kongers," said Padma Wangyal.

"Our tradition and culture will be wiped out if we allow companies to be complicit in China's cultural genocide. My demand from Allianz is simple: do not put business contracts above human lives,” added Wangyal, a 73 year-old, Tibetan activist locked to Allianz’s doors.

“80 years ago Allianz supported a genocidal regime. Allianz says it has dealt with its history of supporting the Nazis. But the sponsoring of the Genocide Games in China makes it clear: Allianz is only pretending to have come to terms with its shameful past," said Mischa Ushakov.

"Even decades later, its Nazi money follows the principle of profit before morals. Allianz knows about the Uyghur genocide, but it keeps silent and is thus complicit,” said Ushakov, a 23 year-old German Activist and Co-Founder of Never Again Right Now, who is the other activist locked to Allianz’s doors.

“For the past year, we have been trying to get Olympic sponsors like Allianz, Mars, Airbnb, and others to take our human rights concerns seriously, but to no avail," said Tenzin Yangzom, Grassroots Director at Students for a Free Tibet.

"That is why activists were forced to peacefully take action today—to demonstrate to Allianz that their sponsorship of the Genocide Games makes them complicit in China’s human rights abuses. I hope that any corporate CEO or business leader that sees today’s action will recognize that partnering with the CCP has consequences,” Yangzom further added.