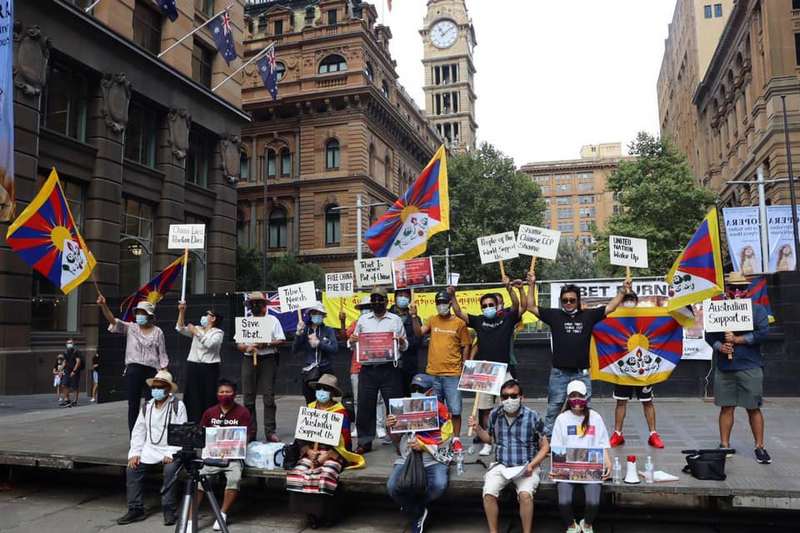 Tibetans and supporters gathering at Martin Place, in the heart of Sydney, NSW, Australia, at 10am on Wednesday 12 January 2022. Photo: TPI

Sydney — Tibetans, supporters and activists peacefully gathered at Martin Place in the heart of Sydney, NSW, Australia, at 10 am on Wednesday morning, 12 January 2022, to protest against the demolition of a 99ft tall Buddha statue in Tibet by the authoritarian Chinese government and to urge peace-loving people and countries to support an end to China's continued occupation and destruction of Tibet.

Protestors hoisted the national flags of Australia and Tibet, as well as banners and posters with slogans such as "The Australian people support us", "Long live the Dalai Lama", "Save Tibet", "The people of the world support us", "Tibet is not part of China", as well as "Stop torture in Tibet", "Free Tibet" and "Free China". While shouting these slogans, they also called on China to end its genocide and repressive policies in Tibet.

"The people at this rally are either Tibetans or friends and supporters of Tibet who are helping to draw attention to the recent destruction of the Buddha statue in Tibet and China's ongoing cultural genocide in their homeland, Tibet. We are encouraged that more and more Australians are becoming aware of the plight of the Tibetan people and joining us in supporting our advocacy," said Tsudu Oser, President of the Tibetan Youth Congress Sydney (TYCS).

"Since the "Xunhua Incident" in April 1958, considered by many to be the precursor to the 1959 uprising in Tibet against annexation (1950-1951) and the increasingly brutal control exercised by the Chinese Communist Party (CCP), when the so-called People's Liberation Army (PLA) forcibly removed Tibetan demonstrators, resulting in an estimated 87,000 casualties and thousands of deaths, the situation has gone from bad to worse. It is now estimated that more than 1.2 million Tibetans have lost their lives in the struggle for Tibetan freedom," TYCS said in a statement.

'The People's Republic of China (PRC) has controlled Tibetans inside Tibet with an iron fist, destroyed over 6,000 monasteries and institutions, employed sophisticated strategies to discredit and destroy Tibetan cultural identity, has even conducted campaigns discouraging the use of the Tibetan language and disappearing Tibetan language scripts, while relocating massive Chinese populations to different parts of Tibet, who often blame Tibetans for any incident as splitters, furthering its expansionism, occupation and colonisation,' it added.

'The tyranny and fear of being a Tibetan under such an oppressive regime are palpable, even when talking to Tibetans who have successfully fled their country, as they still fear for their family and friends who are still trapped in Tibet. For these reasons, all Tibetans who live in and enjoy the safety and freedom of these free countries feel a personal responsibility to represent, speak up for and get help for their loved ones who are suffering greatly in Tibet,' TYCS concluded.

'As you may be aware, the Chinese authorities recently demolished a revered 99-foot tall Buddha statue built in Draggo County, Kham, Tibet, on the basis that it was too high. Arbitrary destruction, evictions, arrests and imprisonment continue in the county, totally against the will of the Tibetan Buddhists in the county,' the Sydney Tibetan Volunteers Group (STVG) said in a press release, adding: "This also curtails the Tibetan people's rights of worship and conscience".

"In addition, a Tibetan Buddhist institute was forcibly closed and monks and students were forcibly evicted, detained and physically beaten and severely tortured," the document adds.

"To address this new development, an already urgent situation, we, the Sydney Tibetan Volunteers Group and the Tibetan Youth Congress Sydney have co-organised a protest against China's belligerent act, in solidarity with Tibetans inside Tibet," said STVG President Jigme Dorjee.

China's authoritarian communist regime has destroyed a 99-foot high Buddha statue and 45 prayer wheels in Draggo County, Kham, Tibet. In addition, they also forced the monks of Gaden Namgyal Ling Monastery and local Tibetans to watch the demolition of the sacred statue, which began on 12 December and continued for nine days.

Local Tibetans and monks said they had all the legal documents for the construction of the giant Buddha statue, however, the Chinese authorities demolished it six years after its construction. The Buddha statue was established in 2015 with the financial support of local Tibetans in Draggo County, Kham, Tibet, to prevent starvation, war and disasters of fire, water, earth and air.

The bronze statue was constructed at a cost of about 40,000,000 Yuan (about 6.3 million USD). In 1973, the Tibetan county was on the scene of a major earthquake that caused extensive damage. The monument was built on 5 October 2015, as a precaution against natural disasters.

New local sources are saying that at least 11 monks from the monastery have been arrested by the authorities on suspicion of sending out information and photos of the destruction of the statue outside Tibet.

The sources also said that the three-storey statue of Maitreya Buddha (Tibetan: Jetsun Jampa Gonpo) was also demolished by the Chinese authorities in the same county recently, after the total destruction of the 99-foot high Buddha statue and smashed 45 prayer wheels in Tibet. Following the arrests, demolitions and crackdown in Tibetan County, the Chinese authorities have stepped up massive surveillance throughout the county and its surroundings, installing thousands of new CCTV cameras.

Over the past 70 decades, political repression, social discrimination, economic marginalisation, environmental destruction and cultural assimilation have continued, particularly as a result of Chinese immigration into Tibet, which fuels intense resentment among the population of occupied Tibet.

China's communist-totalitarian state began its invasion of Tibet in 1949, reaching full occupation in 1959. Since then, more than 1.2 million people, or 20% of the country's six million population, have died as a direct result of the Chinese invasion and occupation. In addition, over 99% of Tibet's six thousand monasteries, temples and religious shrines have been looted or decimated, resulting in the destruction of hundreds of thousands of sacred Buddhist scriptures.