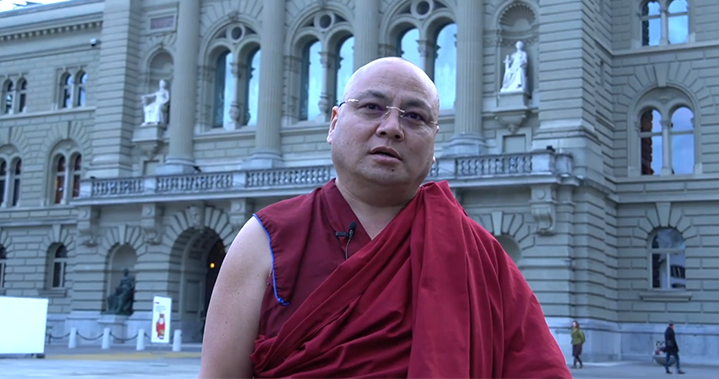 Lausanne, Switzerland — Former Tibetan political prisoner and activist, Ven Golog Jigme in Switzerland urges the Swiss Government to issue a public boycott of the Beijing 2022 Winter Olympics and send a strong message to the Chinese government.

On January 11, 2022, former political prisoner and activist in Switzerland, Ven Golog Jigme issued an appeal to the Swiss government to boycott the upcoming Winter Olympics 2022 in Beijing, China.

Ven Jigme, an activist associated with the Tibetan Youth Association in Europe, stated, “As a refugee, I feel immense gratitude towards my government. However, the Winter Olympics will be held in China this year. Now, many governments in the world have publicly stated that they will not be going to these Games.”

He urged his host nation Switzerland by saying, “My appeal to the Swiss government is to boycott these Games, this is my hope. So most importantly, they should publicly declare the boycott of the Winter Olympics in China, that is my request.”

Golog Jigme, also known as Jigme Gyatso, helped Tibetan filmmaker Dhondup Wangchen to film "Leaving Fear Behind" in 2007/2008. The 25-minute film features interviews with 108 Tibetans living in the Amdo region of Tibet who express their views on Tibet's exiled spiritual leader, His Holiness the Dalai Lama, the 2008 Beijing Olympics, and the difficulties of living under Chinese rule, topics considered politically sensitive by the Chinese regime.

Ven Jigme was arrested in 2008 and sentenced to seven months in prison, during which time he was beaten and tortured. He was released in October 2008 and arbitrarily detained again in 2012. He has been arrested by the Chinese authorities on at least three occasions during his time in Tibet.

He was severely tortured after he was first detained in March 2008, hanging from the ceiling for many hours with his hands and legs tied behind his back, and he lost consciousness several times because of beatings by Chinese security forces.

Ven Jigme escaped to India in 2014 and moved to Switzerland in 2015, where he was granted asylum. He has participated in protests against China being given the right to host the Winter Olympics in 2022. He has been an active participant in urging the Swiss government to take action along with compatriot and well-known Tibetan filmmaker and former political prisoner Dhondup Wangchen.

With the Winter Olympics less than a month away, the #NoBeijing2022 campaign has gained worldwide support and many governments have declared a diplomatic boycott of the Games. In Europe, many Tibetan human rights organisations have urged governments to follow the example of the US, UK, and Canada and send a strong message to the Chinese government by boycotting the upcoming Games.