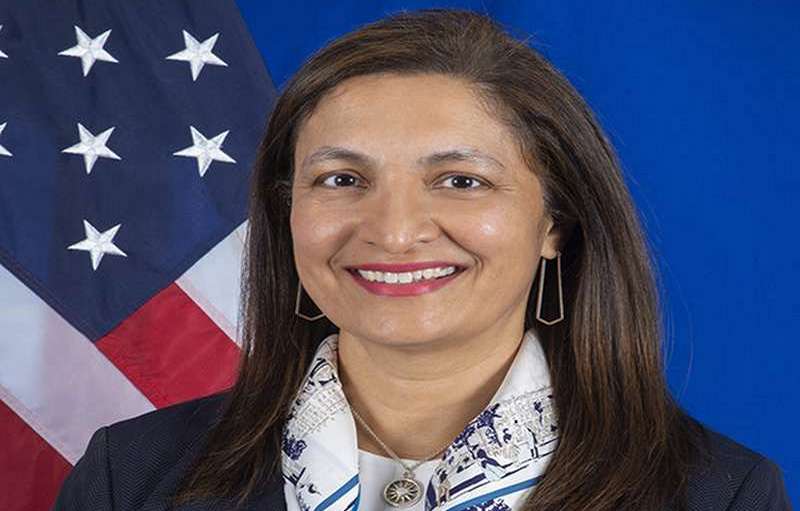 US special coordinator for Tibet issues, Uzra Zeya. Photo: US Department of State

Washington, DC — “Direct dialogue without preconditions between the government of the People's Republic of China and His Holiness the Dalai Lama or his representatives, is essential to resolve differences and achieve meaningful autonomy for Tibetans,” said the new U.S. Special Coordinator for Tibetan Issues Uzra Zeya.

On December 20, 2021, Secretary Blinken announced that Under Secretary of State for Civilian Security, Democracy and Human Rights Uzra Zeya has been appointed as the new U.S. Special Coordinator for Tibet Issues.

“Secretary Zeya will serve as the Special Coordinator for Tibetan Issues. She will coordinate U.S. efforts to advance the human rights of Tibetans, including freedom of religion or belief; increase access to the region; protect the environment and sustainably manage water resources of the Tibetan plateau; and address the humanitarian needs of Tibetan refugees and Tibetan diaspora communities, many of whom continue to face threats, including in the United States,” said Secretary Blinken in a statement, where he announced Zeya’s new designation.

“I am honored to serve as the U.S. Special Coordinator for Tibetan Issues. I am committed to promoting respect for the human rights of Tibetans and helping to preserve their religious, cultural, and linguistic heritage,” Zeya wrote on her Twitter.

“Direct dialogue without preconditions between the government of the People's Republic of China and His Holiness the Dalai Lama or his representatives, is essential to resolve differences and achieve meaningful autonomy for Tibetans,” the new U.S. Special Coordinator for Tibetan Issues said.

“We also seek to increase access for U.S. diplomats and other officials, journalists and tourists to the Tibetan autonomous region and other Tibetan areas in reciprocal to the access PRC officials and other Chinese nationals enjoy in the United States,” she said.

She called for the PRC to cease its harassment, intimidation, and surveillance of Tibetan diaspora communities in the United States and elsewhere. She added that such acts, known as transnational repression, undermine the collective security of the United States.

“The United States seeks to support and protection of environment and water resources of the Tibetan Plateau, which provides water shared by billions of people across Asia,” Zeya added.

“Finally, we are proud to be providing humanitarian assistance to Tibetan refugees, including lifesaving assistance and protection services, to the most vulnerable and to supporting opportunities to enhance their livelihoods,” she further added.

“As special coordinator. I look forward to taking on these challenges and working closely with Tibetans and other partners to advance our shared goals. Thank you,” Zeya concluded.

Although Zeya is new to the role of special coordinator, she is not new to the issue of Tibet. In 2013, while serving as Acting Assistant Secretary of state for Democracy, Human Rights and Labor, Zeya led a US delegation to meet with Chinese counterparts as part of the 18th US-China Human Rights Dialogue in Kunming, China.

After the meeting, she told reporters that the delegation was “expressed deep concern about China’s stepped-up attempts to silence dissent and tighten controls over Tibetans and Uighurs, emphasizing that policies ostensibly designed to maintain stability are counterproductive when they deny Chinese citizens their universal human rights and fundamental freedoms.”

“We also urged the Chinese government to engage in substantive dialogue with the Dalai Lama or his representatives, without preconditions,” she said. Zeya also raised with Chinese officials the case of Dhondup Wangchen, a Tibetan filmmaker who was arrested and tortured by Chinese authorities after he made a documentary about China’s repression in Tibet before the 2008 Beijing Olympics.

Prior to her appointment as Special Coordinator, Zeya was sworn as Under Secretary for Civilian Security, Democracy, and Human Rights by Secretary Blinken on July 14, 2021. From 2019 to 2021, she served as president and CEO of the Alliance for Peacebuilding, a non-partisan global network of more than 130 organizations working in more than 180 countries to end the conflict by peaceful means.

She has also worked at the U.S. Embassy in New Delhi as a political-minister counsellor, in addition to Deputy Chief of Mission and Charge D’affaires in Paris and postings in West Asia and North Africa.