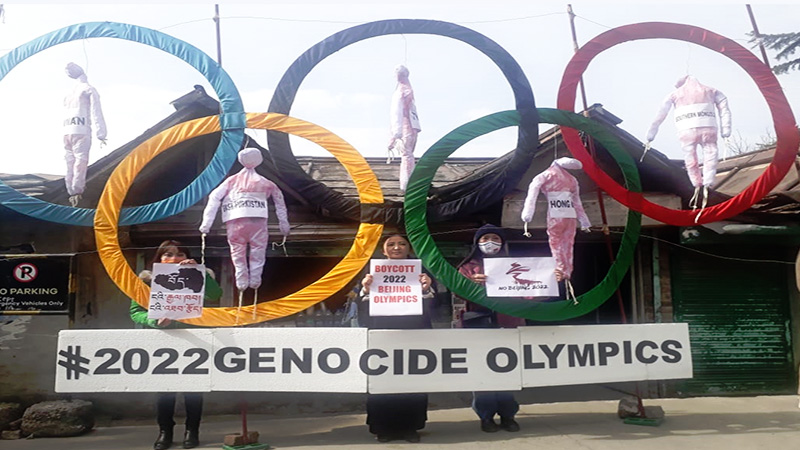 Dharamshala, India  — The United States has announced a full diplomatic boycott of the 2022 Winter Olympics in Beijing due to Chinese human rights abuses in East Turkestan, Tibet, and Hong Kong. Several other countries, including Australia, Lithuania, United Kingdom, Canada and New Zealand, have already joined the move, while others are expected to join the boycott soon.

On December 6, 2021, the U.S. government announced that its officials will boycott the 2022 Winter Olympics in Beijing, China. An official statement from the White House confirmed that no American public or political dignitaries will attend the opening or closing ceremonies due to the ongoing human rights violations by the Chinese government. President Joe Biden cited the genocide of the Uighurs in the East Turkestan and the crackdown on pro-democracy protests in Hong Kong as reasons for the decision.

Many U.S. lawmakers have advocated calling for a diplomatic boycott. U.S. House Speaker Nancy Pelosi said the move was a protest against China's human rights abuses. While officials are not going, U.S. athletes are free to travel to Beijing for the games.

“Sending official representation would signal that the Games were business as usual. And we simply can't do that," said White House press secretary Jen Psaki.

New Zealand has announced months ago that it will not be sending a delegation to the 2022 Winter Beijing Olympics. New Zealand Deputy Prime Minister Grant Robertson said, "We've made clear to China on numerous occasions our concerns about human rights issues.”

Taiwanese legislators from New Power Party (NPP) made a call to boycott the Games at a press conference on December 1, 2021. They said that China is not qualified to host the Olympics due to its ongoing human rights violations against people of various ethnic groups, religious beliefs, and sexual orientations, which is exactly the opposite of what is written in the Olympic Creed.

Several Tibetan organizations and activists welcomed U.S. President Joe Biden's decision and urged all like-minded governments to do the same, taking bilateral and multilateral action. Over the past few months, Tibetan activists have protested the Beijing Olympics by organising protests and motorcycle rallies and holding banners with the slogan “NoBeijing2022”.

“This statement of courage and leadership is a testament to the tireless work of Tibetans, Uyghurs, Hongkongers, Southern Mongolians, Taiwanese and Chinese people, among others, who have been working tirelessly to urge governments, sponsors, and broadcasters to withdraw support for Beijing 2022. Not only does this high profile move show solidarity with impacted communities, who have faced the momentous escalation of repression that followed the 2008 Beijing Summer Olympics, it also sets an example for other governments to follow,” said a joint statement from International Tibet Network, International Campaign for Tibet, Students for a Free Tibet, World Uyghur Congress, Southern Mongolian Human Rights Center, and Free Tibet.

“Over the past year, several parliaments have voted overwhelmingly in favour of government boycotts or acknowledgments of China’s mass human rights atrocities. In the light of President Biden’s announcement, we are now expecting the UK, Canada, the Netherlands, and the European Union to take immediate action and commit to rejecting invitations to the opening and closing ceremonies of Beijing 2022 on human rights grounds,” the statement added.

"The Chinese government is using the 2022 Winter Games as a showcase for its world leadership. A diplomatic boycott sends a strong signal: governments refuse to give a green light to the Uyghur genocide," said Omer Kanat, Executive Director of the Uyghur Human Rights Project.

Many see the announcement as an important first step toward holding China accountable and ensuring that the international community stops legitimizing the Chinese government's genocide against the Uighur and other minority communities. More countries, including Japan, and France, are expected to join the boycott.