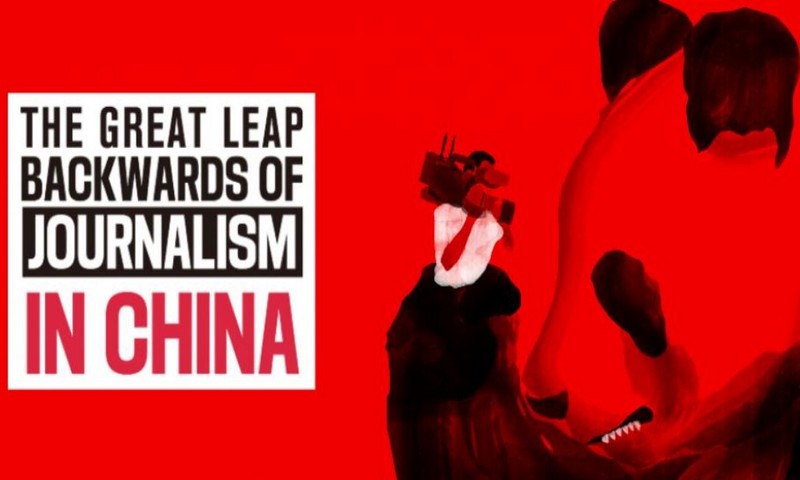 Paris —  The Great Leap Backwards for Journalism in China", a report published by Reporters Without Borders (RSF), reveals the Chinese regime's unprecedented campaign of repression against journalism and the right to information around the world in recent years.

This is a report that reveals reveals the Chinese regime's unprecedented campaign of repression against journalism and the right to information around the world in recent years, following two years after the continuation of the new world media order in China.

"Published a year before the Chinese Communist Party's 20th National Congress, which will take place at the end of December 2022, The Great Leap Backwards of Journalism in China is a damning 82-page document that demonstrates the acceleration of China’s violations against its own international commitments to freedom of opinion and expression," the RSF said.

The report, published on 7 December 2021 by the Paris-based international press freedom organisation, reveals the Chinese regime's "unprecedented campaign of repression against journalism and the right to information" all over the world in recent years.

The media watchdog condemns China's authoritarian regime led by President Xi Jinping and criticises the violations of press freedom in China by saying: "The Great Leap Backwards of Journalism in China also details Beijing's strategy to control access to information within and beyond its borders before presenting appeals and recommendations to Chinese authorities, governments, institutions, journalists and media outlets".

“If China continues its frantic race backwards, Chinese citizens may lose hope to one day see press freedom established in their country, and the Beijing regime may succeed in imposing its anti-model domestically and abroad,” says the RSF Secretary General, Christophe Deloire, who calls on democracies to “identify all appropriate strategies to dissuade the Beijing regime from pursuing its repressive policies and to support all Chinese citizens who love their country and want to defend the right to information”.

The Great Leap Backwards of Journalism in China

To receive and renew their press cards, journalists will soon have to undergo a 90-hour annual training partly focusing on Xi Jinping’s “Thought”. Journalists are already required to download the Study Xi, Strengthen the Country propaganda application that can collect their personal data.

At least 127 journalists (professional and non-professional) are currently detained by the regime. The simple act of investigating a “sensitive” topic or publishing censored information can result in years of detention in unsanitary prisons, where ill-treatment can lead to death.

China’s intimidation of foreign reporters, based on surveillance and visa blackmail, forced 18 of them to leave the country in 2020. Gui Minhai, Yang Hengjun and Cheng Lei, three foreign journalists of Chinese descent, are now being detained on espionage charges.

At least ten journalists and online commentators were arrested in 2020 for the simple act of informing the public about the Covid-19 crisis in Wuhan. To this date, two of them, Zhang Zhan and Fang Bin, are still detained.

Since 2016, in the name of the "fight against terrorism", the Beijing regime has been conducting a violent campaign against the Uyghurs. Seventy-one Uyghur journalists are currently detained, comprising more than half of the journalists imprisoned in China.

The number of taboo topics keeps rising. Not only those typically deemed “sensitive” – such as Tibet, Taiwan or corruption – are subject to censorship, but also natural disasters, the #MeToo movement or even recognition of health professionals during the Covid-19 crisis.

Deliberately vague, the National Security Law, imposed last year in Hong Kong by China, has since served as a pretext for the repression of at least 12 journalists and press freedom defenders, including Apple Daily founder Jimmy Lai, all of whom risk life sentences.

Chinese state-owned audiovisual group CGTN continues to broadcast regime propaganda worldwide, despite losing its licence in the United Kingdom in 2021 after airing multiple self-confessions, including those of publisher Gui Minhai and ex-journalist Peter Humphrey.

Chinese diplomatic missions are also a source of pressure against information freedom in democracies. Infamous for his diatribes against the media, China’s ambassador in Paris, Lu Shaye, is a repeat offender who regularly insults and attacks independent journalists.

In a previous report, published in 2019 and entitled China's Pursuit of a New World Media Order, RSF demonstrated how Beijing tries to put an end to the role of journalism and instead make it a tool at the service of state propaganda.

The People's Republic of China ranks 177th out of 180 in the 2021 RSF World Press Freedom Index, only two spots above North Korea. The special administrative region of Hong Kong, once a bastion of press freedom, has slipped from 18th place, upon the index’s creation in 2002, to 80th place in 2021.

The organisation said that all other language versions of the report will be available on 24 January 2022, ten days before the opening of the Olympic Winter Games in China (Simplified Chinese, Traditional Chinese, Japanese, Korean, Russian, Arabic, Spanish, Portuguese and German).

For the full 2021 report published by RSF, please click on the link in the bracket (An unprecedented investigation by RSF: The great leap backwards for journalism in China).