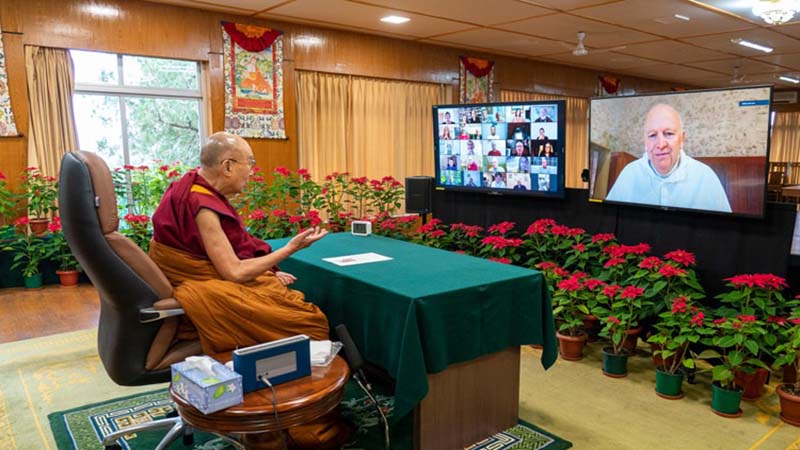 His Holiness the Dalai Lama joined Father Laurence Freeman, Founding Teacher of the World Community for Christian Meditation (WCCM), in an online dialogue on Unified Consciousness: One Mind, One Heart on December 1, 2021. Followed by a question and answer session online from his residence in Dharamshala, HP, India.

“As a refugee, I am stateless, but I am a free man living in this free, multi-religious country. I have had many opportunities to have discussions with Christians, Hindus, Jains, Muslims, Sikhs, etc. And today we have a real opportunity to promote religious harmony. You, my spiritual brother, and I have a responsibility to work for inter-religious harmony, especially between Christianity and Buddhism,” said His Holiness the Dalai Lama.

"I have often pointed out that in the last century, Mahatma Gandhi promoted the 'ahimsa' or non-violence, and many people around the world have followed his example. Today, we must make every effort to encourage another Indian tradition that is thousands of years old - 'karuna' or compassion. Christianity, like other religions, emphasizes the importance of loving-kindness. The reason you give is that we are all created by one God. We are all children of God, and since God's nature is infinite love, we should also have a warm-hearted towards others,” he added.

"So far, modern education has focused on developing the brain, the intellect, rather than the heart. If you have a warm heart, you will have peace of mind, but if you are plagued by a sense of competition and the frustration that comes with it, you will not have peace of mind," the spiritual leader of Tibet said.

"A calm mind is essential in the education process. You can not study if you are overwhelmed by anger or jealousy. So if you are going to study well, it is important that you find peace of mind. Warm-heartedness is a universal value, that is why I hope that when this pandemic subsides, I will be able to go to Delhi and talk to educators about how to incorporate and develop the idea of warm-heartedness in education in general," His Holiness said.

“As I mentioned before, in the last century, Mahatma Gandhi introduced the importance of the concept of non-violence. In this century, it would have the same power if the world at large would pay more attention, not just in churches and temples, but through education to warm-heartedness," the Nobel laureate stated.

“A warm-heartedness leads to a healthy mind. A peaceful mind enables us to sleep peacefully. I am not talking about the benefits of the afterlife or of finding God, but of being a peaceful person with a peaceful mind and a warm heart in the here and now," the spiritual leader said.

“If religious teachers could get together and discuss these things, it would be very good. Perhaps religious scholars could also discuss them in terms of education. I think our various religious traditions can contribute to a clearer understanding of this," His Holiness the Dalai Lama stated.