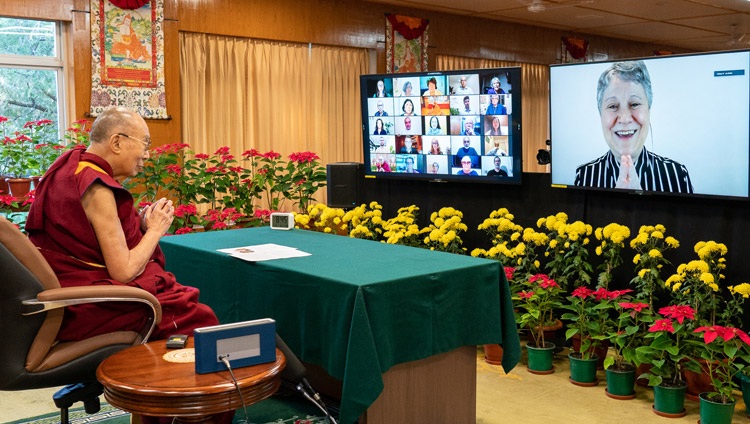 Prof Lia Diskin welcoming His Holiness the Dalai Lama to talk on Educating the Heart for the New Millennium online on November 24, 2021. Photo: Ven Tenzin Jamphel

Dharamshala, India — “We should include warm-heartedness in education, not for religious reasons, but for the sake of the health of the individual and for peaceful families, communities and world,” said His Holiness the Dalai Lama while giving a talk on Educating the Heart for the New Millennium.

His Holiness the Dalai Lama gives a speech on Educating the Heart for the New Millennium on November 24, 2021. The talk organised by the Palas Athena, a Brazilian NGO and followed by a question and answer session online from his residence in Dharamshala, HP, India.

“Our human brains may be smaller than an elephant's, but we humans have intelligence. This is something very unique about human beings. Over the past few thousand years, the world has seen a great number of teachers and thinkers, including the Buddha, who have demonstrated the wonderful intelligence of human beings,” His Holiness the Dalai Lama said.

"Sometimes people think that warm-heartedness is a religious matter, which is not the case, and even today scientists acknowledge that warm-heartedness can help find inner peace. As mammals and social animals, when we are young we are bathed in the love of our mothers, but it's not about religion. It's about our survival. Because our lives depend on the communities in which we live, we need to help each other. And to do this, intelligence alone is not enough; we also need warm-heartedness,” the spiritual leader of Tibet stated.

“There has been a lot of violence, including the first and second world wars, and people are talking that there may be a third world war, and these are caused by people's anger and self-centeredness. These conflicts happen not because we lack intelligence, but because our intelligence is not balanced with warm-heartedness, and therefore, warm-heartedness is very important,” His Holiness explained.

"Nowadays, everyone thinks that education is important. We should include warm-heartedness in education, not for religious reasons, but for the sake of the health of the individual and for peaceful families, communities and world. One of my commitments is to promote attitude of seven billion human being are same. Because that makes us brothers and sisters, there’s no point in accumulating weapons and fighting among ourselves. I believe that if you really cultivate a compassionate attitude, even if there is weapon to hand, you’ll have no wish to use it," His Holiness the Dalai Lama said.

"Education should include training in how to be calm and fearless. As scientists now recognize the importance of warm-heartedness and peace of mind to our personal and societal well-being, it is time to incorporate training to develop these qualities into the general education system,” His Holiness the Dalai Lama concluded.