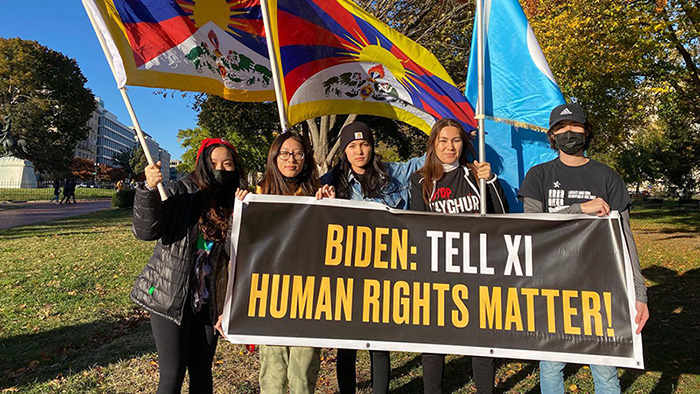 Washington, USA — Activists from Tibet, Hong Kong, and Uyghur held a vigil outside the White House, to call on President Biden to raise the human rights of Tibetans, Hong Kongers, and Uighurs at his summit with Chinese President Xi Jinping on November 15, 2021.

They also made six demands of President Biden. First, refuse any invitation from Xi Jinping to the Beijing 2022 Winter Olympics and announce a US diplomatic boycott of the games. Second, demand an end to the assault on Tibetan identity, including language, religion, culture, and nomadic way of life, and allow unrestricted access to Tibet by the international community, including the media, international observers, and Tibetans living in exile.

Third, press for the release of all political prisoners being held in violation of their basic civil and political rights and seek urgent information about the health and wellbeing of Hong Kong activists Ma Chun-Man and Tong Ying-kit, Tibetan nomad and environmental activist, A-Nya Sengdra, and Uyghur economist and scholar llham Tohti. Fourth, Urge President Xi Jinping to repeal the National Security Law in Hong Kong and release all those convicted under it.

Fifth, Call for unfettered access for American companies to factories and fields in their supply chains so that they are able to make accurate assessments of the conditions at these facilities to ensure that they are not procuring products from companies using forced labor, especially as it relates to proven cases of Uyghur forced labor in what China calls the Xinjiang Uyghur Autonomous Region (XUAR).

Sixth, Demand the release of family members of U.S. citizens and residents being unjustly held by Chinese authorities in all areas under the Chinese government's control.

"l am participating in this vigil because I want the Biden administration to acknowledge, and take action, towards eliminating the atrocious human rights issues that are still taking place under Xi Jinping. President Biden and his administration need to show the world that they care more about human rights and human lives than diplomacy. It's incredibly disheartening to see the United States ignore our cry for help," said Tenzin Kunchok, SFT Minnesota.

"As a Tibetan-in-exile, I have grown accustomed to witnessing world leaders dismiss our struggle and prioritize diplomacy above civil liberties. But in just one day, at Monday's summit with Xi Jinping, Biden and his administration have the opportunity to prove they value democratic freedoms and basic human rights. So l am here today, outside of the nation's capital to urge Biden to ensure the Tibetan struggle and other human rights violations are not brushed aside. Doing so would be a clear legitimization of China's indefensible crimes against Tibetans, Uyghurs, Hong Kongers, and many more communities," –said Tsela Zoksang, SFT New York / New Jersey.

"I am here as a change agent to bring awareness to the humanitarian crises brought about by the Chinese Communist Party under Xi Jinping. Tibetans, Hong Kongers, and Uyghurs are being silenced in their own homes, so I join this vigil in the hope that I can be a voice for them and in the hope that the Biden administration will take action on these injustices. This summit could spark the change that is desperately needed," said Tsokey Tsabtsartsang, SFT Rutgers.

"l am participating in today's action because as a Hong Konger, the pain of seeing the world turn a blind eye to China's brutal oppression against my people, and my Tibetan and Uyghur friends is so deep and personal. Enough is enough. The international community needs to stop legitimizing and endorsing Xi Jinping's crimes against humanity and do whatever it takes to hold the CCP accountable. I urge the Biden administration to lead by example and work closely with like-minded partners to defend our shared beliefs of freedom and democracy against the CCP with strong multilateral actions," said Chris Choi, Director of Hong Kong Social Action Movements in Boston.