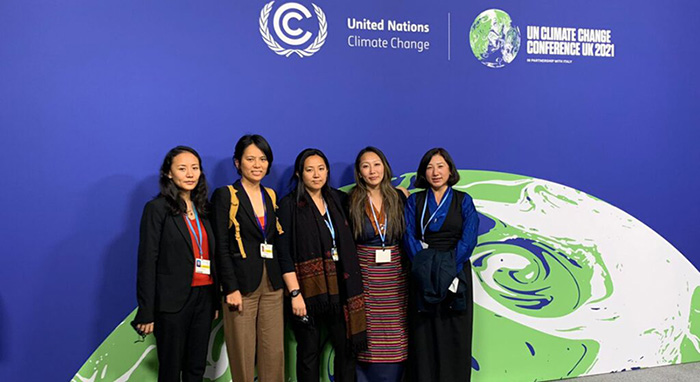 Glasgow — Tibetan environmental researchers and activists from five organizations gathered in Glasgow, Scotland, to advocate for environmental protection in Tibet and raise awareness about the climate crisis in Tibet during the COP26 conference. “The Tibet issue is not only political, but it is about Asia's water, environmental security issues, and its ecological interests,” said Dr Lobsang Yangtso, Environmental Researcher at International Tibet Network.

Five Tibetan women delegates from five organizations gathered in Glasgow, Scotland, as a team called the Tibetan Climate Crisis Team, to advocate for environmental protection in Tibet and raise awareness about the climate crisis in Tibet during the COP26 conference. The five organizations are the Environment Desk of the Tibet Policy Institute, Central Tibetan Administration(CTA), International Tibet Network, the International Campaign for Tibet, Students for a Free Tibet, Tibet Watch.

During these days in Glasgow, the team was able to discuss the importance of Tibet as a global climate issue with various delegations, including Bangladesh and South Africa, and were even able to raise Tibet with Scotland’s First Minister, Nicola Sturgeon, and former US Vice President Al Gore, Hollywood Actor and environmental campaigner Leonardo DiCaprio, and the United States Special Presidential Envoy for Climate John Kerry. They also handed the ‘5-Point Call to Action for Tibet’ leaflets to the prominent personalities and other delegates.

“The international community needs to know that China has illegally occupied Tibet since the 1950s and Tibet is experiencing environmental transformation affecting not only the Tibetans but also billions of people living downstream. Thus, the Tibet issue is not only political, but it is about Asia's water, environmental security issues, and its ecological interests,” said Dr Lobsang Yangtso, Environmental Researcher and Asia Regional Coordinator at International Tibet Network.

“Although many countries recognize the global significance of the Tibetan plateau for the world and Asia in particular, there is hardly anything done to protect Tibet's environment. Therefore, we came here every year during the COP summit to call on the UNFCCC to launch scientific research studies to better understand both the impact of climate change and the plateau's critical role in reversing the pace and of global climate change,” said Dechen Palmo, a Research Fellow at the Tibet Policy Institute, CTA.

“The world needs to know that Tibet could become a perfect storm for climate failure if we don't pay attention to what is happening in Tibet. It is a bad climate situation in a region that is extremely sensitive to global warming and industrialization. Tibet's glaciers and grasslands provide key ecosystem services to over 1.4 billion people across continental Asia. If the global temperature rise is not limited to 1.5 degrees Celsius, almost two-thirds of the glaciers in the Hindu Kush Himalayas will be gone in 80 years. However, this urgent climate situation is exacerbated by the political barriers to transparency and open dialogue. So, we need to talk about what's happening, what we know and do not know, and what we need to do to help local communities to mitigate environmental damage and build environmental resilience,” said Palmo Tenzin, Advocacy and Research Officer at the International Campaign for Tibet.

“Advocating for Tibet and its environment has been both a positive and negative experience. On the one hand, I have found that many young climate activists are eager to fight Chinese government occupation and stand with Tibetans inside Tibet. However, I have also experienced too many climate groups who are willing to throw Tibetans under the bus for the sake of collaboration with China on climate issues. Despite these disappointments, though, I am still hopeful that the global climate movement will heed the voices of Tibetans and stand with us against China's degradation of our homeland,” said Pema Doma, Campaigns Director at Students for a Free Tibet.

When asked why she was coming to COP 26, Tibet Watch Senior Fellow Tenzin Choekyi said, "it was to send a clear message to the international community about the need for urgent focus on climate justice for Tibet. To highlight systematic policies that have been implemented by the ruling Chinese government since Tibet's colonisation without fully understanding, recognising, and integrating Tibetan's indigenous knowledge. To highlight the impacts of Tibet's climate crisis on Asia's water and food security. To call for a rights-based approach towards the climate crisis".

The Tibet Climate Crisis team, Dr Lobsang Yangtso, and Tenzin Choekyi raised the Tibet climate crisis in Tibet and the importance of Tibetan glaciers to downstream Asian countries at the UNFCCC side-event- Achievements of the Facilitative Working Group of the Local Communities and Indigenous People.

On the sidelines of the COP26 climate change conference in Glasgow from October 31 to November 12, 2021, the Tibet Climate Crisis Team organized a talk on November 4, 2021, on the Tibetan Climate Crisis: Critical Lessons for Global Climate Policy. The talk aimed to draw attention to the Tibetan climate crisis, discuss Tibet's role in the global climate system, and explain why Tibet should be part of the global climate conversation.