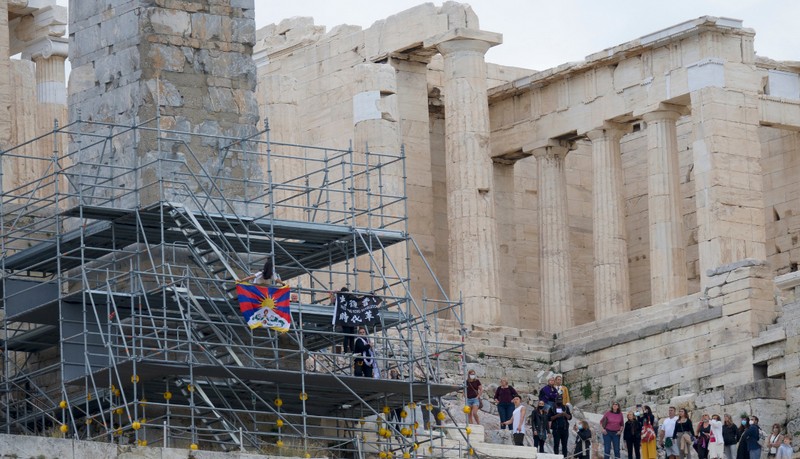 Tibetan and Hong Kong activists detained by police after staging a protest at the Acropolis in Athens, Greece, October 17, 2021. Photo: TPI

Athens — Students for a Free Tibet (SFT) has condemned the hypocrisy of the International Olympic Committee as Beijing 2022 is set to officially receive the Olympic Torch.

“Tibetan and Hongkonger activists staged a protest at the Acropolis in Athens, Greece, where in just 48 hours, the Olympic Torch will be officially handed over to the Beijing 2022 Committee,” said the organisers in a press statement released on Sunday, October 17, 2021.

"The activists are still being held by Greek police as of 10:15 am Athens time," the organisers express hope, saying "Stay tuned for more updates".

Joey Siu, an exiled 22-year-old Hong Kong activist, said: “I am a Hong Kong activist and I cannot return to my homeland. Taking this nonviolent direct action today is bittersweet as in Hong Kong, if I protested in this way, I would face unpredictable, lengthy jail time, or worse. As we shared our message today, my heart was with all my friends that are being unjustly persecuted in Hong Kong.”

“By awarding the Chinese government the honor of hosting an Olympic Games yet again, the IOC is sending the world a message that it is ok to turn a blind eye to genocide and crimes against humanity in Hong Kong, Tibet, East Turkestan, and Southern Mongolia. We must stand together to oppose Beijing 2022,” she further added.

The SFT is a global network of students and activists working in solidarity with the Tibetan people for human rights and freedom. The group says they use education, advocacy, and non-violent direct action to achieve Tibetan independence.