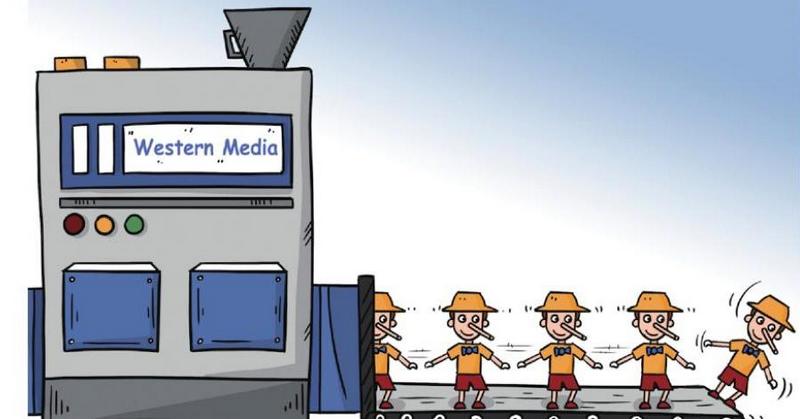 Paris — Reporters Without Borders (RSF) Secretary-General Christophe Deloire responds to the editor-in-chief of Chinese official media Global Times, who in a paranoid and incoherent editorial made thinly veiled threats to the organisation.

In an editorial published on Saturday, 2nd October, the editor-in-chief of the Chinese official media Global Times, Hu Xijin, violently attacked press freedom organisation Reporters Without Borders (RSF), in particular its project Journalism Trust Initiative (JTI), which aims to promote independent journalism and fight disinformation around the world. In an often inconsistent rant (see analysis below), Hu accuses RSF of "building an alliance of lies" to harm China and ends with a chilling warning: the "wild dog" RSF better watch out for China's "stick".

“In this paranoid and threatening text, Mr. Hu Xijin goes out of his way to attack the work of Reporters Without Borders (RSF) but does not manage to give a single factual argument in support of his theses,” says RSF Secretary-General Christophe Deloire. “Because RSF denounces its repressive legal framework and its abusive use of criminal law, the Chinese regime has become accustomed to labeling our organisation as anti-China, just as it systematically calls factual information that does not correspond to its propaganda narrative ‘fake news’”.

President Xi Jinping, in power since 2013, has restored a Maoist-era propaganda grip in China based on censorship and internet surveillance. The Beijing regime is also trying by all means to control information beyond its borders, threatening press freedom around the world.

Five accusations that do not stand up to the facts

1 - RSF hopes to "control the internet" through JTI project

Global Times: "RSF cannot control the internet". A non-governmental organisation is not in a position to "modify and reset the logic of the spread of false information on the internet".
RSF: “The Journalism Trust Initiative (JTI) aims to promote the reliability of information by encouraging respect for journalistic ethics through a media certification system entirely independent of RSF. Far from claiming to ‘control the internet’, RSF wants to motivate platforms to favor transparent sources in order to reduce the impact of disinformation in the world".

Global Times: JTI supporters are mostly “Western” organisations and Chinese and Russian media “are not involved”.

RSF: “The JTI project is open to all media in the world, provided they are able to demonstrate that their operating system allows for the basic criteria of journalistic ethics and editorial independence to be met. Some Russian media took part in the standard setting phase”.

Global Times: RSF, "one of the worst liars in the contemporary world", has started a campaign to "build an alliance of lies about China".

RSF: “This conspiratorial theme is regularly taken up by the Chinese regime's propagandists, despite the rigor of our work. In fact, RSF is an independent organisation whose mandate is to support and defend press freedom and which has a consultative status with several international organisations, including the United Nations and UNESCO. RSF is very critical of the actions of the current Chinese regime, which tries by all means to control information within and outside its borders and threatens press freedom around the world, as demonstrated by the investigative report entitled ‘China's Pursuit of a New World Media Order’ published in 2019”.

Global Times: In RSF’s World Press Freedom Index, China "is always listed at the bottom." But in practice, the Chinese public nonetheless has the freedom to "expose" and "solve" the country's problems.

RSF: “In our 2021 World Press Freedom Index, China is ranked 177th out of 180 countries and territories. This index, published since 2002, reflects the degree of freedom enjoyed by journalists based on objective criteria such as pluralism, independence of the media, quality of the legal framework and safety of journalists. In China, President Xi Jinping, in power since 2013, restored Maoist-era practices including extensive Chinese Communist Party control over professional media, a violent crackdown on non-professional journalists and unprecedented censorship on the internet. The poor position of China in our index is, unfortunately, amply justified”.

Global Times: "Like a wild dog, (RSF) will haunt the road ahead of China from time to time. Therefore, we must carry a stick in our luggage when forging ahead”.

RSF: “The Beijing regime only knows intimidation and violence to silence its critics. According to our latest tally, as many as 122 journalists and press freedom defenders are currently detained in China, in conditions that often lead to fear for their lives . RSF wonders what Mr. Hu Xijin's threats imply when he speaks of the Chinese 'stick' being inflicted on the organization if it continues to denounce the abuses of the regime”.