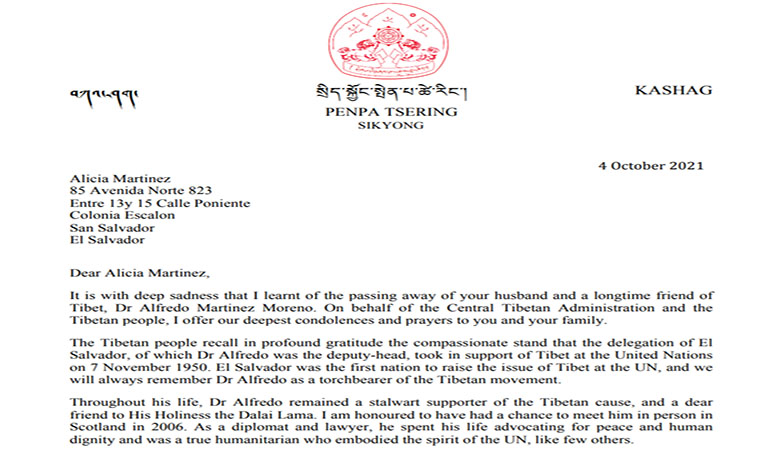 Dharamshala, India — Penpa Tsering, President of the Central Tibetan Administration offered his condolences on the demise of Dr Alfredo Martinez Moreno, a longtime friend of Tibet and said "on behalf of the Central Tibetan Administration and the Tibetan people, I offer our deepest condolences and prayers to you and your family".

Sikyong Penpa Tsering, the political leader of Tibet, wrote to Mrs Martinez on Monday, October 4,2021, to express his condolences on the death of her husband, Dr Alfredo Moreno, the former delegation of El Salvador to the United Nations. who passed away on Saturday, 2 October at the age of 98.

“It is with deep sadness that I learnt of the passing away of your husband and a longtime friend of Tibet, Dr Alfredo Martinez Moreno. On behalf of the Central Tibetan Administration and the Tibetan people, I offer our deepest condolences and prayers to you and your family," the Tibetan political leader wrote.

“The Tibetan people recall in profound gratitude the compassionate stand that the delegation of El Salvador, of which Dr Alfredo was the deputy-head, took in support of Tibet at the United Nations on 7 November 1950. El Salvador was the first nation to raise the issue of Tibet at the UN, and we will always remember Dr Alfredo as a torchbearer of the Tibetan movement,” Sikyong Penpa Tsering said.

"Throughout his life, Dr Alfredo remained a stalwart supporter of the Tibetan cause, and a dear friend to His Holiness the Dalai Lama. I am honoured to have had a chance to meet him in person in Scotland in 2006. As a diplomat and lawyer, he spent his life advocating for peace and human dignity and was a true humanitarian who embodied the spirit of the UN, like few others," he added.

“His legacy will remain an inspiration for all of us in our pursuit for freedom and dignity. Once again, I offer our sincere condolences and offer our prayers for his swift rebirth,” Sikyong concluded.