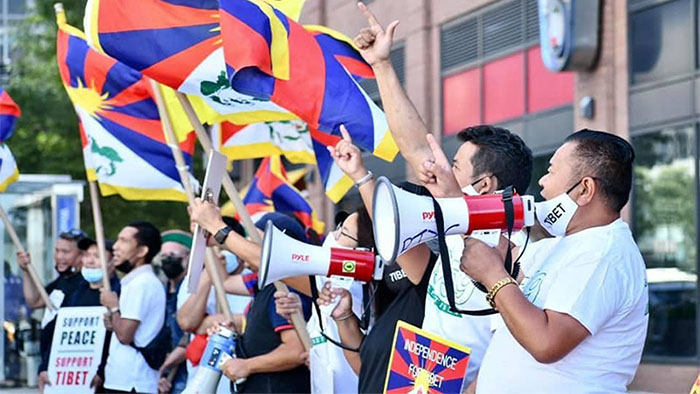 Tibetan activists protest outside the Chinese Consulate in New York on September 27, 2021. Photo:file

New York, USA — The Regional Tibetan Youth Congress (RYTC) of New York and New Jersey, USA, organized a peaceful protest outside the Chinese Consulate in New York to commemorate the peaceful uprising of the Tibetan people in Lhasa on September 27, 1987.

On September 27, 2021, first, activists from the Tibetan Regional Youth protested in front of the United Nations building in New York to raise awareness of the human rights situation in Tibet at the 76th session of the United Nations General Assembly being held in New York. Subsequently, Tibetans protested outside the Chinese Consulate in New York to commemorate the peaceful uprising of the Tibetan people in Lhasa on September 27, 1987. This day marks the 34th anniversary of the historic peaceful demonstration by 21 monks at Drepung Monastery.

The Chinese Communists invaded eastern Tibet in 1949, and on May 23, 1951, the Tibetan government was forced to accept the "Peaceful Liberation of Tibet 17-Article Agreement'’. However, China itself violated this agreement in the following years, culminating in the Tibetan national uprising of March 1959, when the Dalai Lama was forced to seek asylum in India in 1959.

On September 27, 1987, 21 monks from Drepung Monastery in Lhasa gathered in the streets, holding up the Tibetan national flag (the Snow Lion flag) and chanting slogans of “Long Live His Holiness the Dalai Lama” and “Free Tibet”. This led to nearly two years of demonstrations and protests, the arrest of thousands of Tibetans, and an unknown number of deaths.

During a peaceful protest outside the Chinese Consulate in New York on September 27, 2021, protesters chanted: “stop the killings in Tibet”, “Tibet will never be part of Tibet”, “China leaves Tibet, stop lying to the world”, “stop the genocide in Tibet”, “boycott the 2022 Beijing Olympics”.