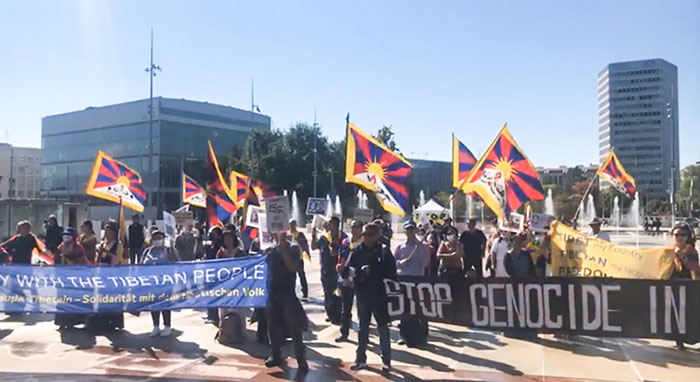 On September 24, 2021, Tibetans and Tibet supporters held a peaceful march to raise the deteriorating human rights situation in Tibet. Photo:file

Geneva, Switzerland — Tibetans in Switzerland and Liechtenstein staged a peaceful march to raise the deteriorating human rights situation in Tibet at the ongoing 48th session of the United Nations Human Rights Council.

The Tibetan Community President Karma Choekyi read an appeal letter from the Tibetan community to the UN High Commissioner for Human Rights at the event. The appeal letter asks China to respect the right of Tibetan children to learn the Tibetan language, to stop the forced militarization of Tibetan children in military camps during school holidays, release all Tibetan political prisoners, including the 11th Panchen Lama Gedun Choekyi Nyima and his entire family, and Chadrel Rinpoche, and allow an independent fact-finding delegation to assess the situation on the ground in Tibet.

Representative of the Tibet Bureau in Geneva, Chhimey Rigzen, expressed concern over the deteriorating situation in Tibet and called on Tibetans to unite against the atrocities committed by the Chinese authorities in Tibet for over six decades.  Uwe Meya, the representative of the Swiss-Tibetan Friendship Association, Tsering Youdon, the president of the Tibetan women's Association, and Tenzin Desel, the board member of Tibetan Youth Association in Europe, also spoke at the event.

All delegates expressed serious concern about the ongoing persecution of Tibetans and the destruction of Tibetan culture and identity in China. They urged the United Nations and the international community to work together to hold China accountable for its violations of all aspects of the fundamental rights of Tibetans and other groups under the Chinese Communist regime.

Tibetan Community President Karma Choekyi, accompanied by Kalden Tsomo, the UN Advocacy officer of the Tibet Bureau, met with a representative from the UN Office of High Commissioner for Human Rights and submitted the community’s appeal letter.