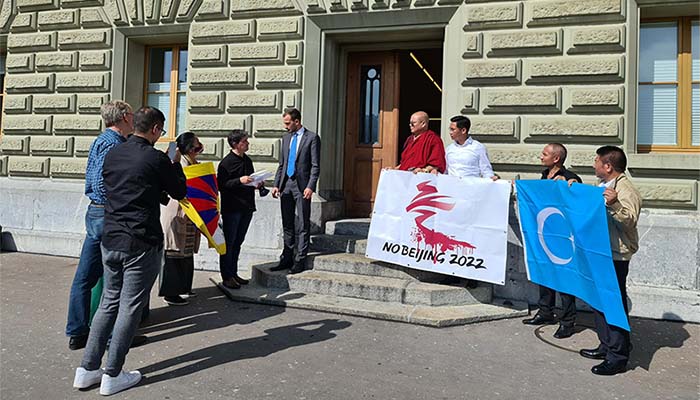 On September 22, 2021, representatives of the Tibetan Association and other associations submitted a petition to Swiss government officials. Photo:File

Bern, Switzerland — Several Tibetan associations in Switzerland submitted a petition calling on the Swiss government to boycott the 2022 Winter Olympics in Beijing and not send official Swiss representatives to the city. The petition has 7,788 signatures and is supported by Swiss parliamentarians Fabian Molina and Nicolas Walder, among others.

The petition has three demands for the Swiss government: first; commits to a diplomatic boycott of the 2022 Winter Olympics by not sending official Swiss representatives to Beijing because of the serious human rights violations in Tibet, East Turkestan, and Hong Kong.

Second; calls on Swiss Olympic to prepare a binding statement on how it will ensure that human rights for its athletes are respected before and during the 2022 Olympic Games, and raise awareness on the situation in China among its athletes.

Third; approaches the International Olympic Committee (I0C) to raise the issue of respecting human rights during the Olympic Games and urges the I0C to prepare a binding report on the measures planned before the Games.

“Our petition demands a diplomatic boycott because sending Swiss officials to the Beijing 2022 Olympics means ignoring the ongoing oppression and discrimination in Tibet, the brutal genocide in East Turkestan, and the 24/7 invasion of privacy and attacks on Hong Kong's democracy,” one of their posts said.

“We are calling on the Swiss government to take action and boycott the Winter Olympics in Beijing 2022 to ensure that Switzerland is not endorsing China’s brutal crackdown on Tibetans, Uyghurs, Hong Kongers, and Southern Mongolians,” they expressed.

“ I sign the petition because the respect of human rights is mandatory and as long as this is not the case, the Federal Council must boycott the Olympic Games," said Christine Badertscher, member of the National Council of Switzerland.

“ The Chinese government is seriously violating human rights. It is unacceptable that Switzerland offers the Chinese government an uncritical platform in the context of the Olympic Games and pretends that everything is fine. Switzerland and the International Olympic Committee have the responsibility to make China comply with international rules. That is why I sign this petition," said Fabian Molina, member of the National Council of Switzerland

“I will sign the petition because human rights are not optional. It must be a prerequisite for the organization of the Olympic Games. It is unthinkable that our countries are diplomatically represented at the Games in a state, like China, that tramples on human rights. We must boycott the Beijing 2022 Olympics," said Nicolas Walder, member of the National Council of Switzerland