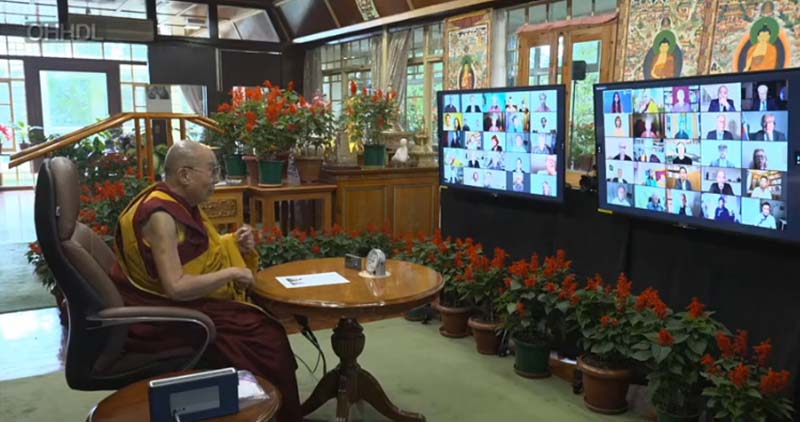 His Holiness the Dalai Lama gave a talk on Tibetan Culture and Its Potential to Contribute to Peace on August 25, 2021.

His Holiness the Dalai Lama delivered a lecture on Tibetan culture and its potential to contribute to peace online from his residence in Dharamshala, HP, India, on August 25, 2021, to people from Germany and around the world, followed by questions and answers.

Tibetan Culture and Its Potential to Contribute to Peace talk organized by Tibet Initiative Deutschland (TID), the largest Tibet Support Group in Germany.

Tenzyn Zochbauer, Executive director of Tibet Initiative Deutschland welcomed His Holiness the Dalai Lama and audiences and introduced Tibet Initiative Deutschland. She then requested His Holiness the Dalai Lama to share his views on how Tibetan Culture can make difference or contribute to a peaceful and mindful global society, especially in this current time.

His Holiness the Dalai Lama began the conversation by saying, “I am very happy to discuss with some Germany friends, since my childhood, Germany is very close to my mind, one of the reasons is that Mr Heinrich Harrer, who is very close to me, I learned my first English from him”.

“Our first King Songtse Gampo lay down our own scripture, and in the eighth century, our second King Trisong Detsen wanted to establish Buddhism in Tibet, not through China, but directly from India. At that time, the best institution of Buddhism was the Nalanda institution, so he invited top masters of the Nalanda institution to Tibet. When Shantarakshita arrived in Tibet, he noticed that we had our own script, therefore, so instead of learning Pali and Sanskrit, he said, translate all these important Buddhist texts into the Tibetan Language. There were 100 volumes, which were Buddha’s own teaching, and then about 200 volumes, which were the writings of Indian masters, and all these together, these were more than 300 volumes in our Tibetan language, this was the beginning of the development of our unique Tibetan heritage," the Tibetan spiritual leader said.

“Tibetan Buddhists not only practice compassion and warm-heartedness but also use our brains logically, so today, I think Tibetan Buddhism has great potential to contribute to a peaceful world. By practicing compassion, we can develop our inner peace. Today we try to contribute as much as we can to create world peace through inner peace, not only faith, which is a personal belief or business, but knowledge and learning are for all people, including people without faith, who also want peace of mind,” said the Nobel laureate.

“I have discussed closely with modern scientists how to develop peace of mind and how to tackle our anger, fear, and suspicion. There are now more and more scientists interested in the Buddhist approach, but I have never propagated Buddhism, simply how much we can contribute to a peaceful world through inner peace,” the Tibetan Spiritual leader said.

When one man asked him how he could give hope to people who had lost loved ones in the flood, His Holiness the Dalai Lama replied, “try to show them that you really care about their well-being”.

His Holiness the Dalai Lama also spoke about how Tibetan monasteries and schools were established in India to preserve Tibetan religion and culture, as well as global warming and the importance of Tibet's environment and rivers to the world.