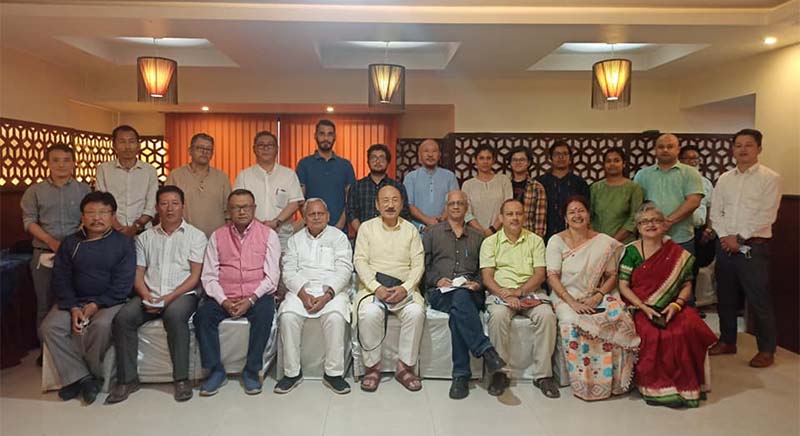 Guwahati, India — The India-Tibet Cooperation Forum, along with other pro-India-Tibet groups, decided to organize protest demonstrations to send a strong message to Beijing, claiming that India will defend its territory at any cost. Another message sent to New Delhi is intended to narrate that Sino-India relations can not progress unless the issue of Tibet is amicably resolved and His Holiness 14th Dalai Lama regains his Potala palace in a dignified manner.

On July 30, 2021, Guwahati, Assam. People from different parts of India; Assam, Arunachal Pradesh, West Bengal, Bihar and Jharkhand, gathered in Guwahati to support the future course of the Campaign for Tibetan Freedom in India. The event was attended by Sh. R K Khandu Khrimey (National Convener of the Core Group for Tibetan Cause - India), Sh. Surendra Kumar (National Co-Convener of the Eastern Region of CGTC-I), Sh. Jigmey Tsultrim (Coordinator, India Tibet Coordination Office) and several other regional conveners of CGTC-I. as well as representatives from Tibetan settlements in northeast India, and several key civil society and media representatives from Assam and Arunachal Pradesh.

Bharat Tibbat Sahyog Manch, an umbrella body of Indians supporting the Tibetan Freedom Movement (Tibet Mukti Sadhana), has decided to make the upcoming October 20 a day of protest against the communist regime in Beijing, as the People's Liberation Army attacked both Ladakh and Arunachal Pradesh (then the Northeast Frontier Agency) on this day in 1962.

The main event is planned to be held in Tawang, Arunachal Pradesh, an area often claimed by Beijing as the southern part of occupied Tibet. The event is planned under the auspices of the India-Tibet Support Group and is likely to be attended by the newly elected Sikyong Penpa Tsering, the President of the Central Tibetan Administration in Dharamsala, who is recognized as the highest political leader for the exile Tibetans across the world.

The visiting Tibetan president is also scheduled to meet with representatives of civil society groups and media personalities in Guwahati, address a press conference in Tezpur, visit Tibetan settlements in Shillong, Tezu, Miao, Tenzingang, Bomdila, Tuting, and pay homage to Goddess Kamakhya and the mighty river Brahmaputra, which originated in Tibet.

Paying tributes to all Indian soldiers who made supreme sacrifices during the Chinese aggression and also commemorating Bharat Ratna Dr Bhupen Hazarika, who created some extraordinary songs on Burha Luit (Brahmaputra) along with the people in the valley and after the 1962 war he dared to term China as an enemy nation through his immortal song, are also on the card.

“Aggressive Chinese forces showed utter disrespect to the rules framed by Panchsheel treaty, signed by China and India on 29 April 1954. We want to protest against the assault over India’s trust in the Beijing administration,” said Rinchen Khandu Khrimey, national convenor for the core group for Tibetan cause- India, while addressing selected nationalist citizens on 30 July 2021 in the city.

The former Indian parliamentarian from Arunachal Pradesh commented that Tibet is India's true neighbor (not China) and that its independence would benefit the world's largest democracy immensely. Khrimey claimed that since Tibet is at one with the truth, it will soon break the clutches of China and become a sovereign state.

He also hinted that Prime Minister Narendra Modi's recent birthday wishes to the Dalai Lama have brought new hope to millions of Tibetans. However, Khrimey expects more from the energetic Tibetan leader, so that the exile Tibetans can return to the Himalayan landscape and lead a peaceful life under a progressive democratic government after shifting from Dharamshala to Lhasa.

Speaking at the conference, Soumyadeep Datta, regional convener of the core group, said that China is waging an ecological war against India because it is exploiting the vast freshwater resources on the Tibetan plateau and also diverting large amounts of water from the Yarlung Tsangpo River, affecting civilizations in the Yarlung Tsangpo basin. A brochure documenting the Tibetan movement in Assamese was also released.