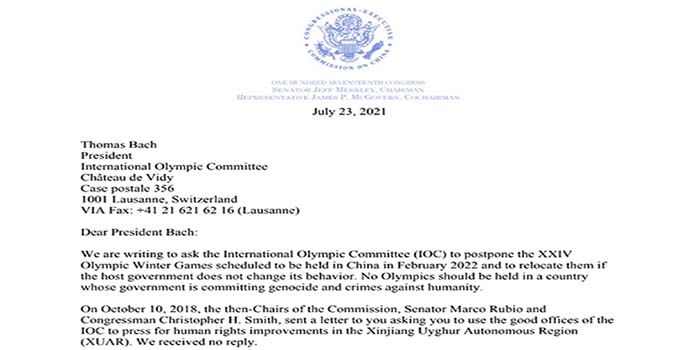 Washington, US — A group of lawmakers from a bipartisan Congressional-Executive Commission on China (CECC), wrote a letter to Thomas Bach, President of the International Olympic Committee (IOC) calling them to postpone the upcoming Beijing 2022 Winter Olympics and to relocate them unless China ends the genocide of minority groups.

"No Olympics should be held in a country whose government is committing genocide and crimes against humanity," the letter read. Earlier, in 2018, they had urged the IOC to confront the Chinese government to help end the mass internment and other abuses of Muslim ethnic minorities in the Xinjiang Uyghur Autonomous Region (XUAR). This letter was met with no response.

"Since the 2018 letter, the situation facing Uyghurs and other Muslim ethnic communities in the XUAR has deteriorated further, as documented by the Commission and numerous other governmental and non-governmental entities around the world," they wrote, referring to the IOC's failure to take action against China.

Addressing the 2019 postponement of the Tokyo Olympics, the letter pointed that a delay of the Olympics because of genocide is not impossible.

"On March 24, 2020, four months before the planned start of the 2020 Summer Olympics, you announced jointly with the Japanese government a postponement of the Tokyo Games because of the COVID-19 pandemic. This demonstrates that the IOC is capable of orchestrating a postponement of the Olympic Games on short notice. If the Olympic Games can be postponed for a year for a pandemic, they can be postponed a year for a genocide," they stressed.

The CECC is scheduled to hold another hearing on Tuesday, July 27, 2021, titled "Corporate Sponsorship of the 2022 Winter Olympics" for urging top-level Olympic corporate sponsors to exert influence on China to improve its record on human rights.