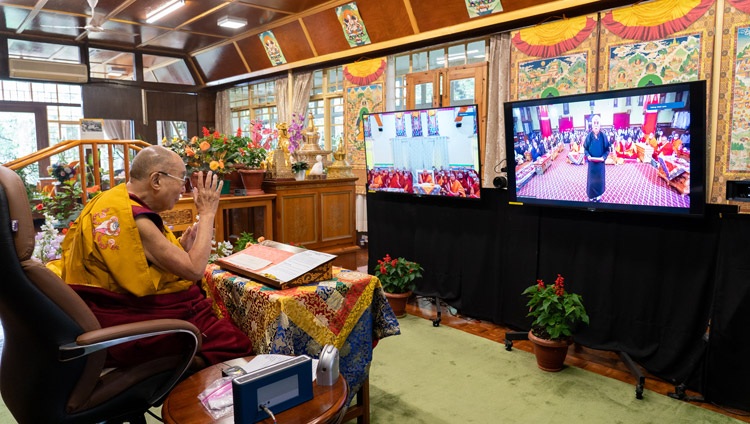 First day of His Holiness the Dalai Lama's teachings on Lamp for the Path to Enlightenment in Dharamshala, on July 13, 2021. Photo: Ven Tenzin Jamphel

Dharamshala, India — On July 13, 2021, as a part of a two-day online event, His Holiness the Dalai Lama gives his teachings based on a book written by Atisha 'Lamp for the Path to Enlightenment ' from his residence located in Dharamshala, India.

During the short one and a half hour program that began at 9:00 a.m., His Holiness the Dalai Lama delivered a teaching on "Lights on the Path to Enlightenment" at the request of the Ladakh Buddhist Association, the Ladakh Gompa Association, and Tiksey Rinpoche.

The event began with His Holiness the Dalai Lama receiving warm greetings from Thupten Tsewang, President of Ladakh Buddhist Association speaking on behalf of everyone present at the event. Since H H the Dalai Lama has not been able to visit Ladakh in a long time due to the pandemic restrictions, this event was made accessible virtually from different locations in Ladakh.

"So today, to the faithful people of Ladakh, Leh. As requested, I have agreed to give a teaching on Lamp for the Path to Enlightenment. I am very happy about that," said His Holiness the Dalai Lama at the beginning of this session.

He highlighted the importance of preserving the culture and religion of Tibet by telling a story that defined Master Atisha's purpose behind writing this text 'Lamp for the Path to Enlightenment '. "So I have received a teaching on the Lamp for the Path to Enlightenment from many Lamas, many masters," H H the Dalai Lama said before going explaining some of the details of the text.

He emphasized the significance of a mind practice where the person's conduct and viewpoint on different things are given utmost importance. In addition to this, H H the Dalai Lama explained his reasoning behind giving a Sanskrit title to the text, Indian translations, primary practices in Tibetan traditions, the spirit of enlightenment, and realization of true nature of things.

A brief explanation of the text was followed by an interactive question answer session. "I will be happy to reply or answer as many questions as you may ask. It will be like a debate. If the questions are difficult or tough, then I may have to think more so it will help me as well. So don't ask me easy questions but tough ones as well," His Holiness the Dalai Lama said, urging people to ask the questions they have in mind.

His Holiness the Dalai Lama began answering by agreeing with her. “This approach requires first of all the recognition that all beings are our mothers. Therefore, it will be difficult for those who may doubt the possibility of past and future lives," he said, stressing on one's requirement to understand the concept of past and future lives with the help of texts that deal with logic and reasoning. He suggested that an easier way of reaping the benefit to have a peaceful mind could be being more altruistic and compassionate towards others.

The third question was asked by an eighth grader Kunga Gyalmo, she wanted to gain a viewpoint on the concept 'For the benefit of all human beings, we should get enlightenment as fast as possible'.

The fourth question was asked by Tenzin Tsephel from Lamdron School, Ladakh. "Just as a bird with undeveloped wings cannot fly in the sky, why without super knowledge power, others cannot work good for others?" she asked.

"In order to be able to serve or benefit others, you need to understand their character, nature, interest and inclinations. Then when you go deeper, you see what kind of imprints they have, accordingly, you may be able to give teachings," H H the Dalai Lama replied.

"Is it possible to combine all the good views and deeds from all the world's religions such as Buddhism, Christianity, Hinduism and so forth and merge them into just one religion?", asked Pema Youdon from Institute of Buddhist Dialectics in Ladakh.

"Whether you are Buddhist, Christian, Hindu or Jew, all talk about kindness, warm heartedness. So this is the basis for all religions to be in harmony," His Holiness the Dalai Lama replied by also stating a view that philosophically there may be several different among religions or even within two branches of a religion, but the positive qualities they urge people to adopt are similar.

The whole event was live-streamed by several online platforms, such as the Dalai Lama Archive channel on YouTube, Tibet TV and the office of His Holiness the 14th Dalai Lama of Tibet. The live broadcast of this virtual event received over 3000 views on YouTube, as well as a lot of interaction in the comments section. Many viewers interacted, discussed, stated their views and expressed their appreciation as the session progressed.