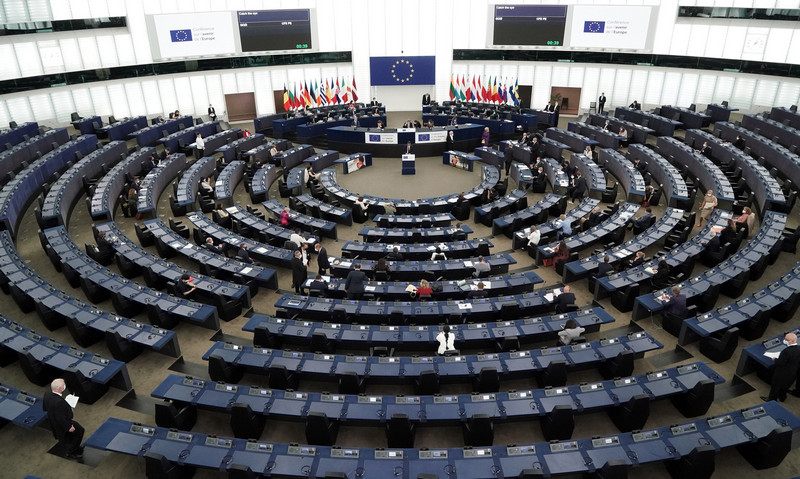 The inaugural plenary session of the Conference on the Future of Europe in June 13, 2021 in Strasbourg. Photo: EP

Brussels — The European Parliament is calling for a diplomatic boycott of the Beijing Olympics in response to China's rampant human rights violations, as well as sanctions against Hong Kong leaders, including Chief Executive Carrie Lam, for dismantling free society.

On July 8, 2021, the European Parliament (EP) adopted a resolution that calls on the European Union and its member states to decline invitations to attend the Beijing 2022 Winter Olympics unless “the Chinese Government demonstrates a verifiable improvement in the human rights situation in Hong Kong, the Xinjiang Uyghur Region, Tibet, Inner Mongolia and elsewhere in China.”

The EP has overwhelmingly passed a resolution calling on diplomatic missions to boycott the 2022 Beijing Winter Olympics in response to ongoing human rights atrocities by the Chinese government. It was passed with 578 votes in favour to 29 against, with 73 abstentions, and was supported by all of Europe’s mainstream political groups, including the centre-right European People’s party (EPP) group of the German chancellor, Angela Merkel, and the centrists of France’s Emmanuel Macron.

The resolution, which focuses on the situation in Hong Kong, also urges the EU to impose “targeted” sanctions on the city’s leaders, including Chief Executive Carrie Lam, in response to the recent closure of the newspaper Apple Daily and the “dismantling of the free society in Hong Kong.”

In June 2021, the National Security Law entered into force in Hong Kong. According to the European Parliament, the law is a clear violation of the 1984 Sino-British Joint Declaration and the 1990 Basic Law, which guarantees the autonomy and the independence of the executive, legislature and judiciary of Hong Kong, as well as basic rights and freedoms, such as freedom of speech, assembly, association and the press for 50 years after the 1997 handover of sovereignty.

During the plenary debate to adopt the resolution, members of the European Parliament recalled the importance of the EU continuing to raise the issue of human rights violations in China, in particular the case of minorities in Xinjiang and Tibet, in every political and human rights dialogue with Chinese authorities and in line with the EU’s commitment to project a strong, clear and unified voice in its approach to China.

“It’s important for us to keep looking at these serious breaches of human rights violations committed by China,” said Member of the European Parliament Maria Arena, chair of the Subcommittee on Human Rights. “Hong Kong is an example here of counter values against democracy imposed by China, but we have already talked about what’s happening to the Uyghurs, Tibet and all other violations of human rights on Chinese territory which we must absolutely follow-up on.”

The European Parliament proposed to hold a special session or urgent debate on China at the UN Human Rights Council, to launch an independent UN investigation on China and to consider appointing a UN special envoy on China.

On July 7, during the quadrennial panel discussion on promoting human rights through sport and the Olympic ideal at the ongoing 47th session of the UN Human Rights Council, Vincent Metten delivered a statement on behalf of the Helsinki Foundation for Human Rights raising concerns with regard to the 2022 Winter Olympic Games in Beijing in light of the widespread and systematic human rights violations committed by the Chinese government.

Metten asked the panel: “Can awarding the Games to an authoritarian state like the [People’s Republic of China] have a negative effect on young athletes … and run counter to the UN General Assembly’s stated expectations and the fundamental principles of Olympism?”

A number of parliamentarians worldwide—including in the US, Germany, the Czech Republic and the UK—have also called on their governments to decline invitations to the games.

The International Campaign for Tibet’s EU Policy Director Vincent Metten said: “ICT applauds the determination and the expression of strong concerns by the European Parliament about the human rights situation in Hong Kong and the decline of the fundamental rights of its population, in particular the freedom of ex-pression and opinion. In light of the widespread and systematic human rights violations committed by the Chinese government in Hong Kong, in Tibet, in Xinjiang and in the rest of the country, ICT welcomes and supports the recommendation of the European Parliament made to all EU officials not to accept any invitation to attend the Winter Olympic Games ceremonies or events.”

MEP Isabel Santos (S&D): “The closure of Apple Daily is another step towards censorship, repression and flouting of the Basic Law and international law. Tibet, Xinjiang and Macau: in all of these areas, the National Security Law is used to prosecute and repress those who don’t obey Beijing, and those who try to defend their basic rights and freedoms (…). This shutdown of broadcasters and journalists is a way of muzzling civil society; we have to be clear with Beijing and sanctions those who are involved with violations of human rights."

MEP Salima Yenbou (Greens/European Free Alliance): "I want to express to the people of Hong Kong, Xin-jiang, Tibet and Inner Mongolia our support and our solidarity. I want to say to our European people how our freedoms are precious and fragile and that we should always stay vigilant. We have to defend the freedom of opinion and press inside as well as outside the Union."

MEP Jordi Solé (Greens/European Free Alliance): "We reiterate that as long as human rights violations continue in Hong Kong, in Xinjiang, in Tibet and in Inner Mongolia and elsewhere in China and targeted sanctions against individuals, MPEs among them, and entities are in place, no further step on the Investment agreement should be taken. The Council should take good note of that."

EP is one of the three legislative bodies of the European Union and one of its seven institutions. Together with the Council of the European Union, it adopts European legislation, usually on a proposal from the European Commission. The Parliament consists of 705 members (MEPs). It represents the second largest democratic electorate in the world (after the Parliament of India) and the largest transnational democratic electorate in the world (375 million eligible voters in 2009).