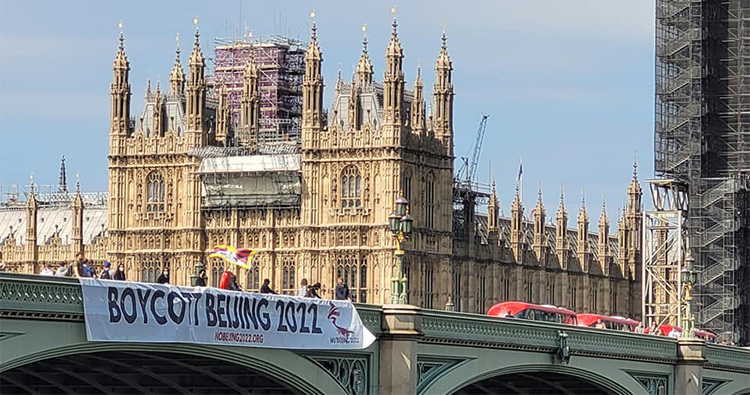 London, UK — A coalition of activist groups gathered in London to protest Beijing's hosting of the 2022 Winter Olympics and to call for a boycott of the 2022 Beijing Games and respect for human rights.

The event was organized by activists from Tibet, Taiwan, Tibet, East Turkestan, China, Hong Kong, and Southern Mongolia. protesters gathered outside Downing Street in London on June 23, 2021, to get the attention of the Prime Minister. A large banner reading "Boycott the 2022 Beijing Olympics" was untied. This was done to encourage the authorities to take a stand against Chinese atrocities and to persuade the British Olympic Association not to send a team to Beijing.

“The International Olympic Committee should never have awarded China the Winter Olympics but its actions over the years prove it has no interest in the Olympic spirit and just wants to enrich its members. So it is left to world leaders to take a stand and deny China a global stage to whitewash their abuses. Every Olympics should be a celebration of global unity and opportunity but the IOC has put athletes in an impossible position where they have to give up on their dreams or be used as propaganda. Boris Johnson must make this difficult decision for them and support a boycott,” said Sam Walton, Chief Executive of Free Tibet.

"In the UK, and around the world, we are seeing a growing movement calling for a boycott of Beijing 2022. Governments and the public are realising that where there is genocide, sport cannot be kept separate from politics. Now we must take action: if these games are not moved then they must be boycotted by every government that claims to believe in human rights. Failing to boycott would legitimise the CCP's bloody abuses and undermine recent international efforts to hold the Chinese government to account for its extensive crimes," said Basil Wong, Chief Spokesperson of Power to Hongkongers.

Pema Yoko, Chair of Tibetan Community in Britain, said: “As a Tibetan, I can not believe we are here again after what happened in 2008! Allowing Beijing to host another Games against a backdrop of horrific repression in Tibet, Hong Kong, Southern Mongolia, and a genocide in East Turkistan shows how little integrity the International Olympic Committee has left. And it now falls to the British government to say no, enough is enough and to boycott Beijing 2022. Attending the Beijing Olympics will simply embolden China. Governments, national Olympic associations, and sponsors must act now before we too lose our values and norms to China’s bullying."

"This Olympic Day is a mark of shame for the International Olympic Committee, which is insisting that the Winter Games take place in Beijing despite the fact that right now, from that very city, the Chinese government is orchestrating police crackdowns, torture, forced labour and genocide. The IOC has proven it has no morals, so now it falls to governments and national Olympic associations to do the right thing. If there is to be any justice, they must boycott Beijing 2022," said Rahima Mahmut, UK Project Coordinator of World Uyghur Congress.