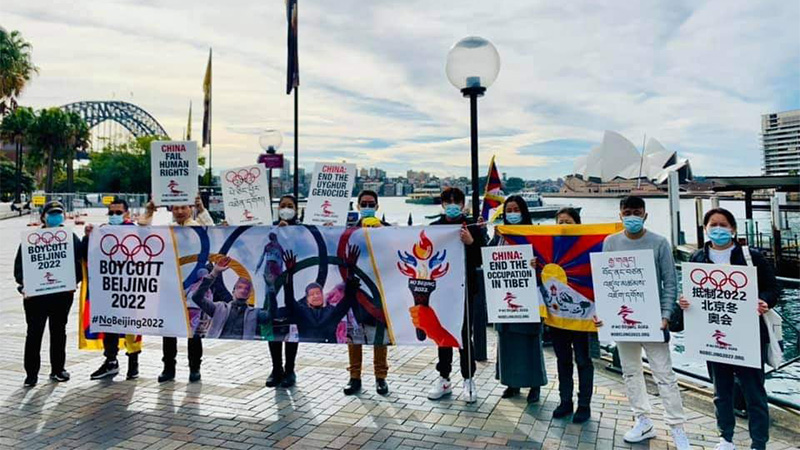 Sydney — Tibetans, Uyghurs and Hongkongers demonstrated on International Olympic Day 2021, calling for a boycott of the 2022 Winter Olympics in Beijing, to be hosted by China's authoritarian regime.

Tibetans, Uyghurs, Hong Kongers and many other human rights activists took part in the protest, demanding that the Olympics be moved to another venue where human rights and freedom of the press are respected. This is part of a mass boycott called the Global Day of Action, which is taking place in over 50 countries around the world.

'After Beijing hosted the 2008 Summer Olympics, the treatment of Tibetans in Tibet worsened, and history will repeat itself after the 2022 Winter Olympics. All these actions point to the stark genocide being committed by the Chinese government. While diplomatic and political aspects are necessary, it is believed that countries need to start maintaining a barrier and draw a line on what is acceptable', said Tibetan activist Tenzin Dolmey.

Activists are appealing to the Australian Olympic Committee (AOC) not to repeat the mistakes of the past. They argue that hosting such an important event will in one way or another glorify a country like China, which does not deserve to be glorified. According to sources, the AOC plans to leave politics aside for the sporting event and dispense with such petty reasons that victimise millions of people who have been deprived of basic human rights for decades.

The 2022 Winter Olympics will be held in China amid recent serious allegations of human rights violations and abuses across China, particularly in occupied Tibet and East Turkestan. Members of the Uighur community are deeply concerned that their people were subjected to forced labour and sterilisation, severe torture, rape in concentration camps, and various unspeakable forms of violence and abuse in the region under the former Chinese dictator of Tibet Autonomous Region Chen Quanguo.

The Tibetan activists also denounced China for its illegal occupation of Tibet for more than seven decades since 1949 and accused China of human rights violations and abuses by the communist regime in Tibet, including the severely restricted freedom of speech, religion, belief and association, arbitrary arrests, ill-treatment in detention, including torture, and forced abortions and sterilisations for the mere reason of speaking out for more freedom and their basic human rights, citing recent events such as the killing of prisoners in detention as examples.

Their demands, which seek the awareness and endorsement of world governments and leaders, non-governmental organisations, and individuals, include the following: