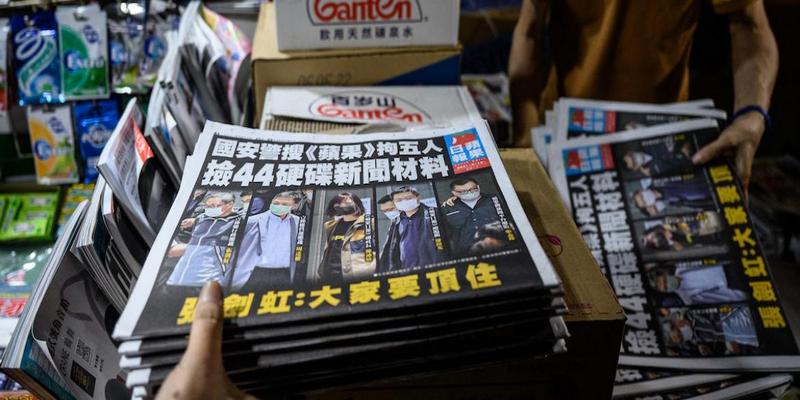 Paris based global press freedom watchdog "Reporters Without Borders" (RSF) submitted an urgent appeal to the United Nations (UN) concerning the alarming raid of the headquarters of Hong Kong media outlet, Apple Daily by the police, the arrests of five senior staff and the freezing of the media outlet’s assets last Thursday.

RSF submitted on 22nd of June 2021, an urgent appeal to Irene Khan, United Nations Special Rapporteur on the promotion and protection of freedom of opinion and expression, asking her “to take all necessary measures with the Chinese authorities and Hong Kong government to ensure that attacks against press freedom in the region stops in order for media outlets and journalists to freely exercise their activities.” The appeal follows Thursday’s raid of the headquarters of Hong Kong media outlet Apple Daily by the police, arrests of five senior staff and freezing of the media outlet’s assets.

“The international community should apply more pressure on the Chinese regime and Hong Kong government to stop these completely unjustified attacks against media outlets” , says Reporters Without Borders (RSF) East Asia bureau head, Cédric Alviani. “We must not allow Beijing to silence one of the last independent voices and beacons of press freedom in Hong Kong.”

On the 17th of June 2021, approximately 500 police officers raided the headquarters of independent Hong Kong media outlet, Apple Daily, forcing journalists to leave the newsroom, seizing their computers, phones and other devices. On the same day, five executive staff members were arrested on suspicion of “conspiracy to collude with foreign forces'', a crime that bears a life sentence under the National Security Law imposed last year by the Chinese regime. The Hong Kong government has also ordered the freezing of the company’s assets while Next Digital, its parent company, announced the suspension of trading in shares.

Apple Daily founder and 2020 RSF Press Freedom Awards laureate, Jimmy Lai, detained since December 2020, was recently sentenced to a total of 20 months in prison for taking part in three “unauthorised” pro-democracy protests in Hong Kong in 2019 and also faces six other procedures, including two charges for which he risks life imprisonment. On the 28th of May, RSF submitted another urgent appeal asking the UN to “take all measures necessary’ to obtain Jimmy Lai’s immediate release.

David Thomas, editor of the Tibet Post, said: " For decades Tibetans have warned the world that Hong Kong was close to their fate, that democracy on the island was in danger and that dreams of reform had no future, but after a long period of ignorance and silence, their predictions are now becoming more realistic as the world sees the reality of a totalitarian system. As more and more repressive measures are used to suppress Hong Kong's democratic values and principles, the tragic history of Tibet may be a vision of what is now already happening on the island, and the international community struggles to speak out in the midst of one of the darkest times, and can only watch the totalitarian nature and atrocities deliberately and carefully orchestrated by the Chinese Communist regime".