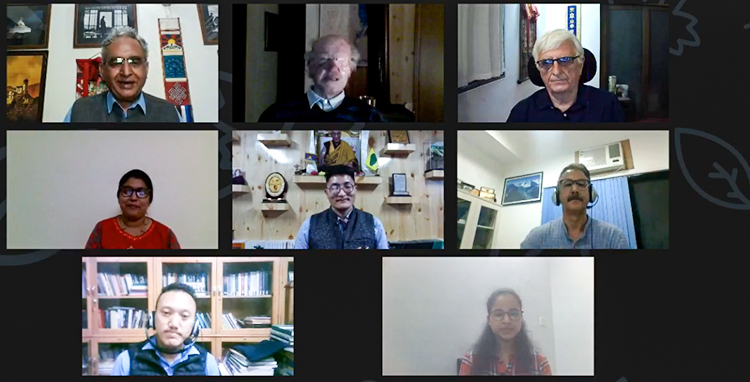 New Delhi, India — "World must wake up to China's climatic disaster in Tibet before it is too late," experts warn on world environment day, while holding an international webinar on "Environmental destruction in Tibet by China and implications for Asia" on June 5, 2021.

Insatiable greed of China for resources and its desperation to exploit these resources from a delicately placed Tibet to feed its mammoth industry and trade has damaged Tibet’s environment tremendously. So much so that loss of environmental equilibrium in Tibet has become a serious and potential threat to almost entire Asia and the world.

China’s tinkering with Tibetan rivers by building massive dams to extract electricity and water for its deficient mainland is capable of causing earthquakes and sinking of mountains which can lead to catastrophes that no Chinese technology or political machinery would be able to handle. This is one of the common messages which emerged in an international webinar focused on “Environmental Destruction in Tibet by China and its Implications for Asia” on World Environment Day.

Some other major common observations of the experts were that since Tibet covers as huge a region on the top of the world as all countries of Western Europe put together, the world cannot afford to ignore or keep helplessly watching how China is feverishly exploiting Tibet’s natural resources. China’s arrogant style of damming Tibetan rivers and exploiting freshwater, minerals, timber, and electricity from Tibet needs to be checked before it is too late. Especially damming and diversion of Tibetan rivers which have been directly feeding more than 2 billion people in 10 other countries of Asia for centuries, is incompatible with sustaining the life and livelihood of these people and countries.

This international webinar was jointly organized by the Centre for Himalayan Asia Studies and Engagement (CHASE) and Tibetan Youth Congress (TYC) to draw international attention to the dangers building up in Tibet for Asian countries due to indiscriminate exploitation of natural resources in Tibet by China. The experts who discussed various aspects of the issue were Mr Gabriel Lafitte, a leading and veteran Australian environmentalist who has been studying Tibet and its environment for over 40 years; Mr Claude Arpi, a renowned Tibetologist, historian and a keen observer of China’s water plans in Tibet; Prof. Milap Chand Sharma, a glaciologist at JNU who has studied Tibet from a Glacial Geomorphologist’s angle; Mr Tempa Gyaltsen Zamlha, Head of Environment Desk at Tibet Policy Institute of Dharamshala; Mr Sonam Tsering, General Secretary of TYC and a leading activist on issues related to Tibetan environment; and Mr Vijay Kranti, a veteran Tibetologist and Chairman of CHASE who moderated the discussion.

Presenting his analysis of how China is handling Tibet’s natural resources for fulfilling its own industrial and business needs Gabriel Lafitte said that it is very difficult to reconcile with two completely incompatible approaches of China on the environment. One is the destruction of the environment which is being done by China inside occupied Tibet. The other is that Chinese leaders are taking every opportunity to portray themselves as ‘deeply committed ’ not only to doing the right things for bio-diversity and climate but also being the ‘world leader’ in protecting the environment.

Lafitte said that there is a major change in China’s approach towards Tibet over the past 70 years. In the initial period after the occupation of Tibet, China has been presenting Tibet as an ‘underdeveloped’ and ‘poor’ region which was a ‘liability’ for China. In its public utterances on Tibet, it used to term Tibet as a liability, danger, and threat to its safety and stability. In terms of environment and assets, they used to call Tibet a ‘wasteland’ that was ‘good for nothing’.

But over the years China is treating Tibet as an asset and as a source for extraction of precious minerals, mass tourism, and exploitation of water and generation of hydro, solar, and wind electricity which is being used to run industry in far distant China. This way Tibet has changed from a cost centre to a profit centre for China. At this rate, the “third pole of the world” Tibet would end up becoming a moonscape, he feared.

Claude Arpi discussed China’s policy of taming and exploiting Tibetan rivers to meet its ever-expanding needs of power and water. To make his point he discussed in detail the case of the Tibetan river Yarlung-Tsangpo which is known as the Brahmaputra after it enters India in Arunachal Pradesh. He said that China has always taken pride in what it is doing with Tibetan rivers and never intended to hide what it does in Tibet as its “own land”. After building many dams on the Yarlung Tsangpo, China is now focusing on its new Giga project at the U-Band of the river over the ‘Grand Canyon’ in the Medok area which is only about 30 km from the Indian border. It is going to produce three times more electricity than China’s and the world’s biggest “Three Gorges Dam”.

“The magnitude of the engineering work in this remotest area of Tibet is so huge that it will need China to bring in tens of thousands of JCBs and other heavy machinery along with tens of thousands of workers from China. “This is bound to change the demographic and ecological character of this area which is not only a serious threat for the local Tibetan populations but also a big security threat for India,” says Arpi. Narrating that China’s original plan was to use controlled nuclear explosions in this area to divert the flow of the Tsangpo river from India towards China’s own areas. “There are chances that the current hydro-project may not prove feasible due to its huge size and geographic complications. In that case, there are big chances that China can undertake the river diversion project. This will be a catastrophic act on the part of China,” he said.

Prof. Milap Sharma presented a detailed analysis of the complex tectonic nature of the Himalayas, especially in the Tibetan plateau, and also of the climatic changes which are affecting the glaciers and permafrost regions of Tibet. He said that this region, especially along the southern Himalayan ranges along with India, is highly earth quake prone due to its tectonic nature. “Any tinkering with the rivers of Tibet and building of massive dams can prove catastrophic in the event of an earthquake. Even the building of big dams itself can lead to cave in and trigger earthquakes. It will be worse than a nuclear disaster,” he warned.

Presenting his personal experience of study travels through the permafrost regions of Tibet Prof. Sharma said that the climate of this region is changing fast and increase of carbon over the Tibetan glaciers due to Chinese industrial activity the glaciers are melting ten times faster. Hence they are receding fast. Also, the construction of railway in this region has worsened the situation. China’s policy of banning grazing and permanently settling the nomads away from the grasslands is only accelerating this deterioration process. He said that the earlier theory about the Himalayas working as a wall to stop the monsoon clouds of India is proving only partially correct. Actually, the glaciers and Snow Mountains of the high Tibetan plateau contribute in a big way in creating winds and pressure zone above the skies which affect the monsoons also.

Tempa Gyaltsen Zamlha has been working with many international environmental forums to convince UN-related organizations and the government to put pressure on China to stop damaging Tibetan ecology and take disaster mitigation and management seriously in Tibet. Due to the worsening environment over the Tibetan plateau events of landslides, avalanches, mudslides, and mountain collapse have become frequent. Prior to China occupying Tibet and undertaking big projects of mining, road construction, and damming of rivers Tibetans rarely witnessed such destruction. But there have been many instances when entire Tibetan villages were buried under snow or mud.

Tempa gave an example of a big landslide into the Dri-Chu (Yellow River) in Eastern Tibet when about 23 million cubic meters mass of mountain crashed and blocked the river in October 2018. It stayed for 11 days resulting in the water accumulating up to 70 km from the site. But Chinese equipment and teams could reach there only on the 5th day. Another similar event occurred after 23 days again. It shows that China is capable of building 15 thousand dams over the Yellow River but is not capable of handling such catastrophes.

Sonam Tsering himself belonged to a Tibetan nomad family before escaping out of Tibet. He spoke about how China is forcing the nomads to live in specially designated congested and cemented housing colonies. He expressed serious concern that after removing the nomads from their grasslands China is grabbing their lands for establishing industries and making money through what it claims as ‘natural tourism’. “This forcible act of relocating the nomads and depriving them of their traditional livelihood and lifestyle is bound to destroy Tibet’s cultural and social identity forever,” he warned.

Vijay Kranti, a veteran Tibetologist said that the destruction of the environment in Tibet has become a new reason for keeping up the Tibetan freedom movement alive inside Tibet. Based on his extensive travels inside Chinese controlled Tibet he said that China’s massive security and surveillance apparatus, backed by the internet and artificial intelligence has drastically reduced chances of armed resistance or organized political activity by ordinary Tibetans. “Public expression of anger against Chinese administrators on issues related to land grabbing by the government, poisoning of local water bodies and forcible eviction of nomads from their grasslands have become a common form of collective social action. This has given a new lease of life to the Tibetan freedom movement inside Tibet,” he said.

Winding up the discussion with her vote of thanks and observations Prof. Aayushi Ketkar said that the problem of ecological degradation in Tibet has ceased to a problem of Tibetan people alone. “It has acquired serious social, political and strategic dimension for entire Asia, especially for India. The world community must take note of it and join hands to meet this Chinese challenge before it is too late”, she warned.