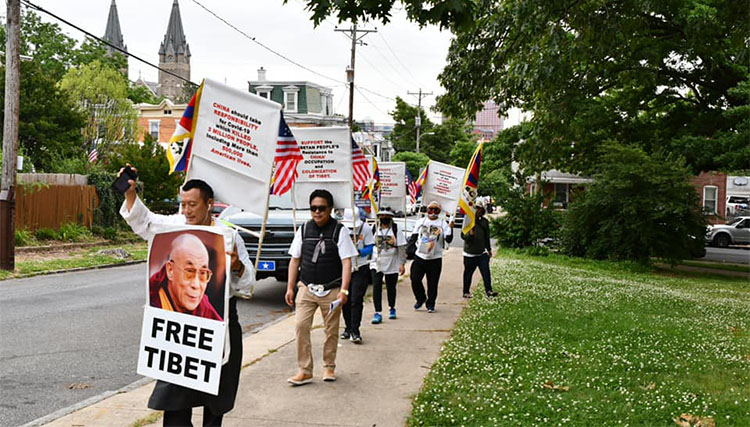 A group of six Tibetan Americans from the United States began their march for Tibet's independence. Photo: Dhondup Lhadar's FB

Dharamshala, India — A group of Tibetans in the United States have concluded their ten-day march, calling on China's communist authoritarian government to stop torture in Tibet and urging a worldwide boycott of the 2022 Winter Olympics in China and Made in China.

On May 23, 2021, six Tibetan-Americans living in the United States began their Tibetan independence rally in front of Independence Hall in Philadelphia and ended their march on the steps of the US Capitol in Washington DC on June 1, 2021.

On the first day of their rally, Tibetan independence activist Dhondup Lhadhar gave an introductory speech in which he said." We are gathered here as people who lost our country 70 years ago when China occupied Tibet at gunpoint on 23 May 1951 in the name of the 17-point agreement between Tibet and China. We came here to protest China's illegal occupation of Tibet, marching from Philadelphia to the US House of Representatives in Washington DC."

They marched through the streets while handing out leaflets to the public that read "China is responsible for the Covid-19 incident that killed over three million people, including over 500,000 Americans," " Boycott the 2022 Winter Olympics in Beijing and boycott Chinese products made from forced prisoners," We oppose China's illegal occupation of Tibet and support the restoration of Tibetan independence," " Oppose the 70th anniversary of China's so-called peaceful liberation of Tibet," " Support the Tibetan people's resistance to China's occupation and colonisation of Tibet," " We condemn Chinese infiltration and cyber attacks," " Oppose the 100th anniversary of the founding of the Chinese Communist Party."

Aims and Objectives of the Tibetan Freedom March are as follows:

Even when we have become old-aged and on the verge of dying, our resolve to restore freedom in our homeland continues to remain strong. The reason we have initiated this campaign is to express our gratitude to our great ancestral kings and warriors who established the nation of Tibet; we are doing this through our continued efforts to restore freedom in our homeland and seeking support towards this end from the international community, including the US and its citizens.

1. The Chinese government should take responsibility for the death of more than 2,385505 people caused by the Covid-19. The international community must press China on this

4. Immediately release all Tibetan political prisoners, including the Panchen Lama

5. US congress and senate must hold hearing sessions on Tibetan struggle, including Tibetan uprisings and self-immolations so that the American government can support the Tibetan struggle

6. China has invaded and colonized once-free nations such as Tibet, East Turkestan, Southern Mongolia, and Manchuria; it has also threatened the freedom and security of other world nations through spying and stealing of intellectual property rights. Through this march we want the international community to be vigilant against these threats.