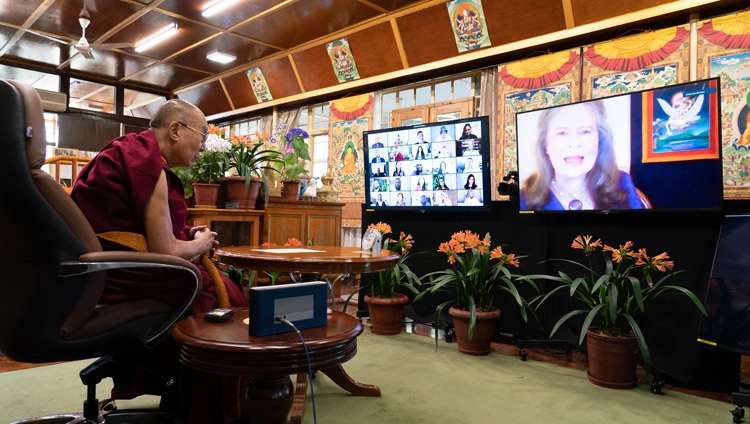 His Holiness the Dalai Lama talks with Sofia Stril-Rever from his residence in Dharamsala on April 12, 2021. Photo: Ven Tenzin Jamphel

Dharamshala, India — “Sometimes I speculate that if we had more women leaders, the world would be a safer place. Look at Finland and New Zealand and the achievements of their women leaders”, stated His Holiness the Dalai Lama while speaking on Be the Love for One Better World on April 12, 2021.

His Holiness the Dalai Lama interacted with 12 young influencers and change-makers with different conflict-ridden backgrounds, these individuals got the chance to interact with His Holiness through online video communication from his residence in Dharamshala, Himachal Pradesh, India on April 12, 201.

Sofia Shrif Rever , a Sanskrit Scholar, and Writer from Paris, France, founder of Be the Love organization introduced the event by highlighting the importance of altruistic love and what it means to inherit universal responsibility in today's generation which is facing so many challenges across the globe. Sofia posed a question to His Holiness about the concept of Universal Responsibility, “ How in this 21st Century, altruistic love is a realistic way to heal our divisions and move towards global peace, justice, responsibility, and happiness”?

His Holiness the Dalai Lama answered by saying, “In my lifetime, I’ve seen a great deal of bloodshed in a variety of wars. The result of such violence has just been suffering and more hatred. This is one of the reasons why I admire the European Union. Historically several of the nations that are among its members, especially the French and Germans, have regularly fought with each other down the centuries. However, after the end of the Second World War, they realized that constantly viewing your neighbor as your enemy serves no good purpose. Today, we have to think about the whole of humanity. It’s no longer enough just to think of your own nation or continent. The whole world has to be included. We need to acknowledge that we are all part of a global economy and we are all threatened by global warming”.

“I am committed to promoting broader awareness of the oneness of humanity. When I was still in Tibet, I admit that I only really thought about my fellow Tibetans. But after coming into exile in India, I’ve met people from many different places and made friends with them. I’ve realized that we are all the same in being human”, the Tibetan spiritual leader stated.

Ian Spiers, Founder of One Better World Collective brought together a forum where powerful and purposeful collaborations amongst global change-makers through a relational heart-to-heart approach is made possible in their efforts for the eradication of poverty and hunger. The young influencers were further divided into 3 groups for the question-answer session.

Clover Hogan. 21-year-old Climate Activist, who is the founder of Force of Nature, the activist asked, " You have spoken about Universal Responsibility and its promotion, we would love to know when did you decide to make yourself personally responsible? and How did you realise your own power to create this change"?

His Holiness the Dalai Lama addressed the question by stating on arrival in India, seeing the peace and harmony prevalent among the diversities of religions and culture, became a turning point in taking forward the concept of humanity and making one personally responsible.

Susan Rockefeller, Conservationist, and Editor in Chief of The Musings posed an important question to His Holiness, stating " How can your teachings help Women and Men to care for themselves and the Earth"?

“My main interest is to encourage people to cultivate warm-heartedness. As soon as we are born, our mothers take care of us. They feed us milk. Women are, by and large, more sensitive to others’ feelings. By nature, they seem more compassionate. Therefore, we need women to be more active. Sometimes I speculate that if we had more women leaders, the world would be a safer place. Look at Finland and New Zealand and the achievements of their women leaders”, the Nobel laureate answered.

Buffy Sainte-Marie, an Oscar-winning Composer who is also an Indigenous Singer-Songwriter from United States-Canada has been actively involved in the promotion of common humanity and was also a part of this talk today, Buffy asked His Holiness " How can we compassionately confront Misogyny"?

His Holiness had a two-front answer, on one front he was urging the larger population of women to take an active role in the leadership and political climate, but on the other hand, His Holiness wanted us to let go of the old thinking and stereotypes, and embed the principles of equality and feminism in our textbooks and education.