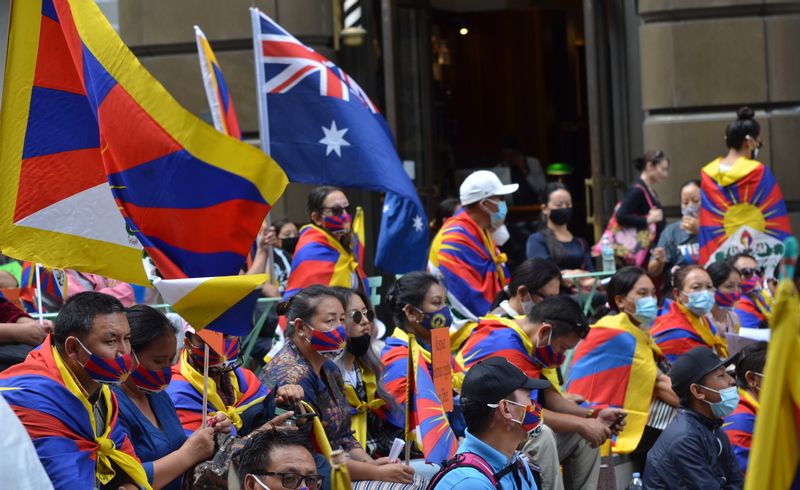 Tibetan Uprising Day observed on March 10, 2021, at Martin Place in Sydney, commemorating the 1959 Tibetan uprising against the presence of the People's Republic of China in Tibet. Photo: TPI

Sydney — Tibetans and Tibet supporters around the world turned out on March 10th to commemorate the anniversary of the 1959 Tibetan Uprising. Calls were made for an end to the illegal occupation of Tibet and for human rights for Tibetans in cities as far apart as Canberra, London, New York, Paris, Berlin, Tokyo, Taipei, and Dharamshala.

In Sydney, Tibetans and supporters gathered at Martin Place to march and demonstrate on Wednesday, March 10, 2021. The events kicked off with a rally in Sydney's Martin Place, which included guests' speeches and singing the national anthem of Tibet. Some protesters had their faces painted with the colors of their national flag which is banned in Tibet by the Chinese communist regime.

In a Facebook post, Kerry Wright, a Tibetan rights activist from Sydney, Australia, who was one of the guest speakers at the event in the town, said "It was an honour to be with part of the Tibetan diaspora today, at Martin Place in Sydney, to protest the continued brutal occupation by the CCP in Tibet. March 10, Uprising Day, is the 62nd anniversary of the uprising in Lhasa which protected and allowed the young Dalai Lama to flee into India. With us were Amnesty, Uyghurs, HK students, Rev Bill Crews, and Australia Tibet Council. It was a deeply moving experience."

"Today is the day we commemorate the martyrs who gave their lives in 1959 to fight against the Chinese Communist invasion. 62 years have passed and the spirit of Tibetan resistance remains the same, while the repression of the Chinese Communist Party remained unchanged and has even become more brutal," said Ven Bagdro, a  former political prisoner and Tibetan political activist.

"We, therefore, call on the international community to clearly recognise the fact that Tibet is a legitimate country but is illegally occupied by the Chinese Communist Party. We urge world leaders to show solidarity to save Tibet in time from its ongoing misery. We also call on world leaders to invite His Holiness the Dalai Lama to the United Nations to address the deteriorating situation in Tibet and to pressure the Chinese Communist Party to resolve the crisis in Tibet," the former political prisoner added.

"Today is a memorial for the 62 years of resistance to the Chinese occupation of Tibet. In past years, Tibetans have had huge rallies in Tibet today that have been brutally cracked down by the Chinese forces. Today there's been a community in Australia, and other people have come out to remember those times. Therefore, we're still resisting the Chinese occupation in Tibet," said Zoe Bedford, Executive officer, Australia Tibet Council.

"We work on campaigns that are both based here in Australia and internationally, for example, the IOC. China should never have been given the Winter Olympic Games for 2022. China is not a suitable host for these games. These games are supposed to be about peace. China's human rights violations in Tibet, Eastern Turkistan, and Hong Kong have shown that they're not a suitable host, never been given that opportunity," she said.

"We also campaign to the Australian government that Australia needs to take a strong stand when it's dealing with its Chinese counterpart. Australia needs to raise the issue of Tibet and it needs to make some demands for people to have greater freedom, the total lockdown still imposed in Tibet at the moment and it's hard to get in there, people can't get out of there and they can't even escape as refugees," she added.

'There's a brutal occupation going on now in Tibet. People need to be able to go there to visit their families to witness with their own eyes what's going on in Tibet now. We are expressing our solidarity with the people of Tibet. The fact that Tibetans are still resisting Chinese occupation now and the issue needs to be resolved, that's what we're hoping for,' she further stressed.

"The Gu-Chu-Sum Movement uses today's historic anniversary to put forward three demands to the Chinese government, calling for the unconditional release of Tibetan political prisoners; the granting of human rights, freedom of expression and religious faith in Tibet; and the immediate commencement of peace talks with the representatives of His Holiness the Dalai Lama to resolve the Tibetan issue, " said Dhondup, a former political prisoner, presenting Australia chapter of the Gu-Chu-Sum, political prisoners movement of Tibet.

Similar demonstrations were held in Melbourne and Canberra, where Tibetan communities engaged in a variety of activities to raise awareness about the deteriorating situation in Tibet.

Protesters have vigorously condemned the ongoing political violence and human rights violations and abuses committed in Tibet in almost seven decades, as well as the continued impunity enjoyed by the Chinese communist perpetrators, and urging the international community to address these violations as a matter of urgency, including by conducting impar­tial and independent investigations with a view to bringing those responsible to justice.

Few facts about Tibet you won't believe you didn't know

Between 1949 and 1976, 1.2 Million Tibetans have died as a direct result of the Communist Chinese illegal occupation of Tibet. More than 100,000 Tibetans have been forced to flee their homeland from 1959 and now live in Exile communities around the world. Until today, rule of law or basic human rights were non-existent in Tibet. Surveillance, repression, and arbitrary arrests are daily routines. Despite the continued suppression, the Tibetan people choose the path of nonviolent resistance and for that, they deserve the utmost respect and full support.

Over the past 70 decades, there has been ongoing political repression, social discrimination, economic marginalisation, environmental destruction, and cultural assimilation, particularly due to Chinese migration to Tibet which is fuelling intense resentment among the people of occupied Tibet.