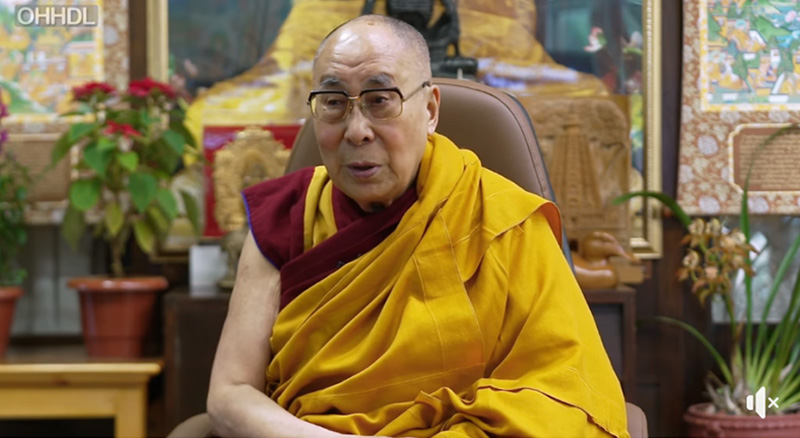 His Holiness the Dalai Lama sharing a special message to the Tibet House US, on February 17, 2021.

Dharamshala, India – “Tibetan culture has not only been preserved among Tibetans, but also has been shown to the outside world", stated His Holiness the Dalai Lama while he is sharing a special message to the Tibetan New Year Benefit concerts organized by the Tibet House US, on February 17, 2021.

Tibet House US was founded at the request of His Holiness. The cultural centre was inaugurated in 1987. It was at the inauguration where he stated his wish for a long-term cultural institution to ensure the survival of Tibetan civilization and culture. The Tibet House has annually organized their Benefit concerts to celebrate the Tibetan New Year, Losar.

The Tibetan spiritual leader firstly talked about the need to teach Tibet’s culture and tradition to the outside world. “When we became refugees and came to India as refugees, in one way it was sad, but in another way, it was a new opportunity to show the outside world Tibetan culture and Tibetan tradition,” he stated. In the message, His Holiness also talks about the co-founder of Tibet House US, Bob Thurman, who was also the first westerner Tibetan Buddhist monk.

“A number of foreigners, Americans, were really attracted to Tibetan Culture and Tibetan tradition – including Bob Thurman. So, in the early period of Dharamshala, you were already here and showing a genuine interest in Tibetan Buddhism and Tibetan Culture. At that time, you dressed like a monk, but eventually you created Tibet House in New York,” the religious leader said.

He then went on to explain how the Tibet House has helped progress Tibetan culture over the years. “Tibetan culture has not only been preserved among Tibetans, but also has been shown to the outside world. Organizations like Tibet house have been very useful and very helpful in making clear what Tibetan culture is, what the Tibetan way of life is, and what Tibetan Buddhist Tradition. The Nalanda tradition makes extensive use of investigation on the basis of reasoning, i.e. taking a logical approach.”

“Previously, Tibetan Buddhism was described as Lamaism. Now, more and more people recognize that the Tibetan Buddhist tradition is the true Nalanda tradition, the one that uses reasoning extensively and takes a logical approach. Therefore, a number of scientists are also now showing interest. In such circumstances, Tibet House in New York has been very useful. Bob Thurman, you and your wife, have worked in a very meaningful way,” the nobel laureate stated. His Holiness came to end the message by expressing gratitude and thanking the people for their work, and the collective work of the Tibet House.

“I want to thank Bob Thurman, and then those people who have helped him. Eventually you will be seen as having informed the west of something new. Therefore, I really appreciate Bob Thurman, my long-time friend, as well as the late Sogpo Wangyal, the late Geshe Wangyal, who lived in a small temple in New Jersey. He created some interest among young Americans in Tibetan culture and these things. I very much appreciate all of your work. I want to express this to all of you with Tashi Delek. Thank You,” His Holiness the Dalai Lama concluded.