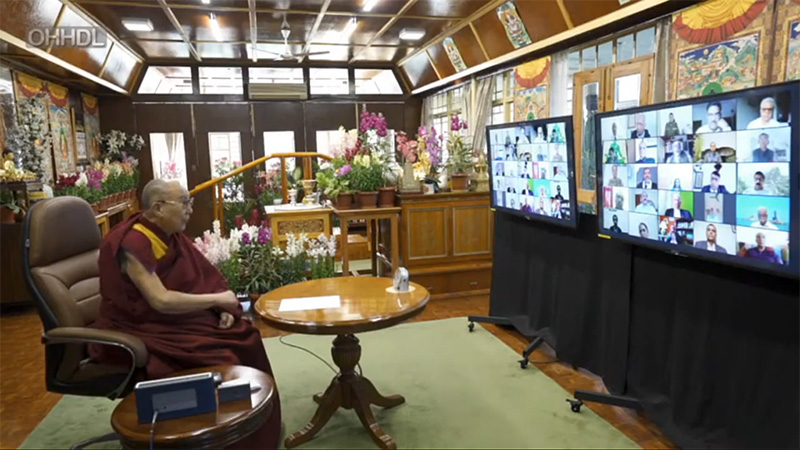 His Holiness the 14th Dalai Lama at a virtual conference with the Indian Police Foundation on February 17, 2021.

Dharamshala, India — “Any action, whether positive or negative, entirely depends on motivation and goal”, said His Holiness the Dalai Lama in a live talk requested by the Indian Police Foundation(IPF), from his residence in Dharamshala, Himachal Pradesh on February 17,2021.

The virtual session titled Empathy and Compassion in policing was an online talk given by His Holiness the Dalai Lama, followed by a question and answer session. It was moderated by M Ramachandran, President of IPF and the questions were asked by Tajinder Sing Luthra, IGP Chandigarh, Rakesh Astana, DGBSF, Aseem Arun, Additional DGP Uttar Pradesh and IPF Members Captain Raghu Raman, Satwant Atwal Trivedi, Rajsesh Shah, Sanjay Ajarika, ML Kumawat, and Prof Arvind Verma. Prakash Singh, IPF Chairman welcomed everyone to the live talk and expressed his privilege following which he talked about the important events in the life of His Holiness the 14th Dalai Lama.

“There’s a general impression that police are normally and are expected to be rude in their behavior towards the ordinary citizens and harsh in their treatment of criminals. These are aberrations in our working which we have inherited from the British Raj. The Police Act of 1861 continues to be in force to this day and that affects our working and our ethos. The police should reflect the democratic aspirations of the people, it should be friendly, humane, compassionate, fair and just in its treatment of the ordinary citizens” said IPF Chairman while talking about the topic of discussion for the day.

“We can reject everything else- religion, ideology and all the received wisdom but we cannot escape the necessity of love and compassion. This is my true religion. This is my true faith”, he ended the welcome speech with a quote by the Dalai Lama following which the Dalai Lama addressed the audience virtually. “I have spent 9 years with Chinese police and over 60 years with Indian police. I noticed both Indian and Chinese police doing the job of protecting me. However, there are some differences. Chinese communist police seem to have two responsibilities- one to protect me and the other is to watch me. The Indian police, on the other hand is very sincere” said the Nobel Prize laureate.

“India is the second most populated country in the world and its citizens are free. Democracy prevails in India and the Indian police is the protector of its democracy and Ahimsa. It is protecting a country with the ideologies that the world needs”, he added while expressing his appreciation for the Indian police. He also talked about the need to preserve ancient tradition and teachings and its importance in the modern world. “Protect not only the borders, but also the thousand year old traditions of India. The world needs the Indian tradition and teachings like Ahimsa. The British introduced modern education and modern technology including science which is useful but in the meantime Indians should also preserve their thousand year old traditions”, he said and called for Indians to secure the ancient teaching of peace, harmony and non-violence.

His Holiness declared that he regards everyone as a human being wherever he goes and whoever he meets irrespective of the small differences. “The seven billion human beings are all equal and same. Different nation, different race, different culture, different language, different religion is secondary, we are all same human being and we have to live together on this planet”, he said.

While answering one of the questions about how Police sometimes need to resort to violence to maintain the decorum of the country, His Holiness stated that all human actions entirely depend on human motivation and sometimes being harsh is required, in such situations, it is acceptable. “Some Tibetan deities are very wrathful, but it is still an expression of compassion for those who are mischievous. Similarly, as police, under certain circumstances, you need some strict method with sincere motivation and protection of people as the larger interest. Any action, whether positive or negative, entirely depends on motivation and goal”, he clarified.

When asked about the cure for personal and professional distress in a security personnel’s life, he talked about the significance of compassion and principles in one’s life. “The main motivation of Indian Police is compassion. The Indian Army should take pride in their principles and that will help them overcome the distress. Compassionate people are happier than those who are self-centered”, he stated.

“All sentient being love compassion, even animals and birds. Since we are social animals, our lives depend on the society and community. Loving ones community is for one’s own survival and happiness. People should be taught to be compassionate towards others. Selfishness never leads to happiness. But, the modern education lacks this teaching. Therefore, the modern education and ancient Indian secular teachings should be combined to lead to happiness”, Tibetan Spiritual leader said while stressing on the need of a holistic education approach that helps us attain both physical and emotional well being.

When asked about the most important trait in a security personnel, he said that intelligence combined with a sense of compassion should be the main trait. He also clarified that he is not in favor of death sentence because he believes that it is always possible to change a person’s nature and guide him to the correct path of principles.

M Chamachandran concluded the session by thanking His Holiness for giving a message of patience, mindfulness, empathy and compassion in policing. He also thanked the members of His holiness’ secretariat, Shri Amitabh Mathur, and members of IPF and other members of police fraternity.