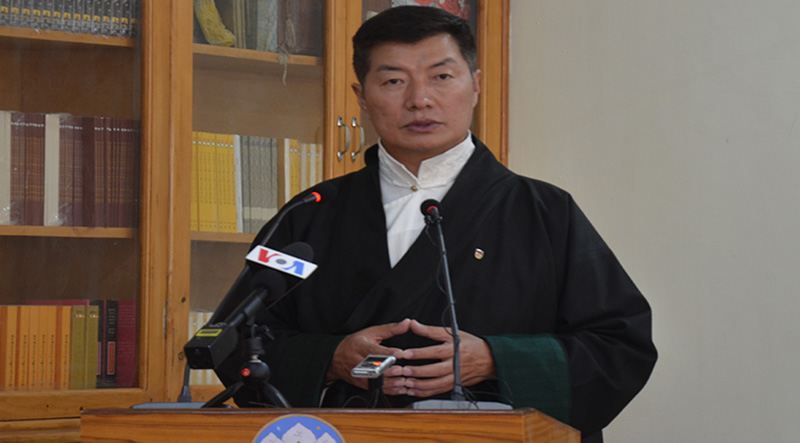 Dharamshala, India — “Tibetans have been the first minority to experience dark side of Chinese repression” said Dr Lobsang Sangay, President of the Central Tibetan Administration (CTA) in a conversation with, Palki S Upadhyay of WION News on February 5, 2021.

He talked about the Tibet Issue with Palki Upadhyay. They spoke about how the Tibet Issue was used as a blueprint by the Communist government of China to suppress minorities all over China, and India’s role going forward in safeguarding the interests of the Tibetan people in asylum as well as working towards a solution for a Free Tibet.

Addressing the ongoing Tibetan elections, the Sikyong expressed his pride in the gift of democracy given to the Tibetan people by His Holiness the 14th Dalai Lama of Tibet. “Our democracy is transparent unlike others, where you have to pay freedom tax to vote. Tibetans in more than 30 countries all vote on a single day. From New Delhi to New York to New Zealand, Tibetans do take part in voting. In the latest preliminary round, we had more 80 plus percent turnout even during the pandemic. So, it showed that our democractic system and participation is among the highest in the world,” stated Dr Sangay.

When asked about China’s actions on the Indo-Tibetan border and repression of Tibetans and other minorities, Dr Sangay expressed hope in the fact that the nations of the world are finally beginning to realise that China is not a country you can befriend or appease. Rather, it is one you should be wary of. The skirmishes between India and China along the Galwan Valley are, in his words, “A centuries old expansion strategy of the Chinese government.”

He also laid bare China’s systematic repression tactics used to suppress minorities across the country. As far as reports of state sanctioned rape and violence in minority communities are concerned, the Tibetan people have been the first minority to experience this dark side of Chinese repression. “These are their centuries old policies to culture discriminate and discourage Tibetan and other languages, so that they could assimilate them into Chinese people. Political pressure, repression, economic pressure and forced marriages and rapes of minority women are common occurrences,” affirmed the political leader of CTA.

In all of this violence and repression, the Tibetan people still believe that the Middle Way Approach as advocated by His Holiness the Dalai Lama is a viable solution. Dr Sangay stands by the Middle Way Approach and firmly believes that a non-violent approach is the only right way. “We need to have dialogue to solve an issue and we need to come to a middle ground. His Holiness the 14th Dalai Lama proposed a middle path and asked genuine autonomy for the Tibetan people within the framework of the Chinese constitution,” mentioned Dr Sangay.

According to him, the Chinese government is stubborn but they know that their policies will not work, because as long as there is repression in Tibet, there will also be resistance. Dr Sangay paid his tribute to the 155 Tibetans who have self-immolated in protests.

Talking about India’s role in the search for a solution to the Tibetan Issue, Dr Sangay maintained that India has been there for Tibet ever since they were invaded in the 1950s, and have helped the Tibetan people revive their culture and civilization in India. Having said that, he also maintained that in some ways, India let Tibet down during the actual invasion. “We hear that in the Galwan valley, 30,000 troops from India and China have come and billions of dollars are spent on a yearly basis just for the security. However, when Tibet was Independent, only 75 Indian soldiers were guarding the border. Cost was less than a small village security, unless the Tibet issue is solved, the peace or harmony between India and China is not likely, India has to accept that,” he asserted.

About the Tibet Policy and Support Act 2020, and India’s expected take on it, Dr Sangay believed that India will not let the Tibetan people down because just as the right to pick the next Dalai Lama lies solely with the Tibetan people, the various religions in India have picked their leaders for centuries. “Choosing of Dalai Lamas and other reincarnated Lamas should be exclusively with the Tibetans because we invented the reincarnation tradition. So, we have the full patent and copyright over it. Chinese government can manufacture duplicates but the original is original!” addressed the Tibetan political leader.

“In India, religious leaders are selected or elected by the people of that faith, similarly, as far as the Dalai Lama and other reincarnations are concerned, Tibetans should have the final say and Chinese government should not have any say. Neither India nor China should interfere in this matter. This is a clear-cut stand. India has 5000 years of history and evidence to back it up,” delivered Dr Sangay, expressing utmost faith in the Indian government when it comes to the matter.