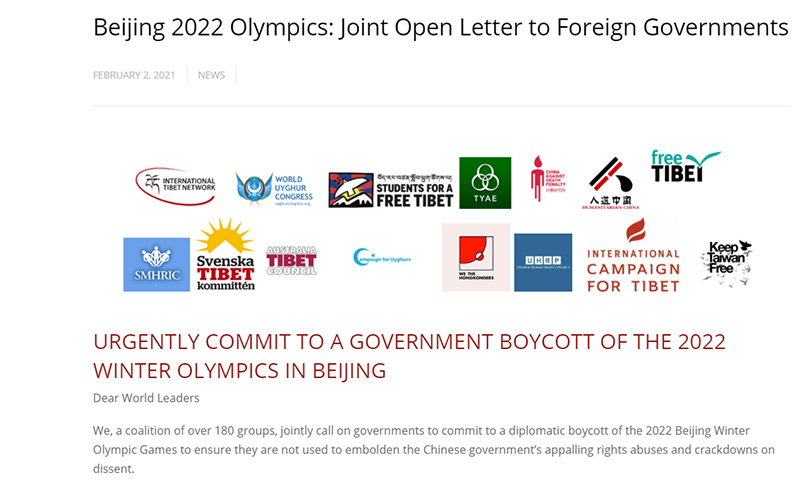 San Francisco, US – A joint open letter was published on International Tibet Network and signed by over 180 rights groups and activists calling on the governments in the world to boycott the 2022 Olympics to be held in Beijing, specifying their need "to ensure they are not used to embolden the Chinese government's appalling rights abuses and crackdowns on dissent."

“The situation in occupied Tibet has dramatically deteriorated and has been transformed into a surveillance state with over 1,000 political prisoners facing torture and even death; in Xinjiang, between 1.8 and three million Uyghurs and other Turkic peoples are arbitrarily detained in ‘re-education camps,’ enduring inhuman treatment and political indoctrination; in Hong Kong, the city’s vibrant community of human rights activists and outspoken youths have been rounded up by the thousands for simply advocating for democracy; in Southern Mongolia, children are being deprived of their right to speak their mother tongue, as the Chinese government has intensified its crackdown on cultural differences,” mentioned the letter which published on February 3, 2021.

“When Beijing was host to the 2008 Olympics, the International Olympic Committee (IOC) claimed that this would prove to be a catalyst for improved human rights. As human rights experts predicted, this decision proved to be hugely misplaced. Not only did China’s human rights record not improve but violations increased substantially without rebuke,” the letter stated asserted. At the end of July 2015, the International Olympic Committee (IOC) selected Beijing as the host city for the 2022 Winter Games. Due to this, China and IOC have faced huge criticism considering the country’s infamous human rights record.

For over two decades, numerous activists and human rights groups have repeatedly informed the IOC about the dangerous consequences of awarding China the Olympic games but they have refused to act. Despite clear evidence of genocide and worsening human rights situations, IOC’s inaction and failure to perform has coaxed the signatories to build pressure on different governments in the world.

“It now falls on governments to take a stand and demonstrate that they have the political will to push back against China’s reprehensible human rights abuses,” read the letter. The coalition also declared that anything less than boycotting the Beijing 2022 games will be seen as ‘an endorsement of the Chinese Communist Party’s authoritarian rule and blatant disregard for civil and human rights.’