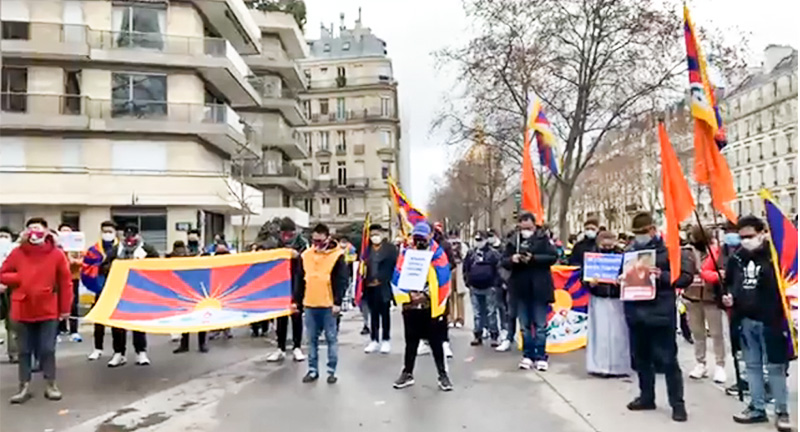 Tibetans held a demonstration outside the Chinese embassy in Paris to protest the unfair and unjust death of the young Tibetan monk, Tenzin Nyima on January 30,2021.

Paris, France – The Tibetan community held a demonstration to protest the unfair and unjust death of the young Tibetan monk, Tenzin Nyima, outside the Chinese embassy in Paris. The young monk sadly passed away after suffering serious injuries and torture at the hands of Chinese police while he was still under their custody on January 19, 2020. At the time of his death, Tenzin was only 19 years old.

The protest was coordinated by Students for Free Tibet on January 30, 2021, and they called for freedom of their home, Tibet, from the authoritarian regime of the Chinese government. The demonstrators said that come what may they would not be suppressed or scared from anything. Carrying Tibet’s flags and placards, more than hundreds of Tibetans assembled to raise slogans against the cruelty of the Chinese Communist Party. The government has been unjust for a long time now, and it is time for the world to notice and take a step to stop the extreme measures of torture and mental torments that the Tibetans go through each day.

Tenzin Nyima was also lovingly known to his family and friends as ‘Tamey’. He was at first detained along with three other monks. Kunsal (20), Soetra (18), and Tsultrim (18) were arrested two days later, when many transcribed flyers of Tibet’s independence were discovered around a local Chinese government office on November 7, 2019. Two other young men, Yonten and Choegyal hailing from DzaWonpo were imprisoned in the wake of organizing similar protests and sharing related recordings on WeChat, a mainstream Chinese messaging application. Looking at the age of these monks, one can understand the degree of oppression the Tibetans suffer in their own houses. These young people were the future pillars of society, people who only dreamt of freedom, and people who wanted to bring a change in the society. They were held and tortured just because they wanted independence for their nation, families, and themselves.

Choegyal’s younger brother, Nyimey was also detained on November 18, 2019, for displaying solidarity with the post that criticized the repressive policies of China and for supporting the monks from DzaWonpoGadenShedrup Monastery. This protest was a result of the forced attempt to acclaim the ‘poverty alleviation program’ of the Chinese government. The resettled nomads and local Tibetans were pressurized by the local officers to acknowledge this program.

Tamey was a young and promising 19-year-old Tibetan monk. He belonged to Dza Wonpo town, Sershul County, Karze in the traditional Kham province of Tibet. Six people including four monks and two common people were sentenced to five years in Chinese prisons for the same protests. After getting put into prison on November 9, 2019, he was released for a short period in May 2020, after which he once again got arrested, on August 11, 2020.

Tenzin was mercilessly tortured by Chinese officials while in custody. They tormented him so much that he suffered serious injuries. He was not even given proper food which in turn contributed to his deteriorated health. He soon went into a vegetative state and wasn’t able to move or speak. The authorities informed his family of his serious condition and asked them to take him from prison in early October 2020. Sustaining injuries, torture, and unfair treatment just for the idea of freedom is the correct example to show how the authoritarian regime has been inhumanely ruling over people.

He was soon taken to a hospital on October 6, 2020, in Chengdu where the doctors declared that his condition is so critical that the sustained injuries are beyond treatment. After raising the required fund of RMB 40,000 for Tenzin’s treatment, his family admitted him to several other hospitals in the hope that their son could be saved and treated but it couldn’t happen. He soon became paralyzed, comatose, and gravely sick. Tamey was hospitalized in Dartsedo, Kaeze prefecture on November 10, 2020, where the doctors after trying everything, gave up and discharged the poor young boy. His family brought him back and soon he passed away on January 19, 2021. This is not only heartbreaking for his family or Tibetan people but it is for every individual. The world lost a young boy who envisioned a free and better world.

"Chinese authorities have once again turned arbitrary detention into a death sentence. They should hold to account all those responsible for the brutal killing of the Tibetan monk Tenzin Nyima," said Sophie Richardson, Director at the Human Rights Watch, China while highlighting that the world needs to look upon the adversities faced by the Tibetans and join in the movement to stop the oppression of Chinese once and for all.

"The Chinese government should order a prompt and impartial investigation into the alleged torture of Tenzin Nyima and hold his abusers accountable," said the Human Rights Watch.