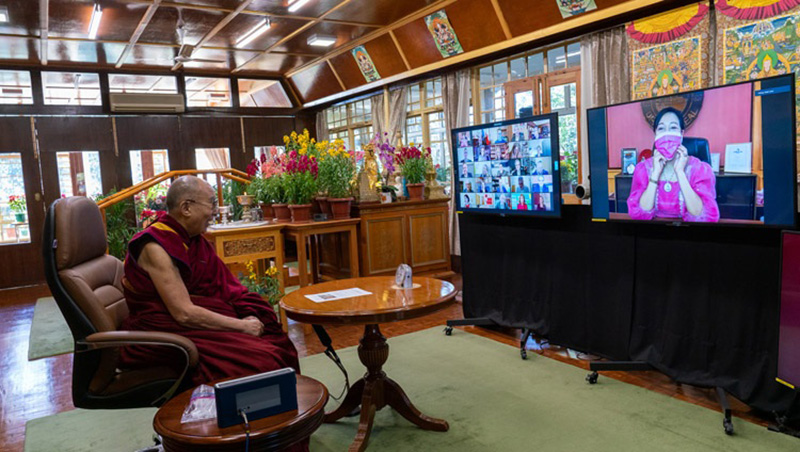 Mayor Maria Isabelle Climaco, Zamboanga, Philippines, playfully putting on her mask as His Holiness the Dalai Lama recommends following the advice of experts, including wearing masks, as he answers her question during their online conversation on Kind and Compassionate Leadership from his residence in Dharamsala, HP, India on January 27, 2021. Photo by Ven Tenzin Jamphel

Dharamshala, India – “We can combat all challenges if we act like one family,” said His Holiness the Dalai Lama in a conversation with mayors from different countries on the topic Kind and Compassionate leadership. The virtual conference was organised by Strong Cities Network and United States Conference of Mayors on January 27, 2021.

The conference was organised in the wake of struggles faced due to the pandemic and to put emphasis on the role of local leaders in promoting the message of oneness. Mayors from different countries participated in this intimate discussion with His Holiness the 14th Dalai Lama on how kindness and compassion can help us overcome all economic, social and political challenges.

“As humans, we are all the same. Scientists say that humans are social animals and every animal has a sense of togetherness by nature,” His Holiness said, while establishing the theme of the discussion. He believed that in today’s world, the major problem is the concept of individuality - something that the humans have themselves created. “The word ‘My’ is problematic. But since it is our own creation, we have the ability and power to overcome this,” he added.

“Human beings are unique because of their sixth sense, but this sixth sense or special intelligence is a major cause of problems itself,” mentioned His Holiness the Dalai Lama. “Nationality, religious belief and race is a secondary thing. We are human beings before anything else,” he continued. The Nobel Peace Prize laureate holds a view that if one practices the thinking of ‘We’ instead of ‘I’, the person shall never feel lonely in this world.

“With the advent of technology, the world is becoming a smaller place. Slowly, nations are assuming a sense of responsibility and are thinking more about humanity,” he further stated. He totally promoted the concept of oneness. “In order to live and sustain together in harmony, we must be truthful and honest to each other. We must develop mutual trust and co-operation amongst ourselves,” he explained.

While talking about the role of education, he is of the opinion that there is rarely any talk about inner moral values. “Indian values of ahimsa (non-violence) and karuna (compassion) are inner qualities that must be paid attention to,” he mentioned. “Moral education is very important to promote these values and positive emotions,” he observed.

His Holiness opened the floor for questions by mayors. Mayor of Zamboanga, Philippines, Maria Isabelle Climaco put forward a question about what humans can learn from the pandemic. In reply, the spiritual leader of Tibet appreciated the efforts of scientists and healthcare workers, who sacrificed their own comfort in carrying out research to tackle the virus. “We should learn from them. Also, we all must wear masks,” everyone gave a quick chuckle to His Holiness’ witty comment.

“What can the local leaders do today, that will make their communities more humane tomorrow?” asked the Mayor of Chattanooga, Andy Berke. In reply, the Nobel laureate said that people today are working together in co-operation, unlike previous centuries. “The creation and spirit of European Union is a significant example of how a union can be created on the basis of the virtue of oneness. All the mayors from different countries must come together from time to time and talk about their experiences,” he reminded.

Mayor of Calgary, Naheed Nenshi, posed a very unique question. “While we have a need to re-unite against racism amidst the Black Lives Matter and Indigenous Lives Matter movements, there are voices of hatred and division growing louder and louder. What can we as leaders do to help people live together in this land?” he asked. “If we look from a wider perspective, the unity amongst people has surely improved. However, we still need a constant effort to keep this intact. Through education and personal connection, people are coming closer to each other. We must believe in the power of helping each other,” His Holiness responded. He also expressed his gratitude to Mayor Naheed for taking care of the Tibetan refugees in Calgary.

Councillor Jørgen H. Kristiansen raised the issue of poverty, connecting it to war. “Do you think we can achieve the idea of a peaceful world without war, if we eradicate poverty?” he asked. His Holiness stated the example of the Vietnam war, that despite economic differences between the South and North, the war broke out due to political differences. “I think people all over the world are realising that in order to bridge the gap between the rich and poor, we need to work together. After World War II, people feared that there would be a third World War or Nuclear War, but leaders and nations have become more cautious towards this,” he affirmed.

“I want to see everyone in the world carry a genuine smile and be happy,” the Tibetan spiritual leader concluded. Greg Fischer expressed his gratitude to His Holiness the Dalai Lama, US Conference of Mayors and local leaders from across the world who participated in the discussion. Fischer summarized the conference with his favourite quote by His Holiness which reads “If you want others to be happy, practice compassion. If you want to be happy, practice compassion.”