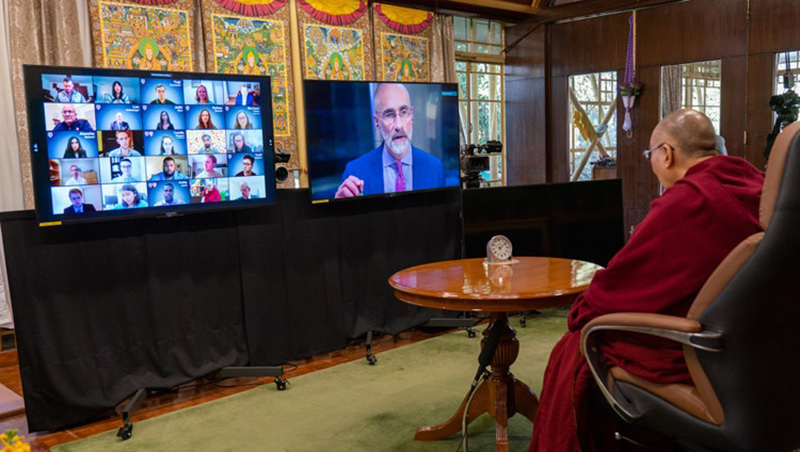 His Holiness the Dalai Lama in conversation with Arthur Brooks on Leadership and Happiness from his residence in Dharamsala, HP, India on January 17, 2021. Photo: Ven Tenzin Jamphel

Dharamshala, India — "A sense of community and compassion is important for happiness" said His Holiness the Dalai Lama while he is in conversation with Harvard Business School (HBS) professor Arthur Brooks, for a virtual session of the course titled Leadership and Happiness from his residence in Dharamshala, India on January 17, 2021.

The session was attended by HBS students from all over the world, the dean of Harvard Business School Srikant Datar, former dean Nithin Noria, the dean of Harvard Kennedy School Douglas Eldendorf and Len Schlesinger, a fellow professor teaching the course. Arthur Brooks opened the conversation by talking about the four sources of happiness taught by Tibetan Buddhism; spirituality, enlightenment, worldly satisfaction and wealth.

His Holiness the 14th Dalai Lama’s first response was to say how honored he felt to be talking to the students and professors. “The very purpose of our lives is to lead a happy life,” he went on. “Self-confidence with hope is the key factor for our survival. Just like we take care of physical hygiene, we need to pay attention to emotional hygiene as well. Negative emotions like fear and anger reduce quality of life, whereas meaning and purpose provide inner strength,” he added.

“Man is a social animal and it is in his nature to take care of others and help others. Selfishness not only contradicts this nature but is also an impractical way to live. We have to live together on this planet and we need a oneness of 7 billion human beings. Selfishness hinders our pursuit of happiness. Children at a young age have a real sense of community and companionship. They do not care about differences and distinctions of religion, nationality or race. A world education is necessary to teach principles and Harvard can be influential in sharing these ideas,” His Holiness explained.

“Today, the economic and climate crisis affects us globally. We can’t think locally anymore, we have to think beyond our own nation and our own continent. We have to use our human intelligence in a broader sense, considering all of humanity, not just ourselves” he further stated.

Talking about leadership, Brooks asked His Holiness why some leaders are unhappy people. “In my lifetime, I have met a number of religious and political leaders. Those who are open minded and liberal seem much happier, as opposed to those leaders whose thinking is self-centered,” the Nobel Peace Prize laureate answered. He again emphasized the role of the education system, stating that leaders will turn out unhappy if the education system encourages narrow-minded thinking. How in today’s world, we need to encourage a broad-minded and compassionate approach to humanity.

When asked about why so many people feel lonely today, the Tibetan spiritual leader talked about technology and the growth of cities in contrast with the nomadic lifestyle. “Technology helps us stay connected to each other but a sense of community is also important for happiness. Individualistic and a selfish way of thinking can cause loneliness. Nomads are physically distant from each other but millions of people live side by side in modern cities. The nomads know that should the need arise, they can call on each other for help. In cities, not only do neighbors not know each other very well, their level of trust is low,” he clarified.

Brooks put forward a question about how leaders can become more effective and happier. The spiritual leader of Tibet quoted what members of the Pritzker family had told him when they invited a group of Tibetans to settle near Chicago. They expressed appreciation of Tibetans' strong sense of community responsibility and peaceful way of life. They hoped that this would set an example for others to follow. His Holiness also admired the way that countries came together to form the European Union. He expressed the hope that young people today can learn from how these countries set their differences aside in favour of the larger community.

In replying to students’ questions about how technological developments influence the polarization of society, as opposed to developing harmony, compassion, and respect for differences, His Holiness stated that it depends on how we use technology. He gave the example of nuclear weapons and how they can deter war and preserve peace if they are not used. “How we use technology, such as social media, depends on our motivation and attitude. We must remember that we belong to one human community. Trying to live together in harmony on this one planet will lead to more positive results,” he stated. His Holiness declared that wherever he goes and whoever he meets, he regards them as human brothers or sisters.

“Ultimately, the success of life depends on us. We are our own masters. Knowledge and self-confidence are important but foolish or poorly founded confidence can be dangerous. Look at things from different angles. Analyze and investigate, but combine your analysis with warm-heartedness,” His Holiness said.

“Real happiness is related to our mind and emotions rather than material prosperity alone. Wealthy people have plenty but if they always want more, they feel discontented. Pursuing a materialistic way of life doesn’t provide all the answers, we also need to learn how to manage our emotions. We need to learn how to strengthen our constructive emotions and how to reduce those that are destructive”, said the spiritual leader of Tibet.

His Holiness told a student who wanted to know how he viewed different approaches to spirituality that one of his personal commitments is to respect all spiritual traditions. He observed that even though they have philosophical differences, they share a common message of compassion.

When asked what business and government leaders can do to bring happiness to others, His Holiness stated that since so many of the problems we face today are our own creation, it’s crucial to understand the workings of our minds and emotions. He stressed that we must be objective and secular.

Arthur Brooks briefly summarized the conversation, the main theme of which was that happiness arises from kindness and helping others. He hoped that the morning’s conversation would inspire young people to be the kind of leaders who lift others up and thanked His Holiness for his participation.