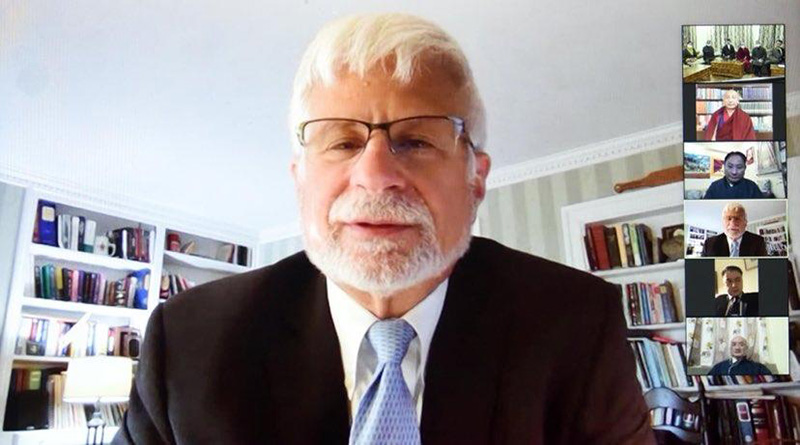 Robert A. Destro, US Special coordinator for Tibetan issues while addressing the Central Tibetan Administration (CTA) leadership in a virtual conference on January 12, 2021. Photo: CTA

Dharamshala, India — “China has robbed off the uniqueness of Tibetan Buddhism,” said Robert A. Destro, US Special coordinator for Tibetan issues while addressing the Central Tibetan Administration (CTA) leadership in a virtual conference on January 12, 2021.

The virtual discussion commenced with Destro speaking about his responsibility and duty towards the Tibetans. “Your job is to preserve your identity and ours is to provide you assistance. It is an honour to be at your service,” he mentioned. He expressed his gratitude to US Secretary of State Mike Pompeo for giving him the opportunity to work for the Tibetans and their cause. He assured vast support across the political spectrum for the community. He also congratulated the Tibetans in exile on their successful preliminary elections, which were recently held all across the globe.

“It is incredible to see the talent, strength and conviction of the Tibetans,” the special coordinator for Tibet issue pointed. He also mentioned how he and his team have urged many like-minded and empathetic countries to create their own versions of the Reciprocal Access to Tibet Act, so that the world can travel to Tibet as freely as the Chinese travel to our countries. “The other thing we can do from our end is to get the US Government to build an International coalition of countries. But we would also require co-operation from your end,” he further added.

Dr Lobsang Sangay, the president of CTA headed and moderated the discussion. He thanked Robert Destro for bringing hope and light to the Tibetan community. He further appealed to Destro and his team for preparing a report on Tibet, bringing into limelight the historical status of the country. Furthermore, he requested the special co-ordinator and his team to establish a coalition between the US ambassadors in different countries and the offices of Tibet since CTA is now officially recognised by the US Government.

Pema Jungney, Speaker of Tibetan Parliament-in-exile (TPiE) began by explaining about how the TPiE functions. “Democratisation has been an aspiration of His Holiness the 14th Dalai Lama since forever,” he clarified. He also talked about the importance of Party-less democracy, emphasizing on the views of activist Jayprakash Narayan.

Karma Yeshi, Minister of Finance expressed his gratitude to the US for approving direct funding. Grants from USAID and PRM helped them create the Kashag budget. Dr Sangay further proposed an increase in the funding, with the aim that they can run their administration without sharing ‘indirect costs’ with other recipient organisations.

Dr Pema Yangchen, Minister of Education too showed appreciation for the financial support by the US, that has helped their education infrastructure reach new heights. “Scholarship recipients have reached the highest level of Tibetan leadership and our literacy rate is 94% -a huge achievement for us,” declared the president of CTA. He wished for the third-generation Tibetans to read, write and speak better Tibetan than the second-generation Tibetans.

The topic shifted to various health-related services provided by the Health Department. “The financial support that from the US Government under the Tibet Self-Reliance and Resilience programme has helped us establish the Tibet Medicare system, covering almost 40% of Tibetans,” Choekyong Wangchuk, the Health Minister stated.

Co-ordinator Destro urged the Tibetan diaspora to reach out to all their host governments for support. He asked the people to co-operate and create practical solutions. He ensures to leave no stone unturned to bring the Tibetan visions into reality.

“Tibet settlements in India are one of the most well run and self-sustained settlements, almost corruption free” said the president. Dr Sangay concluded by mentioning the pride he holds for his identity and culture. He thanked everyone for joining the conference and said that he looks forward to more such discussions.