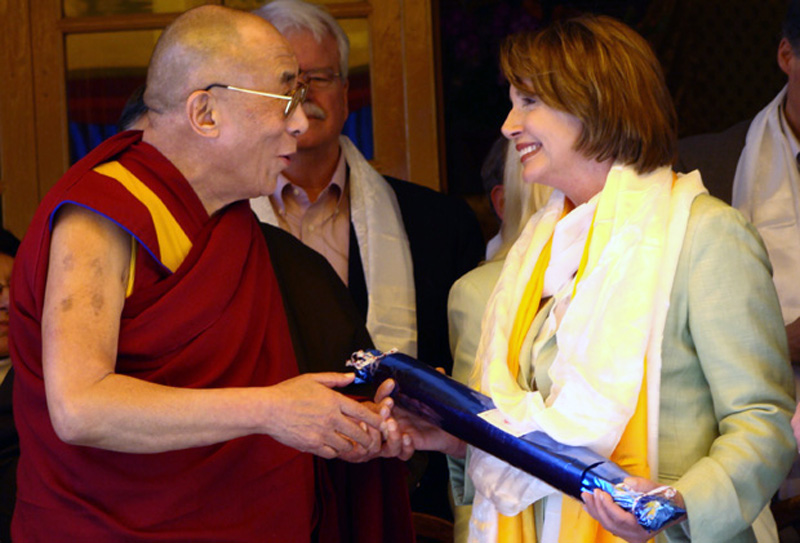 A delegation of US House of Representatives led by speaker Nancy Pelosi with His Holiness the Dalai Lama at main Tibetan temple in Dharamshala, India, March 21, 2008. Photo: TPI/Yeshe Choesang

Dharamshala, India—His Holiness the 14th Dalai Lama of Tibet offered his congratulations to Nancy Pelosi on securing a fourth term as Speaker of the US House of Representatives. He also sent her wishes of a Happy New Year on January 4, 2021.

“I have no doubt that as Speaker of the House, you will continue to play a crucial role in advancing the hopes and aspirations of the people of the United States, while also helping to shape a more peaceful and harmonious world,” the Tibetan spiritual leader wrote. “As always, I would like to express my deep respect and gratitude to you for your firm and ongoing support for the Tibetan people, as well as the personal friendship you have shown me,” he conveyed.

Speaker Nancy Pelosi has been a long-time close friend of His Holiness the 14th Dalai Lama and a staunch supporter of Tibetan issues. She has been vocal in the violation of Human Rights and lack of freedom in occupied Tibet under the repressive rules of Communist regime. Someone very close in the hearts of many Tibetans and other voiceless people under China.

She is a champion of International Democracy and Human rights. Someone who stands by truth, justice, and human values which is why she is also awarded the prestigious Democracy Award in December of 2020. She secured a fourth term as the speaker of the US, House of Representatives this time as well. Note of congratulations poured in from across the world for the speaker.

The Tibetan spiritual head also conveyed his prayers and wishes for the speaker in conclusion.