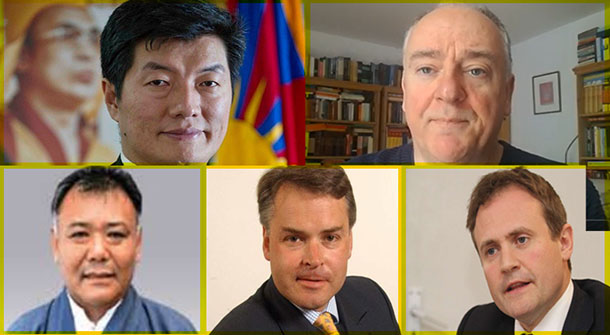 Dharamshala, India — A group of prominent panelists, with authority and expertise in their respective professions, recently discussed Tibet and Hong Kong in the wake of China’s passing of the controversial national security law for Hong Kong, systematically eliminating it's special status.

In his opening remarks, the democratically elected Tibetan political leader, Dr Lobsang Sangay said that "China also promised Tibetan peace and prosperity through its expansionist policy which afterward turned into treachery and tension, the beginning of the downfall of Tibet."

“Our experience has been tragic and now Hong Kong is going to be Tibet number-2. It’s unfortunate and our solidarity is with Hong Kong people,” he further said during the webinar organised by the Office of Tibet, London on Monday, July, 20, 2020.

"Although the UK is not alone to deal with the way that the Communist Party of China is behaving. Now, as far as the UK is concerned, there are very obvious touchstones, the most obvious of course in Hong Kong to whom we have remaining obligations under the Sino-British Joint Declaration and it is changing,' said Tom Tugendhat MP, Chairman of UK Foreign Affairs Select Committee.

'Other issues that have raised the profile, raise concerns amongst the Foreign Affairs Committee, the focal point is the nature of our university education and the attempts to influence that we've seen on unheard of in evidence from many different witnesses and this is causing huge concerns, amongst many independent academics, sadly, some academics, decided that it is easier to take the patient shilling than it is to raise concerns," the British lawmaker said.

"We're already seeing those different elements were dumped courses are becoming propaganda rather than academic study and that's a great tactless because it undermines not only the ability to study certain areas but it actually also undermined the independence and the academic excellence in some of our finest institutions," MP Tugendhat added, saying 'So those are the areas that we're seeing immediately and the latest changes we're seeing in the UK.'

MP Tim Loughton, Co-Chair of All-party Parliamentary Group for Tibet in the UK, touched on many subjects including the case of Huawei and his recent presentation of Tibet Reciprocal Access bill in the House of Commons. He said that after a lot of pressure, Huawei no longer going to provide the next generation of telecom in the UK.

He also mentioned China’s subtle yet effective influence in the UK boardrooms and expressed great concern about China’s growing influence on university campuses through Confucius Institutes. He acknowledged these institutions as the mouthpiece of China’s propaganda.

MP Loughton also highlighted the unfolding Hong Kong issues and affirmed what is seen there is very much like salami slicing of’ rights and liberty’ of the people of Hong Kong. He informed about an expected statement in the UK House of common where it is likely that the extradition agreement between Britain and Hong Kong would be held suspended. He calls it a ‘tangible move’.

“The legislation surely had a significant impact on China as various US Congress members including Marco Rubio, Ted Cruz, and others have all been banned from entering China. I, therefore, want to continue pushing for measures such as this to show China that we are absolutely serious so that China cannot go on threatening countries into submission,” he said.

In his concluding remarks, MP Loughton stated that in all the prevailing situations, it is important to not lose sight of the ongoing and long-standing atrocity and repression still taking place in Tibet.

In his final remarks, professor Kerry stated that the spotlight on the domestic issues in china as per his assessment is that the standardisation of ethnic minorities. That the ethnic minority issues are absolutely part of the security framework, a domestic policy framework which has no space for meeting other ethnic groups.

The panellists later took questions from the online audience which was read out to them by Representative Sonam Tsering Frasi who moderated the panel. Despite a minor technical glitch the discussion overall managed to highlight the eerie similarities of China’s aggressive moves in Hong Kong today to what China did to Tibet.

The panellists later took questions from the online audience which was read out to them by Representative Sonam Tsering Frasi who moderated the panel. Despite a minor technical glitch the discussion overall managed to highlight the eerie similarities of China’s aggressive moves in Hong Kong today to what China did to Tibet, according to the Office of Tibet, London.