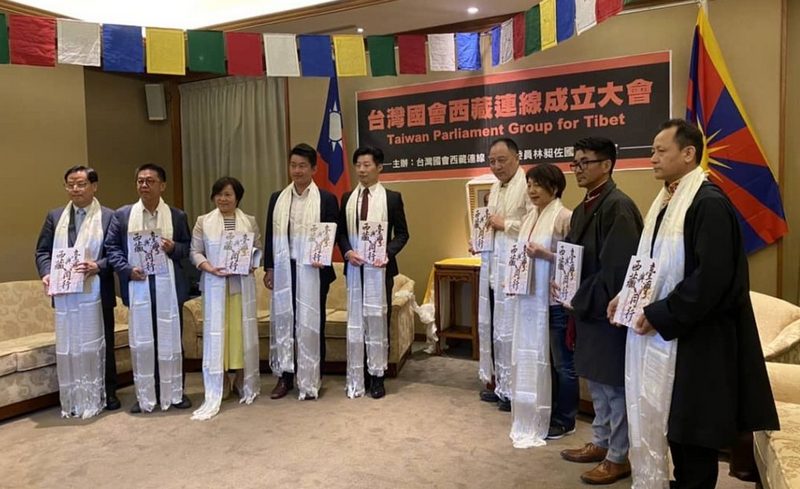 Members of the Taiwan Parliament group for Tibet with Representative Dawa Tsering and Tibetan activists, in Taipei, Capital of Taiwan, on July 8, 2020. Photo: OOT, Taipei, Taiwan

Taipei — The newly formed Taiwan Parliament Group for Tibet said Wednesday that they will continue to support Tibetan cause and they urge the government of Taiwan to make a clear statement in support of a visit by His Holiness the Dalai Lama, the 1989 Nobel Peace laureate without any restriction from China.

On Monday, Taiwan's Ministry of Foreign Affairs (MOFA) said the government had not received an application for the Dalai Lama to visit the country but would welcome him "at a time convenient for both sides."

At a press conference on Wednesday, July 8, Independent Legislator Freddy Lim said 46 lawmakers across party lines had joined the new legislative group, which is seeking to strengthen ties between the people of Taiwan and Tibet, provide support for Tibetans living in Taiwan, and work with international human rights groups to advance the Tibetan freedom struggle.

Freddy Lim who is also Chair of the newly Taiwanese parliamentary support group for Tibet said on that His Holiness the Dalai Lama should be allowed to visit Taiwan without any restriction from the totalitarian communist regime in China during the founding event of the "Taiwan Parliament Group for Tibet" (台灣國會西藏連線).

MP Lim was speaking during the press conference held for the newly formed parliamentary group for Tibet in Taiwan Legislative Yuan. MP Lim explained the aims and objectives for establishing the parliamentary group and said that the group aims toward collaborating and consolidating efforts to highlight the issue of Tibet in Taiwan as well as on the international platform.

The Taiwanese lawmaker Lim also called for an ‘open attitude’ from the Taiwan government regarding ‘future visits of His Holiness the Dalai Lama’ since His Holiness has over the past decade made several visits to the country.

The newly formed parliamentary group for Tibet consists of representatives of various political parties and participated by 46 MPs who had registered for the group. Freddy Lim added that that new group at the Legislative Yuan will coordinate with similar organisations overseas to help defend the human rights and freedom for Tibet.

On July 5, the day before His Holiness the Dalai Lama's 85th birthday, he said in a video message to his followers and supporters in Taiwan that he would like to visit them again. The spiritual leader of Tibet visited Taiwan in 1997, 2001 and 2009 but has not done so since President Tsai Ing-wen first took office in 2016.

The participants also assured their commitment to stand against Chinese expansionist ambitions and promised to stand by Tibet, Xinjiang, and hong kong in their struggle for freedom, human rights, and democracy.

The formation for the Taiwanese parliamentary group for Tibet was first announced in 2012 by MP Hsiao Bi-Khim who was also the Vice-chair of the parliamentary group.  On 27 October 2016, the group was established under the leadership of Chairman Freddy Lim.

The Taiwanese parliamentary group for Tibet is a bipartisan group of parliamentarians from across the Taiwan political spectrum whose primary aim is to raise Tibet issue in Taiwan as well in the international community.

Over the past seven decades under the illegal occupation, Tibet continued to undergo deeper ongoing political repression, social discrimination, economic marginalisation, environmental destruction, and cultural assimilation. The illegal Chinese migration to Tibet which is fueling intense resentment among the Tibetan people resulted in the greatest threats facing Tibet today.

Since 1959, China has repeatedly lied about the history of Tibet and Tibetan people get bullied and abused by the Chinese communists repeatedly and intentionally with aggressive and hostile behavior. China has passed wide-ranging new laws and regulations one after another ultimately and deliberately restricts freedom of protest and freedom of speech, completely eroding basic human rights of Tibetan people, under serious threats of different banners such as 'ethnic unity, Separatism, and terrorism'.