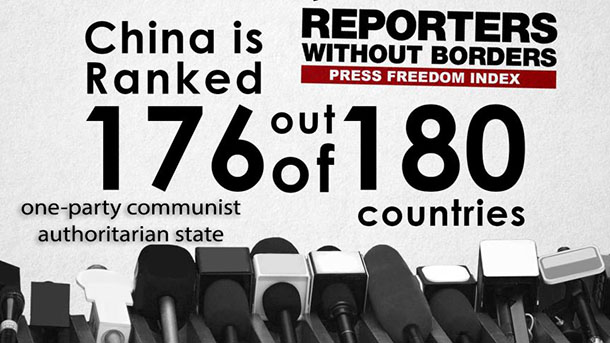 The dictatorship in China as a communist-authoritarian regime practices a policy of political repression and violence. Photo: File

Paris — Reporters Without Borders is calling on the Chinese authorities to reverse their decision to expel three Wall Street Journal journalists based in Beijing because of an opinion piece the newspaper published about China’s handling of the coronavirus epidemic.

The decision was announced on Wednesday, February 19th by foreign ministry spokesman Geng Shuang, who said the journalists’ press cards were being withdrawn because the article contained “racially discriminatory” language and because the newspaper failed to apologize.

Although they had no role in writing the opinion piece, the three journalists – deputy bureau chief Josh Chin and reporters Chao Deng and Philip Wen – have been given five days to leave the country. Chin and Deng are US citizens and Wen is Australian.

The decision to expel them came one day after the US government announced that it was changing the status of five Chinese state-owned media outlets in the United States. Officials said they would be treated as foreign embassies because they were government propaganda mouthpieces.

"RSF urges the Chinese government to rescind this triple expulsion at once because it constitutes a serious press freedom violation," said the Paris-based press freedom watchdog.

“The coronavirus epidemic is of great interest to the international public and it is normal for a media outlet such as the Wall Street Journal to publish analyses and opinion pieces on the subject,” said Cédric Alviani, the head of RSF’s East Asia bureau. “If the Chinese authorities don’t like the tone of this particular article, they can use their right of reply to present their counter-arguments. But reprisals against media outlets or their employees are unacceptable.”

The Chinese regime often uses the threat of withdrawing press visas to pressure foreign media outlets. Wong Chun Han, a Beijing-based Singaporean journalist working for the Wall Street Journal, was forced to leave on 30 August after reporting that a cousin of President Xi Jinping was being investigated in Australia as part of a probe into money-laundering.

No fewer than nine journalists have had to leave China since 2013 because the Chinese authorities failed to renew their press visas on expiry. The victims include Ursula Gauthier, a reporter for the French news magazine L'Obs, who had to leave in 2015.

The regime has been much criticized for its opaque handling of the ongoing coronavirus epidemic, which has so far killed more than 2,000 people and infected an estimated 70,000, mainly in China.

In January, many Chinese Internet users took the risk of publicly expressing their discontent with the lack of transparency. The authorities responded by arresting two citizen-journalists, Chen Qiushi and Fang Bin, and several political commentators, and by stepping up censorship of media outlets and social networks.

Media freedom in China, particularly in occupied Tibet and East Turkestan is among the worst in the world — ranking 176 out of 180 countries on Reporters Without Borders' World Press Freedom Index.

A leaked 2013 government edict openly attacked Western media saying: "the West's idea of journalism undermines our country's principle that the media should be infused with the spirit of the communist party."