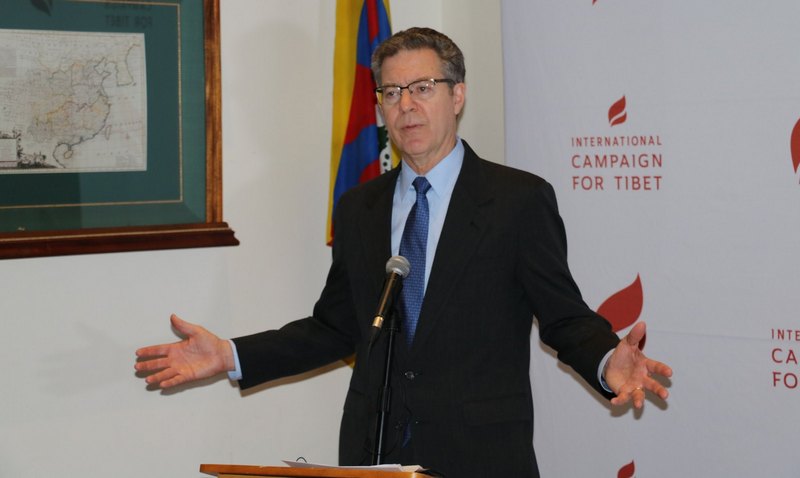 US Ambassador at large for International Religious Freedom Sam Brownback speaking during an event held at the International Campaign for Tibet in Washington DC, US, December 10, 2019. Photo: ICT

Washington DC — 'Tibetan Buddhism is going to outlast the Chinese government and we are here to stand with you and to be a part of this fight,' a top American diplomat responsible for monitoring international religious freedom said on Friday, the day marked the 30th anniversary of His Holiness the Dalai Lama winning the Nobel Prize in 1989.

Spearheading the celebration, US Ambassador at large for International Religious Freedom Sam Brownback had heartening news to share with the listeners. Brownback, who had previously met with His Holiness the Dalai Lama in Dharamshala, India in October 2019, made a moving speech, remarking that China’s barrage of Tibetan’s religious freedom would not prevail in the long run. “They can be successful for a period of time,” he said. “But Tibetan Buddhism is going to outlast the Chinese government and we are here to stand with you and to be a part of this fight.”

The event was held on Tuesday night, December 10, 2019, at the International Campaign for Tibet (ICT) in Washington, DC. The day marked the 30th anniversary of His Holiness the Dalai Lama winning the Nobel Prize in 1989. Celebratory activities began with an inspiring look at His Holiness’s past winning the Nobel Prize 30 years ago and concluded with a promising look at the future for Tibetan people. The commemorative festivities included speeches and important news given by US officials and delegates of other nations in support of Tibet.

Importantly, he addressed the Reciprocal Access to Tibet Act (RATA), which became law last year. The act targets Chinese officials that are guilty of disallowing American diplomats, journalists, and citizens from visiting Tibet. Through the State Department, the US will deny or revoke the culpable parties visas to the US. During his commentary, Brownback shared with the audience that the State Department will produce a report this month stating which specific Chinese officials have been denied entry to the US under RATA.

The action taken by the US and by Sam Brownback “is very meaningful,” said ICT President MatteoMecacci. “RATA received unanimous, bipartisan support in Congress, but its effectiveness was always going to depend on how seriously the State Department implemented it.” He went on to say that “With Ambassador Brownback, a member of the State Department, announcing that the report of who has been banned from entering the US under RATA will be sent to Congress this month, we are hopeful that the department will fully and effectively implement it.”

US Representative Andy Levin (D-Mich.) also declared enthusiastic support for Tibetan rights. “I’m a new member of Congress,” Levin said, “and I’ve just arrived, and I’m ready to work as long as it takes, and as difficult as the fight is, to lift up the Tibetan community and save Tibetan culture in Tibet.” Levin has been a longstanding advocate for Tibet. While attending graduate school he studied the Tibetan language for a year in Sarnath, India at the Central Institute for Higher Tibetan Studies. Throughout his speech he proved to the astonished crowd that he has retained the knowledge, embellishing his vote of confidence with Tibetan words and phrases. Additionally, in 1989 Levin attempted to enter Tibet, although Chinese forces stopped him. After returning to the US he interviewed His Holiness in Los Angeles only a few days before it was declared that he had won the Nobel Prize. In reference to His Holiness, Levin said he is “a real hero of mine.”

Levin’s colleague from the House Foreign Affairs Committee, Representative Ted Yoho (R-Fla.) also spoke at the event, addressing a resolution that he had helped to introduce to the House of Representatives in November 2019. The resolution praises His Holiness’s committal to nonviolent action and requests a bilateral forum between Congress members and His Holiness. “As Andy and I know, the things that we hear about and we see, we need more Dalai Lamas…We need more of those around the world to show tolerance, peace, prosperity and just a way of life that if we all adhered to, this world would be a lot better place,” Yoho said.

Many in attendance echoedYoho’s opinion that His Holiness serves as an important figure of harmony in the current fragmented world. During his speech, ICT Vice ChairmanGare A. Smith discussed the unifying quality of the Tibet cause and specifically of His Holiness. Smith worked for the late Senator Ted Kennedy (D-Mass.) 30 years ago when His Holiness received the Nobel Prize. “I had never, at that time, seen anything that was more unifying among the parties, then or today, than His Holiness the Dalai Lama,” Smith said, “It really didn’t matter who you were or where you sat, everyone supported His Holiness, and everyone supported His Holiness’ message of peace.” He reflected that in winning the Nobel Prize, His Holiness helped to give the ICT greater recognition, as it had been founded only a single year prior.