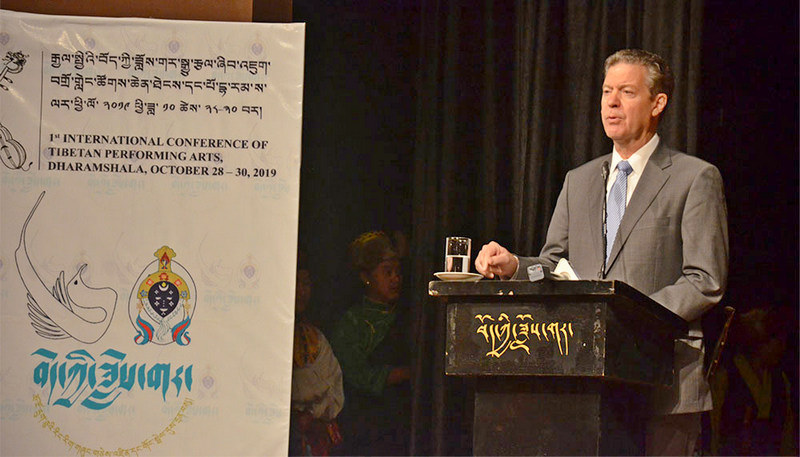 Dharamshala — "Within the cultural heritage of all humanity, Tibetan culture is a treasure of humanity and the threat it faces is an offense to the civilized world," US Ambassador for International Religious Freedom Samuel D. Brownback said, when addressing the opening ceremony of the First International Conference on Tibetan Performing Arts in Dharamshala, India, on Monday, October 28, 2019.

The presence of the head of the U.S. State Department’s Office of International Religious Freedom marks the highest-level endorsement of the US government in the ongoing efforts for the revitalization of Tibetan art, culture and faith in the diaspora.

The presence of the head of the U.S. state department’s Office of International Religious Freedom marks the highest-level endorsement of the US government in the ongoing efforts for the revitalization of Tibetan art, culture and faith in the diaspora.

Ambassador Brownback made the strenuous journey from Washington DC to the exile seat of Central Tibetan Administration in north India to deliver a message of hope and inspiration to Tibetans inside Tibet; at the same time, to tell China in clear, definite terms that the US Government prioritizes the protection of the inalienable right of religious freedom and condemns its violations at all levels anywhere in the world.

The U.S Ambassador addressed some of the most critical issues concerning human rights and religious freedom inside Tibet and especially on the reincarnation of the Dalai Lama, on which regard the Ambassador distinctly asserted the sole authority of His Holiness the 14th Dalai Lama and the Tibetan Buddhist system.

Over 26 scholars-Tibetan and non-Tibetan-from 10 countries invited, this year’s gathering marks the first-ever and the highest-profile convening on Tibetan art and culture in the exile history of Tibet.

In his keynote address, the U.S. Ambassador Brownback also spoke about religious freedom and human rights and he profusely extolled the President Dr Lobsang Sangay and his Cabinet (Tib: Kashag) for providing outstanding leadership to Tibetan people and deemed it his honor to join the celebrations and meeting His Holiness the Dalai Lama earlier Monday.

He began by saying to them “I am delighted to be with you. And I am here to talk about freedom as a basic message that I want to deliver to you all. I have seen some of the Tibetan cultural performances before and they are inspiring. It’s a great honor to join you and it’s a great honor to be with His Holiness the Dalia Lama earlier today and we shared the belief in the importance of living together with love and compassion, justice, forgiveness, respect, and peace."

"His Holiness once in the years past mentioned that ‘intolerance leads only to hatred intervention’. He spoke about a worldwide education and unity to overcome such intolerance. It is true for people and government alike," Brownback said, adding: "There must be a protection of Religious Freedom for all people everywhere all the time. It is a right, the government must protect if their people are to prosper."

"The governments are not religious institutions but they are expected to protect the rights of the individuals to practice their beliefs, a right without which people cannot thrive. I m here to celebrate with you the distinctive identity of Tibetans including the spiritual foundation that derives from Tibetan Buddhism and the rich artistic life that continues to grow and thrive in Dharmashala in elsewhere," said the senior U.S. diplomat.

He went on to say: "The United States administrations had profound and binding interest in the welfare of Tibetan people and the struggles that they continue to face, this is in part because of our deep respect for the Tibetan language, for the rich religion and culture. Within the cultural heritage of all humanity, Tibetan culture is a treasure of humanity and the threat it faces is an offense to the civilized world."

"We are also motivated by the strong bonds between the people of the United States and Tibet. Bond of mutual admiration grounded in our shared respect and values of compassion, inclusiveness, and rule of law. A pocket watch was gifted to His Holiness by then US President Roosevelt when he was a boy and to the tens of thousands of Americans who visit Dharamshala daily to learn Tibetan Buddhism from Tibetan lamas," he said.

He further remarked that "the ties between Americans and Tibetans grow ever closer each year. Tibet has embraced American as one of your own just as we embraced you. We also stand in solidarity with Tibet because we have learned from painful experience. There are injustices allowed to exist to uncheck oppression inevitably spread and new abuses are perpetrated." "If one religion can be restricted and abused so too can and will the others. When the most deeply held tenants of faith are subjected to political scrutiny and control in one place, they are not safe anywhere. I call on the Buddhist communities of Vietnam, Srilanka, Mongolia, Thailand to understand what happened to their Tibetan brothers and sisters," Brownback continued.

"I call to all the Christians, Muslims communities of Asia to bear witness to the struggle of their Tibetan brothers and sisters. Kingdoms come and go, the culture should be protected unfiltered and unsuppressed by government and parties so that the individuals are free to express themselves to challenge the Status-quo to descend to cry out in anger to an expression of faith, tragically those freedoms do not exist in Lhasa or any apart of Tibetan plateau which makes this institution all the more necessary and more important," he added.

"As the representative of the international community, the United States is deeply concerned about the CCP’s escalating widespread and undue restrictions on religious freedom. We are calling the Chinese government to respect Human Rights and fundamental freedom of all individuals everywhere all the time. We are deeply concerned over the attempts to assert, Chinese communist party influence in Monasteries or banning Tibetan children from participating in religious activities exist," he stressed.

He further remarked that "Beijing had long interfered with the succession process for spiritual leaders in Tibet. Most outrageously when in 1995, the Chinese government abducted the 11th Panchen Lama when he was 6 years old along with his parents. We call on the PCR government to release immediately the Tibetan recognized Panchen Lama Gendue Choekyi Nimya or share the truth about his flight with the world”.

“In closing, I commend to you the powerful image of the Snowlion, symbol of Tibet found throughout Tibetan visual and performing arts, paintings and dance joyful, fearless, strong and free. Thank you for your time, thank you TIPA for hosting me and God.”

The Office of International Religious Freedom in the U.S. Department of State said it has the mission of promoting religious freedom as a core objective of U.S. foreign policy and monitors religious persecution and discrimination worldwide, recommend and implement policies in respective regions or countries, and develop programs to promote religious freedom.

President of the Tibetan government in-Exile Dr Lobsang has repeatedly reiterated its commitment to the His Holiness the Dalai Lama’s Middle Way Approach that seeks "genuine or meaningful autonomy" for Tibet within the framework of the People’s Republic of China. However, over the past 70 years, the Chinese communist-totalitarian rule in Tibet has driven by cultural genocide, political repression, cultural assimilation, social discrimination, economic marginalization, and environmental destruction.