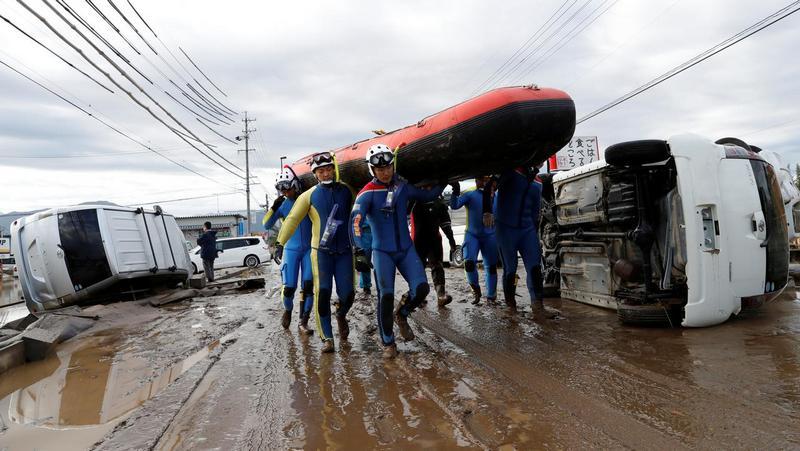 Rescue workers carry a rubber dinghy as they search a flooded area at the Chikuma River in Nagano Prefecture, Japan, October 14, 2019. Reuters

Dharamshala, India — The spiritual leader of Tibet, His Holiness the Dalai Lama has conveyed condolences to the government and people of Japan over the destruction and deaths caused by a massive storm known as "Typhoon Hagibis".

His Holiness wrote to Shinzo Abe, the Prime Minister of Japan on Monday (Oct 14) to offer his sympathy and deepest condolences after a powerful typhoon over the weekend left more than 70 people dead.

“I would like to offer my condolences to the families of those who lost their lives as a result of the recent Typhoon Hagibis,” the Nobel Peace Prize laureate wrote, noting that it also caused unprecedented damage to property and has disrupted life in general.

Offering sympathy for suffering caused by the storm in Japan, the spiritual leader of Tibet said: “I would like to congratulate you and your Government for the efficient measures that you have put in place in anticipation of the storm and its consequences."

“As you know, I have been able to visit Japan quite regularly over the years and I have been deeply touched by the love and affection that the people there have shown me, as well as the interest they have taken in my efforts to promote human values and peace of mind.”

Hagibis has been described by media as the worst typhoon to hit Japan in decades, having flooded some 33,000 homes and forced thousands into shelters. His Holiness’s letter ended with the reassurance of his prayers for those in distress.

Saddened by reports in the news of the destruction wrought in Japan by the worst storm in decades, condolences from world leaders have been pouring into Japan after Typhoon Hagibis hits the nation.

Typhoon Hagibis slammed into Japan on Saturday night, with heavy rain causing landslides and dozens of rivers to burst their banks. By Tuesday night, Japanese media reported that at least 77 people had died, with about a dozen missing.