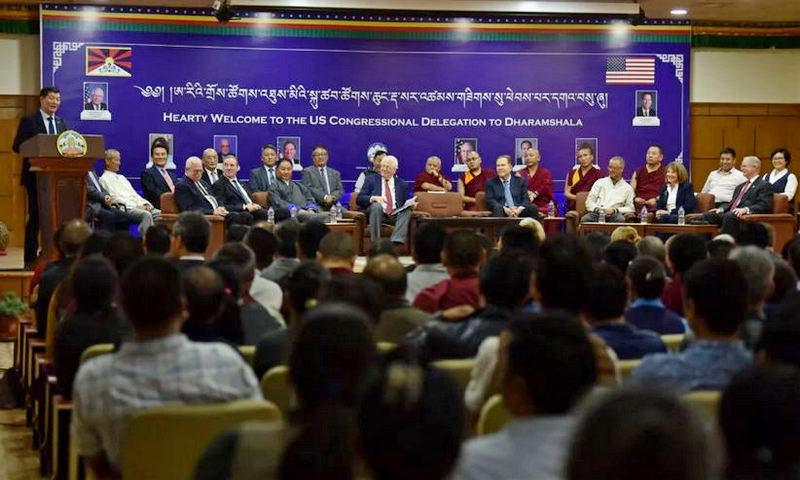 Dharamshala, India — “For the Tibetans inside Tibet, your presence reassures and reaffirms their belief in the just cause of Tibet by sending them hope and inspiration”, the President of the Tibetan-government-in-exile, Dr Lobsang Sangay said during a welcome reception in honor the visit of a US delegation— Members of the House Democracy Partnership, a bipartisan commission of the US House of Representatives, who assured their support to the cause of Tibet.

The President made the remarks when the Central Tibetan Administration (CTA) hosted a grand welcome reception for the six bipartisan Congressional delegations of the U.S House of Democracy Partnership at T-building in Gangchen Kyishong.

Heads of the three pillars of Tibetan democracy which include the Kashag, Tibetan Parliament-in-Exile, and the Tibetan Supreme Justice Commission, heads of the Autonomous bodies and all the CTA Offices filled the auditorium to pay their respect and expressed their gratitude to the Congressional delegation.

President reminded the gathering that His Holiness parting message to the delegation exemplifies the strengthening love and respect shared between the Americans and Tibetans. He quoted His Holiness message which said, “today we will separate physically by saying goodbyes but in spirit, we will remain united”.

President also reminded that the presence of such high-level Congressional delegation in Dharamshala is sending a strong positive message to Beijing that democracy is inevitable and universal. He pointed out that the presence of delegation in Dharamshala where three pillars of Tibetan democratic government in exile is seated signifies that democracy and human rights are the values that need to be embraced and supported.

“For the Tibetans inside Tibet, your presence reassures and reaffirms their belief in the just cause of Tibet by sending them hope and inspiration”, asserted President Sangay. By doing so, President was optimistic that Tibetans inside Tibet will regain their momentum to keep on going until freedom is restored in Tibet until His Holiness returns to Tibet.

President Dr Sangay also declared that the Tibetans inside Tibet will continue to look up to the U.S for their support based on today’s visit. He once again extended the heartfelt gratitude to the six members U.S Congressional delegation and remarked how honored and privileged the Tibetan government is for hosting them in Dharamshala.

The Tibetan President Friday warmly welcomed the US delegation upon their arrival, at the Norbulingka in Dharamshala, a hill station in the Northern Indian state of Himachal Pradesh, on August 2, 2019, by offering traditional Tibetan white scarves. He remarked that it was a joyous and an honored moment for the Tibetan government in-Exile to have the presence of some of the high-level US Congressional delegation of the House of Democracy Partnership in Dharamshala.

Tibetan President recounted about his last meeting with Congressman David Price last November where both he and the Congressman Price had a discourse on wide-ranging Tibet and Tibetan related topic particularly the discussion on the system of Tibetan democracy in exile. Because of the conversation that transpired between Congressman Price and President Dr Sangay, the visit of the delegation took place Friday as Congressman Price expressed his earnest wish to visit.

“This is by far the fastest invitation accepted and executed by any parliamentary delegation,” remarked the Tibetan President. Dr Sangay also announced that His Holiness the Dalai Lama was pleased about hearing their arrival in Dharamshala, and there will be a luncheon reception for the delegation at His Holiness the Dalai Lama’s residence tomorrow.

Congressman David Price expressed joy over his productive visit to Dharamshala and said, “We are interested in the representation work of the Tibetan parliament in exile.” He thanked Dr Sangay for arranging an audience with His Holiness the Dalai Lama and for the luncheon they will be having with His Holiness afterward. Price once again thanked the Tibetan Administration for the invitation.

Later, US delegation visited the Institute’s temple and toured around Institute’s workshop to witness the Tibetan artwork and crafts such as thangka painting, statue making, woodcarving, tailoring, weaving, and so on.

A total of 6-member U.S Congressional delegation led by Chairman David Price and Vice-chair Vern Buchanan of the House of Democracy Partnership along with the staffers, escorted by the head of the Office of Tibet in Washington, DC, Ngodup Tsering, who in this capacity is the Representative of His Holiness the Dalai Lama to North America.

During their two-day visit in Dharamshala, the delegation was granted a private audience with His Holiness the Dalai Lama, on Saturday. The U.S. delegation met with top Tibetan officials and members of the Tibetan Parliament-in-Exile, as well as other representatives of the Tibetan community.

Explaining the visit of the high-level U.S Congressional delegation, Sonam Norbu Dagpo, Secretary of the Department of Information and International Relations explained that delegation consists of 6 members  U.S bipartisan delegation of the House of Democracy Partnership. 'The delegation was accompanied by the staffers, military escorts and staff of the embassy constituting comprising about 32 guests in total.'