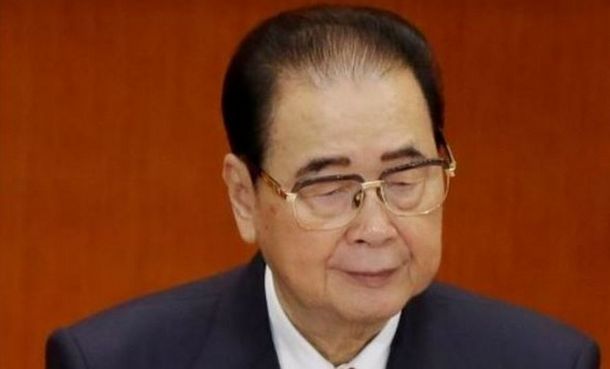 Li Peng — known as the “Butcher of Beijing” for his role in the Beijing crackdown and responsible for perpetrating serious human rights violations in Tibet— has died at the age of 90, on July 22, 2019. Photo: File

Former premier of the Chinese communist totalitarian regime Li Peng who was known as the “Butcher of Beijing” for his role in the Tiananmen Square crackdown and responsible for perpetrating serious human rights violations in occupied Tibet, crimes such as torture or genocide — has died at the age of 90.

Li who later became a mass-murderer died of an unspecified illness in Beijing after he failed to respond to medical treatment late Monday, Julu 22, 2019, the Chinese state-run media Xinhua news agency reported. Li who was one of the most violent dictators in China had previously battled bladder cancer.

Li gained notoriety worldwide as one of the key architects of the brutal breakup of mass pro-democracy demonstrations in the capital on June 4, 1989, and stayed at the top of the Communist regime for more than a decade, while remaining a hated symbol of the evil repression until his death. He was premier from 1988 to 1998, during which time he presided over the Tiananmen Massacre, ordering a military crackdown against pro-democracy student protesters in June 1989.

On 21 April 1989, protestors gathered in Tiananmen Square to request a stronger struggle against corruption and for the protection of the rights and freedoms granted in the Chinese Constitution. Whilst the government of the former Chinese President, Zhao Ziyang, wanted to achieve a peaceful solution, Li called to return to order by using force. Zhao Ziyang only had minor support. He was dismissed and placed under house arrest.

Martial law was proclaimed on 20 May 1989 and the Army invaded Pekin during the night of 3 and 4 June. The clashes between militaries and protestors resulted in several hundred deaths. Following the Tiananmen crisis, Li was re-elected to the permanent Politburo committee during the first plenary session of the 15th Central committee of the CCP.

On 28 August 2000, an accusation was filed before Manhattan Federal Court against Li or his alleged participation in the repression of protestors in Tiananmen Square. This judicial action was introduced by four former academic leaders, including Wang Dan and Zhang Liming, the brother of a 21-year-old student who was killed during the military assault.

A report from the International Commission of Jurists (1997) came to the conclusion that the repression of Tibet started in 1994, when the high-ranked Chinese officials, including Li, chose to adopt a new strategy for the country. This was followed by a greater influx of Chinese migrants to Tibet, tighter controls on religious activities, a strong smear campaign against the Dalaï Lama and his religious and political influence, increased surveillance, political and arbitrary arrests, and widespread suppression of protests.

The practice of torture was common among police stations and in Tibetan prisons. Methods included severe beatings with chains, sticks with protruding nails and iron bars, inflicting shocks using electric prods for cattle on some sensitive parts of the body, suspending them with their arms tied behind their backs and exposing them to frozen water or to freezing temperatures.

Also, these torture techniques were specifically directed at certain groups of people. Women, in particular, the religious ones, were victims of rape with the help of electric prods used for cattle, their chests were also aimed. Tibetan population growth was regulated and controlled mainly by limiting the number of children families could have, they did this by imposing fines, abortions and forced sterilisations.

The Li case is part of the eight first complaints filed against former Chinese politicians regarding the crimes committed in Tibet.

On 1st October 1949, Mao Tse-tung proclaimed the foundation of the People’s Republic of China. Soon after, the following year, the newly created Republic invaded Tibet.

In 1951, a seventeen point treaty established the sovereignty of China over Tibet. During the following decades, several uprisings took place and were brutally repressed by the Chinese authorities.

In March 1959, a Tibetan insurrection was bloodily crushed by the Chinese troops. It was at this time that the Dalai Lama went into exile in India. According to certain sources, this massacre led to the death of some 87 000 Tibetans and to the exile of 80 000 of them to India, Nepal, and Bhutan.

At that point, China set up a wide-ranging ethnic cleansing policy by imposing the Chinese Communist regime on the Tibetan people: traditional Tibetan social structures were disbanded, religious practice was curtailed and Tibetan Buddhism was oppressed.

According to a Spanish based Tibetan Support Group (Comite de Apoyo al Tibet), a million Tibetans are said to have been assassinated or displaced since 1950 and more than 90% of cultural and religious institutions reportedly destroyed: Tibetan monasteries have been set upon and shrines destroyed. Those who refused to adopt Chinese communist ideology were killed. Chinese farm workers were transferred to Tibet. Tibetan fiscal policy and social structures were restructured in line with Chinese systems.

Between 1966 and 1969, the Cultural Revolution activated by Mao Tse-tung spread to Tibet, bringing with it its share of destruction and persecution: Tibetan temples were looted and destroyed, and religious adherents were beaten, tortured, raped and killed in public.

The Development Plan for Western China, launched on 17 June 1999, was dubbed the “second invasion of Tibet”. It forced the Tibetan nomads to settle down in urban areas where they were no longer able to make a living through their traditional means of subsistence.

Moreover, the massive Chinese migration to Tibet driven by the Chinese authorities transformed these Tibetans into an ethnic minority. The objective of the Chinese policy in Tibet was therefore aimed at assimilating the Tibetans and their ancestral culture into the Chinese social, political and economic model.

In Tibet, even today, there still exists persecution and restriction of religious beliefs and practices. Possession and distribution of images of the Dalai Lama are strictly prohibited and violence against Tibetan monks and nuns take place daily.

On 28 June 2005, the Tibetans and support groups filed a criminal complaint against eight defendants including Hu Jintao; Jiang Zemin; Li Peng before the Spanish National Court (Audiencia Nacional) on the basis of the principle of universal jurisdiction for crimes of genocide, crimes against humanity, torture and terrorism, committed against people of Tibet in the late 1980s and 1990s.

Following a challenge of its competence, on October 9, 2013, the Spanish National Court confirmed its jurisdiction over the case. On 19 November 2013, the Spanish National Court issued an arrest warrant against Chen Kuyian, Deng Delyun, Jiang Zemin, Li Peng and Shi Qiao for their alleged involvement in the genocide in Tibet. On  February 10, 2014, it was confirmed that five arrest warrants were being issued.

In later years, Li tried to minimise his role in the bloodshed, presenting himself as merely executing decisions made by Deng Xiaoping –- who died in 1997 –- and other party elders, according to extracts from a diary published in 2010 and attributed to Li. But in the “Tiananmen Papers”, apparently secret Communist Party documents made public in the US in 2001, Li instead appears to be the instigator of the crackdown, striving to convince Deng to send tanks to the square. The authenticity of these documents has never been proven, and Communist authorities block discussion of the crackdown.