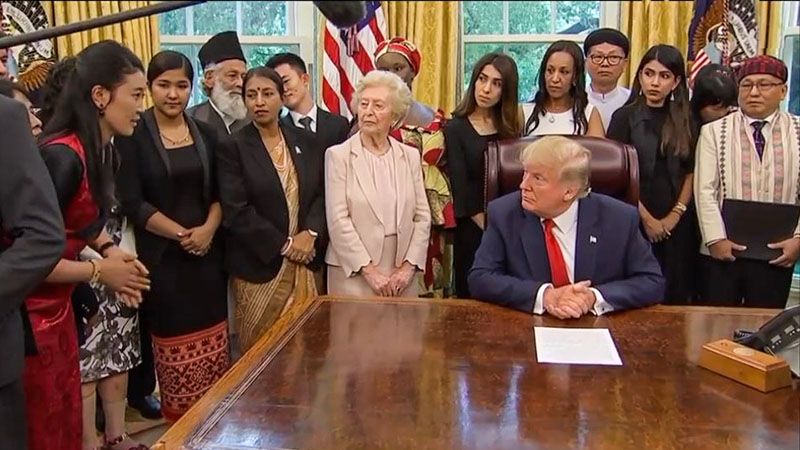 Nyima Lhamo whose uncle Tulku Tenzin Delek Rinpoche died in Chinese prison in 2015, speaking to U.S. President Donald Trump during a meeting in the Oval Office of the White House, U.S.A., on July 17, 2019. Photo: TPI

Washington DC — Nyima Lhamo, a Tibetan activist, whose uncle Tenzin Delek Rinpoche, one of the most prominent Tibetan religious leaders died in a Chinese prison, has strongly appealed to the United States President Donald Trump for continued support for Tibet and support for the return of the His Holiness the 14th Dalai Lama to Tibet.

During the second Ministerial to Advance Religious Freedom held July 16 to 18, 2019, the Tibetan issue received attention at the highest level of American leadership. Nyima Lhamo, who fled Tibet to tell the world about Chinese injustice in her homeland, delivered her message to President Trump in the White House on the afternoon of July 17, 2019.

She also thanked the US President Donald Trump and his leadership for their support for Tibet during a meeting in the Oval Office of the White House. The 30-minute meeting involved many survivors of religious persecution from around the world, including people from China, Myanmar, Iran, Tibet, Turkey, and North Korea.

Meeting the president in the Oval Office alongside other survivors of religious persecution participating in the ministerial, Nyima Lhamo spoke up spontaneously to ask for US support for the people of Tibet.

She emotionally appreciated the US President for understanding of her broken English. "I am very sorry, my English is not good," she told the President.

A very humble and positive reaction from the US President, interestingly he has encouraged her saying "that's fine. Your English is actually very good."

The second Ministerial to Advance Religious Freedom which is believed to be the World’s Biggest Event on Religious Persecution was concluded in Washington DC, USA, on Wednesday, July 18, 2019.

While Vice President Pence and House Speaker Nancy Pelosi (D-Calif.) focused on the plight of the Tibetan people in their remarks at the ministerial, President Trump heard directly for the first time from a Tibetan about the need for US support for the Dalai Lama.

The meeting was hosted by the US State Department and attended by 100 nations and 1,000 participants. Around 30 survivors from 19 countries around the world where their religious freedom are denied and they are suffering under different forms of social and political discriminations. Those survivors of religious persecution from all faiths were given a global platform in Washington DC this week.

Nyima Lhamo, a human rights defender and the niece of the late Tenzin Delek Rinpoche has given her testimony at the meeting on China's brutal crackdown on Tibetans inside Tibet. Later President Donald Trump invited all the participants to his Oval office and listened to stories of each participant.

Nyima Lhamo shared her story of Tibetans inside Tibet being tortured, imprisoned and sufferings of Tibetans under Communist China. Tibetans around the world expressed their solidarity with her after she appealing President Trump for U.S. support for Tibet and the return of the His Holiness the 14th Dalai Lama to Tibet.

"In the future, the leaders of other countries must follow Trump's exemplary of listening to the sufferings of suppressed people in this world. Trade should not be the only interest of the leaders in the world. Thank you, President Donald Trump, to the listening out the story of sufferings," Bagdro, a former Tibetan political prisoner wrote on his facebook.

President Trump was joined by White House Chief of Staff Mick Mulvaney and Sam Brownback, the administration’s ambassador at large for international religious freedom at the meeting which took place on the sidelines of the annual Ministerial to Advance Religious Freedom, a conference hosted by the US State Department to bring together leaders from around the world to discuss the challenges facing religious freedom, identify means to address religious persecution and discrimination worldwide, and promote greater respect and preservation of religious liberty for all.

Nyima Lhamo is a human rights advocate and the niece of the late Tulku Tenzin Delek Rinpoche, a highly revered reincarnate lama and one of the most prominent Tibetan political prisoners who died in a Chinese prison in July 2015. Nyima and her mother, Dolkar Lhamo, were detained by Chinese authorities for publicly questioning the cause of her uncle’s death and demanding an investigation. Nyima fled and arrived in India on July 24, 2016, leaving behind her mother and 6-year-old daughter.

Despite the risks, she continues to speak out about her uncle’s death while in Chinese custody, appealing to the international community to call on the Chinese government to investigate the circumstances of his death. She has raised her uncle’s case at the UN Human Rights Council, briefed international officials, visited more than ten countries to pledge her case for her uncle, and testified before the U.S. Congress.  Nyima’s family continues to face harassment by authorities, who threaten continued persecution of her family unless she stops her advocacy.