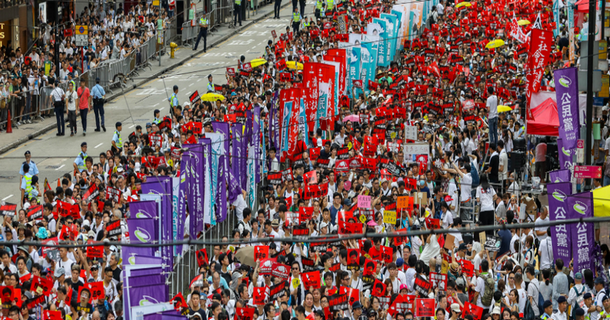 On Sunday, June 9th, one million Hong Kongers (more than 13% of the population) marched against this bill. Photo: RSF

Paris-based international press freedom watchdog Reporters Without Borders (RSF), along with 73 other NGOs, urges Hong Kong to abandon the bill that would allow China to extradite journalists and their sources.

In a letter sent on June 6th to Carrie Lam, Chief Executive of Hong Kong, Reporters Without Borders (RSF) and a coalition of 73 NGOs call for Hong Kong to immediately withdraw the extradition bill, which is scheduled for a second reading this Wednesday, June 12, at the Legislative Council (LegCo).

On Sunday, June 9th, one million Hong Kongers (more than 13% of the population) marched against this bill, which, if passed by the pro-Beijing majority LegCo, would allow China to extradite residents or visitors, including journalists and their sources. China holds at least 111 journalists under life-threatening conditions.

“The Chinese regime has shown on multiple occasions that it needs no solid grounds to punish critical voices,” says Cédric Alviani, the head of RSF’s East Asia bureau. “If such a regulation was adopted, Beijing would no longer have to resort to abduction, and would simply be able to seize whomever they wish to silence under a false accusation.”

See the joint letter in its entirety, in English and in Chinese.